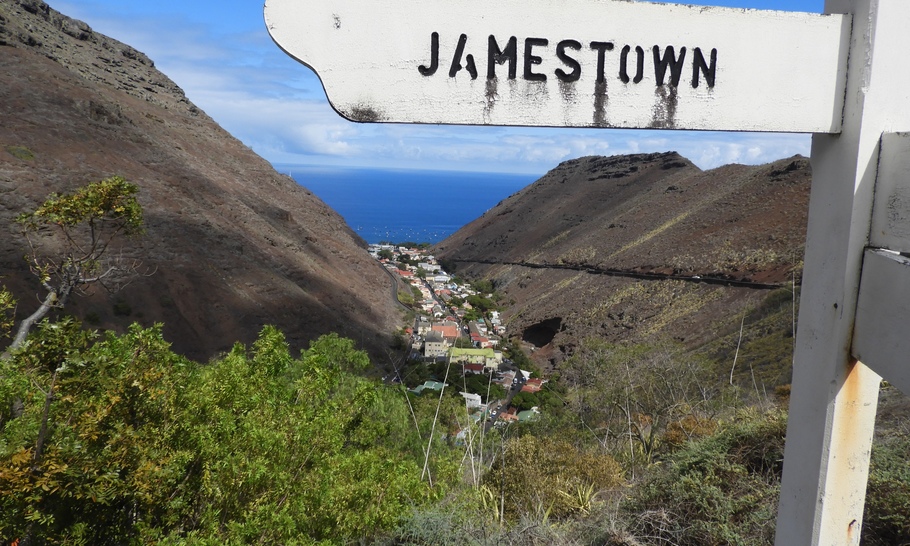 St Helena is being billed as “The Secret of the South Atlantic”. The 200th anniversary of the death — on the island in May 1821 — of the exiled French Emperor Napoleon Bonaparte should bring a much-needed increase in tourists. Tourism is also supposed to boost efforts towards the island becoming more self-sufficient and less isolated. If this can drag the island out of an economic slump, then so much the better.

Since discovery in 1502, until the start of commercial flights in October 2017, the sea route had been the only way to reach St Helena. At its peak more than 1,000 ships a year visited on the way to and from India and the Far East via the Cape of Good Hope. That declined after 1869 with the opening of the Suez Canal.

In February 2018 the famous Royal Mail Ship RMS St Helena, that also carried passengers on a five-day voyage to the island, ceased operations after 28 years. The replacement MV Helena calls every month but with limited passenger berths. Visitors to the island now use the weekly Johannesburg flight (and from December 2019 to the end of February 2020 a Cape Town weekly flight was added).

The new £285 million airport, that took five years to build, had an infamous start and test flights. It was dubbed as the “world’s most useless airport” due to high winds and difficult landings. (My flight, the first of 2020 direct from Cape Town, unfortunately turned back due to a cracked windshield. It made the front page of one of the two newspapers on St Helena).

With a population of around 4,300 — and up to 18,000 linked abroad — St Helenians, or Saints as they are often known, wave and say hello to visitors. As I listened in a supermarket to Saint FM, one of the two radio stations “on island” (as they say), I heard Sir Simon McDonald, the head of the UK’s diplomatic service visiting the island for three nights, say at a press conference (all 15 minutes broadcast in full on 13 January 2020): “You can fall in love with St Helena in less than 24 hours.”

St Helena is a volcanic outcrop and its varying nature from semi-arid desert to jungle, to rolling green hills, is beautiful. The wildlife is unique: you can swim with docile whale sharks, watch the endemic Wire Bird and visit Jonathan, the 187-year-old tortoise, the world’s oldest-recorded living land animal, who since the new year has had his own Twitter account (@Jonathan_onStH).

The fascinating history of St Helena stretches from Portuguese discovery, to East India Company ownership, to the celebrated exile and death of Napoleon on the island.

The Napoleon connection was my main reason for visiting. After his defeat at the Battle of Waterloo in June 1815, Napoleon was exiled to St Helena and arrived in October 1815. He died and was buried there in 1821. In 1840, his body was exhumed and returned to France.

Undoubtedly for history buffs, walking in the footsteps of Napoleon is a must. The honorary French consul who’s lived on the island since 1985 maintains all the three key sites. A German tourist from a visiting cruise liner wrote on 9 January 2020 in the visitors’ book for Longwood House where Napoleon spent his exile: “The best prison of the world/nice place.”

I also walked into the archives at the government offices in Jamestown and asked to see the burial register for May 9, 1821, when Napoleon was buried. An archivist had the book in a cupboard by her desk and after donning white gloves was able to show me the entry beginning: “Napoleon Buonaparte, late Emperor of France…”

There are high hopes now with the airport operational and fibre optic cable due in 2022. McDonald said the island is at an “inflection moment” and these two events would shape the “economy for the foreseeable future.” He said there were also “a lot of very promising leads in high-end green tourism”.

Governor Dr Philip Rushbrook, who arrived in May 2019, backs that up. “The task now for St Helena is to make the most of the airport. This has to be by attracting more people to come to the island, be they expatriate Saints, adventurous tourists and innovative investors. In time, more flights will come, too. Access through the airport is a key driver to increase economic growth, tourism and foreign investment.”

He adds: “The challenge is to get international tour operators to learn about and promote the variety of our tourism opportunities and to encourage a sustained number of tourists to come to the island.”

The aspirations could still be very tough. At the moment, a weekly flight can bring in a maximum of 98 passengers. There are grand plans online, open for public consultation, for “Trade Winds,” an 18-hole golf resort and hotel plus 140 to 150 luxury villas with “tropical oceans views”. But the developer is insisting only a direct flight from Europe will make the concept viable.

In 2019, St Helena also experienced its lowest rainfall since records began in 1977 – 286.2mm recorded for the year. On January 22, this year, the island’s government reported that water stocks were “dangerously low at 40,000 cubic metres or 35 per cent,” and that the island had “become reliant on water extracted from bore holes”.

Tour guide Aaron Legg also pointed to the historical problem of people leaving. Of his GSCE year in 2000 only 28 out of 128 were still on the island. Average wage from full-time employment fell by 4.8 per cent to £8,410 in 2018/19. Many on St Helena go overseas for work (especially to the Falklands, Ascension Island, and the UK) and often return to renovate or build properties and retire.

“Be careful for what you wish for,” Legg said, warning that the island may not be ready for the much-needed tourism boost. The three main hotels have just 56 rooms between them.

On the flight to St Helena I met the honorary French consul, a man from Glasgow in to fix the Jamestown swimming pool (successfully done with press release published in the local papers), two French engineers in for a six-month project to install preventative rock fall netting, South African tourists, an American woman (who also has Somaliland and Russia to tick off this year for her more than 200 places visited so far), a woman working for the St Helena National Trust, a London couple in for a three-month stay to help relatives set up high-end campsite, and returning Saints.

One Saint was back for a visit for the first time in 45 years. His first walk up the main street had taken two hours with all the greetings and questions. He found it easier to sit outside his guesthouse so he could catch up with the well-wishing passers-by. Governor Rushbrook said: “I always say to prospective visitors, ‘come to St Helena now before others discover us’.”