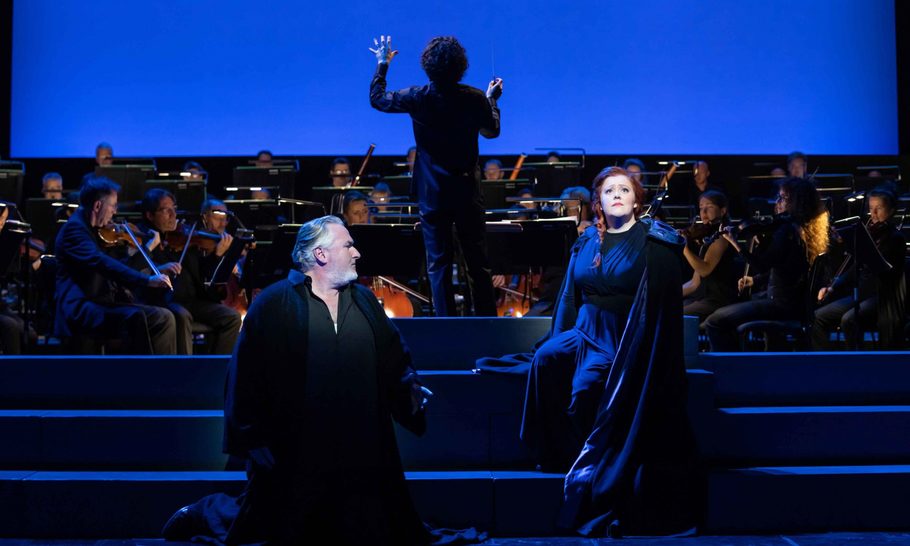 At the end of this semi-staged concert performance, where the orchestra filled the usual stage plus more, Robin Ticciati kept his baton raised and there was complete silence. A moment of tranquility until the illumination of the London Philharmonic Orchestra gently decreased to total darkness and someone dared break the silence with applause. Without an orchestra pit, Wagner’s most intense opera wove its psychological magic, exploring the dichotomy between darkness and light, day and night, consciousness and unconsciousness, body and soul.

Tristan und Isolde may be the answer even if you don’t know the question, and as Ticciati says, “There’s something almost supernatural about what’s going on in Wagner’s music”. It is his first time conducting a Wagner opera, and he is clearly entranced, referring to “waves of dissonance, suspense and release, all embodying and enacting the all-consuming experience of love”.

From the philosophy of Schopenhauer that gave structure to Wagner’s search for a meaning behind the world we experience, and the relationship with Mathilde Wesendonck that informed his expression of a love that can never be fully realised, this opera is arguably best stripped to its musical essentials — without stage sets, and, in particular, without “clever” directorial interpretations getting in the way. I have seen it staged beautifully, but also witnessed some horrors, so it was a joy to sit back and appreciate superb singing and sensitive lighting, that started and ended in complete darkness.

Tristan himself was heroically sung by New Zealander Simon O’Neill, whose acting has developed enormously over the past few years. This was a man wracked by emotional tension from beginning to end — a magnificent performance. As Isolde, Finnish soprano Miina-Liisa Värelä sang beautifully and reserved herself for the Liebestod at the end. Here she showed reserves of power that lifted her voice magically, as she sang immer lichter wie er leuchtet (ever brighter he shines), glorifying in an ethereal vision of her deceased lover — her voice cut through the music and floated above it, before receding into the distance. The superb bass of John Relyea showed King Marke as noble, deceived, yet generous, and his soliloquy in Act Two was riveting. There was very fine support from Shenyang as Kurwenal and Neal Cooper as a stern Melot, whose depth of ambition exceeds his intelligence, and Karen Cargill as a glorious Brangäne whose voice shone with emotion and care for her mistress.

Semi-staged it may have been, but I have rarely seen the business of the potions in Act One so clearly staged. Love and death were both dark red, and this opera, of course, expresses the two interchangeably. Ticciati’s musical direction, informed by a pilgrimage to the Vienna State Opera to look at Mahler’s own conducting score, was sublime. A wonderful final production for Glyndebourne’s 2021 season that has been blessed by a very serious concentration on the music and singing, as it should be.