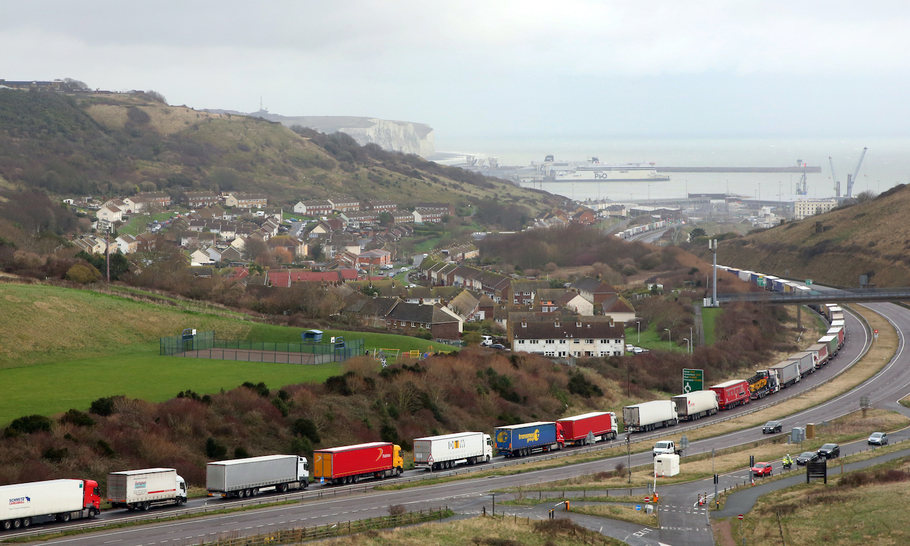 He has accepted a second deal offered by Michel Barnier. Last year he agreed to accept EU conditions on Northern Ireland, but sold the concession to an electorate tired of the May-Corbyn era of dead-end politics and won a big majority. Now he has again accepted most of the conditions Barnier set, but will sell the deal as a British victory in the midst of pandemic gloom and lockdown misery

His master stroke of shutting down access to Europe on Sunday exposed what a no-deal might look like. Johnson ordered his negotiator, David Frost, to drop the UK ’ s hard line on fish and give Macron a nugatory offer on fish quotas and a long transition, going well past Macron ’ s re-election in May 2022.

The deal offers nothing for Scotland’s strong financial services sector, nothing for creative or educational services which trade with Europe, and hardly any improvement for Scotland’s fishing communities. It kills the small but profitable Scottish seed potato sector. More important, it does not deal with the main Scottish beef with London, namely the loss of the right of Scots to live, work, or retire in warmer climes in Europe, despite almost two-thirds of Scots voting to remain in 2016. Boris Johnson will be accused of betraying core Scottish interests, right through to the Scottish Parliament election in May 2021.

Even under the deal, there will be hundreds of millions of new forms to fill in. The EU has around 45,000 functionaries working in all its institutions – the legendary Eurocrats. Now the UK will have to hire an estimated 50-60,000 bureaucrats, which private firms and taxpayers will have to pay for, to handle the complicated forms over customs or rules of origin. This deadweight of unproductive bureaucrats will add significant costs to any firm hoping to continue doing business in UK.

They keep full access to the lucrative UK market, without having been required to put any pressure on Angela Merkel to grant any favours to Boris Johnson. There are no reciprocal guarantees for Japanese car firms in the UK, who may find that tough border controls to check rules of origin of components, to ensure that all have been made in the UK, make exporting from England less profitable.

By any definition, this deal binds in the UK with thousands of pages of legal rules to stay very close to EU norms. The ageing league of Brexit loyalists — men like John Redwood, Bernard Jenkin, David Davis and Nigel Farage — have come to the end of their 25-year journey. The UK is no longer an EU treaty member. But there is no evidence of the shining new future they once promised. Johnson has split the Brexit camp asunder – offering key jobs in government to Brexit fanatics like Priti Patel or Dominic Raab. They can now be safely reshuffled. Others, like Dan Hannan or Gisela Stuart, have had their mouths stuffed with ermine and dumped in the Lords, where they can cause no trouble.

While manufactured goods and most food will keep access to the Single Market – Marmite will still be on sale without tariffs – there is no guaranteed future for the millions of qualified, innovative professionals in the financial sector, banking, insurance, investment funds, management consultancy, legal advice, medicine, architecture, video, films, events organisers, creative workers like musicians and singers, all of whom have been working freely in Europe for decades without let and hindrance. They will now have to negotiate deals on equivalence or other access one by one with the EU 27, who will be quite happy to keep at bay British service providers to the benefit of their own nationals.

All current access to travel, live, work, study or retire in Europe is now finished and the deal does nothing to help British citizens. Visa-free tourism will continue but not to work or live, and the EHIC card, which guarantees free medical treatment on the Continent, will cease to apply. Brits take 73 million flights a year to different European destinations, from weekend golf outings in the guaranteed sunshine to stag and hen party trips. Now these will require expensive medical insurance. Around two million Brits have bought second homes. Access to these will be limited to 90 days in every 180. Driving licences and tests in Spanish and other European languages will have to be passed.

Right now diplomats and other representatives of all UK ministries working out of the UK office opposite the Berlaymont in Brussels have 24/7 automatic access to all EU commission offices. British ministers and diplomats in Washington or other global power centres have far greater influence when they can tell opposite numbers what EU policy is likely to be, not least as Britain is seen as a global power player. That is over, as German and French diplomats will be of more use if a foreign power wants to know what the EU is up to.

In 2016, Marine Le Pen put the Union Flag on all her social media outlets as she celebrated the Brexit vote. Nigel Farage was ecstatic as were anti-Europeans such as Germany’s AfD or Italy’s Matteo Salvini. Yet despite Boris Johnson’s boast at a pre-referendum rally in Wembley that hundreds of millions on the Continent would follow the example of Brexit Britain, the opposite has happened. Marine Le Pen dropped her 2016 insistence that France should leave the Euro and a referendum be held on French membership of the EU. Voters in Europe have looked at the mess Brexit has made of Britain and voted down anti-EU politicians.