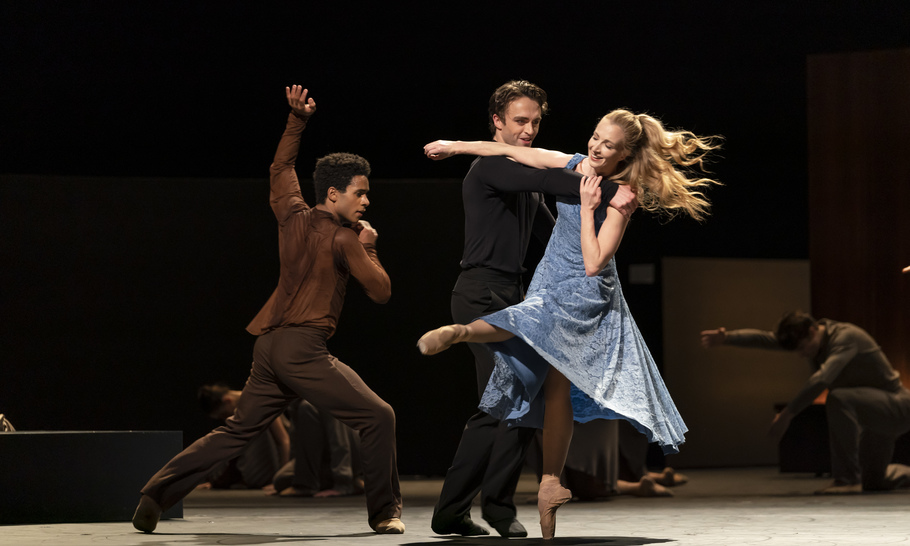 “O body swayed to music, O brightening glance, How can we know the dancer from the dance?” is a line from Yeats quoted in connection with The Cellist, Cathy Marston’s new ballet (pictured) about Jacqueline du Pré. The musician and the instrument become one, as we see her journey from childhood when she first heard the cello on vinyl recordings, to her passion for playing the instrument and her later struggle with multiple sclerosis. Yet Ms Marston has not created a ‘historical bio ballet’, rather a story distilled to its essentials, in which the narrative thread is blurred, but the two principal relationships are captured:  du Pré’s emotional affair with the cello and the physical affair with the conductor (in real life Daniel Barenboim). The three principal performances, by Lauren Cuthbertson as Jacqueline, Matthew Ball as the Conductor, and Marcelino Sambé as the cello, were superb, well-complemented by Kristen McNally and Thomas Whitehead as du Pré’s parents, Anna Rose O’Sullivan as her sister and Emma Lucano as the young Jacqueline.

Marston already experimented with personifying a cello, using a male dancer, in a work for the Royal Danish Ballet a couple of years ago, and it works extremely well. This is a choreographer of great imagination, tackling a very difficult subject, and despite some moments where there is over abundant action on stage, Marston succeeds. Music put together by Philip Feeney, and sensitively conducted by Andrea Molino, uses extracts from Rachmaninoff, Beethoven, Fauré, Mendelssohn, and of course Elgar, with an excerpt from his cello concerto forming a significant scene in this hour-long ballet. Beautifully played by Hetty Snell, who joined the Royal Opera House orchestra less than two years ago, this delightful interlude was spoiled by too much action among the dancers, distracting attention from the music. Yet the whole ballet is a remarkable achievement by Cathy Marston, and I look forward to its revival in years to come.

It was preceded by Jerome Robbins’ beautiful 1969 work for the New York City Ballet, Dances at a Gathering, first produced by the Royal Ballet the following year. The eighteen short pieces by Chopin, played on the piano by the head of the Royal Opera House’s music staff Robert Clark, provide a wonderful framework for the expression of Robbins’ delightfully original choreography. Such choreography allows ten dancers to appear in solos and smaller groups, until right at the end when all ten are on stage before finally pairing up into couples and slowly leaving the gathering. There are, as Robbins himself emphasised, no stories, plots or roles, simply dancers being themselves and dancing with one another across the stage. Costumes by Joe Eula are simple and elegant, providing a combination of colours that enhance the dance combinations and give character to the dancers — all senior members of the company whose performances were sheer delight.

This replaced what was originally supposed to be a new ballet by Liam Scarlett, but Dances at a Gathering has always been an exercise in perfection and something not to be missed. It was wonderful, and for many people one new ballet is enough for one evening.

Performances of this double bill continue tonight with the same cast, and with two casts until March 4, with a live cinema relay on February 25 — details here.