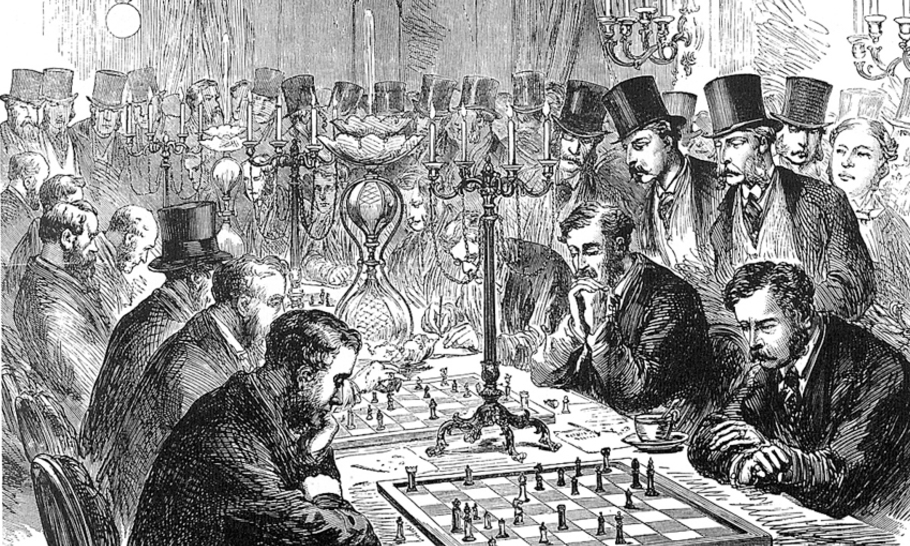 The annual contest between the teams of Oxford and Cambridge Universities is the oldest surviving fixture in the chess world. Often described as The Boat Race of the Brain, this clash was founded in the 1870’s, and the first encounter was actually attended by those chess Titans of the day, Wilhelm Steinitz, Johannes Zukertort and, of course, the man who had put English chess emphatically on the global map, Howard Staunton.

Staunton had soared to prominence in 1843, when he travelled to Paris to challenge Pierre Saint Amant, the heir of the great Philidor and hereditary wielder of the proverbial chess sceptre. Staunton annihilated the incumbent, in a match which bore every hallmark of being a forerunner of modern world championship contests. Staunton was immediately hailed as “The Champion” by his proud compatriots, who could now claim that our traditional foe had not just been defeated militarily at Waterloo (in 1843 The Duke of Wellington still had another eight years to live) but that English Brainpower was also superior to our Gallic rivals. Staunton could rightly say with Julius Caesar, when he subdued Gaul, veni, vidi, vici!

Yet, for some reason, the English have since remained extraordinarily reticent about Staunton, permitting the Austrian Steinitz to claim to have been the first official world champion, when the rights of Staunton and Morphy, to name but two, surely deserve precedence. Strangely, Staunton is more revered for the use of his name in describing the standard tournament chess pieces than for his prowess over the board.

It was no accident, of course, that Staunton attended the inaugural Varsity match. Apart from his chess skills, Staunton was a noted Shakespearean scholar and had also produced a weighty and well researched tome on education in England. Staunton’s attraction to a new venture, which combined chess and the halls of academe, is, therefore, easy to understand.

Coincidentally, a further injustice hangs over the annual match, not just the perennial failure by chess chroniclers to grant Staunton his full recognition as world champion. This is the ongoing omission by Oxford University (who narrowly trail Cambridge in the overall series) to award Half Blues to their chess playing representatives . These have included such luminaries as Grandmasters John Nunn, Jon Speelman and David Norwood, to mention but a few.

In contrast, Cambridge have awarded the prestigious Half Blues to their squad for many decades. Hence, Jonathan Mestel, Michael Stean, Bill Hartston and the author of this article, can all pronounce themselves grateful for the recognition bestowed by our Alma Mater.

Meanwhile, the players from Oxford still suffer from the fact that the sporting powers that be in the city of lost causes are more impressed by the “plash of the oars” (Henry James) than by the wave of the brain. I trust that this infelicity will soon be consigned to those other lost causes for which Oxford is notorious.

The 2019 match will be staged on Saturday 2nd March at The Royal Automobile Club in Pall Mall. As usual, the play will unfold under the benign tutelage of traditional organiser, Henry Mutkin, a former Oxford player, and Stephen Meyler, Chair of the RAC Chess Circle, the most successful competitor in the London Clubs League. Spectators are welcome, if suitably attired, and battle commences at noon on the day.

The big question this year was whether Oxford would be able to rely on the presence of its new recruit, Hou Yifan, a Rhodes Scholar from China, one time vanquisher of Judith Polgar and former female world champion. The tempting counter attraction for Hou was the German Bundesliga, also scheduled for the same weekend. Condottieri in the Bundesliga are actually paid by their clubs, so it was down to the relative magnetic power of a fistful of Euros, or the immortal prestige (unpaid) of joining a British tradition which goes back well over a century, hallowed by the spirits of the Giants of the day.

We are all (even Cambridge alumni) delighted that Hou has made the honourable choice !

With Hou now confirmed in their ranks, Oxford will be the favourites to win. Without her contribution, Oxford’s fortunes in this year’s match might well have joined the lost causes for which they are so celebrated.