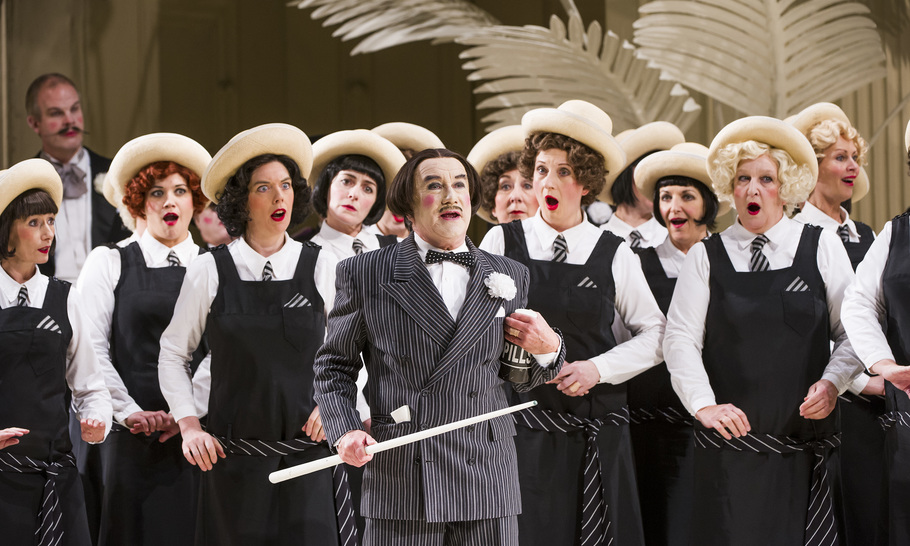 A scene from The Mikado @ English National Opera 2015 and due for a revival in 2019. ©Tristram Kenton

Can the English National Opera survive, or indeed thrive, and does it deserve to? It lost part of its Arts Council grant, shortened its season at the Coliseum to make way for popular musicals in the summer, and made one or two unforced errors in staging disastrous productions — La Bohème with the main characters shooting up on drugs and lying comatose for the main arias in Act I comes to mind. It had to be replaced with the earlier, far more sensible and engaging production.

The zeitgeist from Central Europe says everyone knows these operas, so artistic creativity demands you present the public with a new concept. Something they can get their teeth into, something critics can argue about, with the notion that all publicity is good publicity. But in opera it doesn’t work that way. If you know the opera, you’re either going for the conductor and singers, or if it’s a much-loved production to see singers of lower calibre but possibly superb musicality and engaging theatricality. If you don’t know the opera, then an outré production won’t help your appreciation of it, and yet the ENO has the task of bringing in new audiences to revitalise opera in this country. So, what did it think it was doing, trying to be in the vanguard of wacky directorial re-interpretations?

The ENOs future will depend on whether, during the next couple of seasons, it can both attract new audiences — which it is working hard on with free tickets for under 18s — and keep them. With this in mind, here is the company’s plan for the 2019/20 Season: three popular revivals (The Mikado, Carmen and Butterfly), and seven new productions. Four of these are versions of the Orpheus myth: Gluck’s Orpheus and Eurydice (in the 1859 version for contralto with the wonderful Sarah Connelly as Orpheus) directed by ballet choreographer Wayne McGregor; Offenbach’s riotously irreverent Orpheus in the Underworld, directed by Emma Rice; Harrison Birtwistle’s Mask of Orpheus, first seen in 1986 but staged this time around by artistic director Daniel Kramer; and finally Philip Glass’s Orphée, directed by Netia Jones. By mid-October the first three will all be in performance, so if they are well-staged they could create useful publicity. The Gluck opera, in a different Paris version, was produced by the Royal Opera in 2015, and with its extensive dance music plus Wayne McGregor’s appeal to a youthful audience it should make a good start to the season. The Offenbach is a romp, the Glass may well attract those who saw his Satyagraha and Akhnaten in recent years, and as long as Birtwistle keeps some control over the production of his own opera its performance could be a great success. The other new productions are Verdi’s Luisa Miller, directed by Barbara Horáková-Joly; Mozart’s Marriage of Figaro, directed by Joe Hill-Gibbins; and Dvořák’s Rusalka, directed by Tatjana Gürbaca. All three of these are young directors whose careers started this century.

According to Daniel Kramer all ten operas “touch on something very relevant today: the rise of the feminine in the world around us and within ourselves”, a comment that seems otiose since the feminine is important in most operas, and female participation in the professional world has been steadily increasing for a long time. In staging and conducting it may have moved more slowly, but the question is whether the new season will help to attract and retain a younger audience. Chief executive Stuart Murphy claims 47 per cent of the audience is coming to the ENO for the first time, and it takes its position as England’s national opera company seriously, bringing in schoolchildren from different parts of the country, with an average age of 11, to understand its work. This is all part of an outreach to a younger audience, where free tickets in the balcony to the under 18s are becoming a permanent Saturday feature and will now be tried on Friday evenings and opening nights.

The ENOs heart is in the right place, and this past weekend it won the Olivier Award for Outstanding Achievement in Opera for the ensemble in Porgy and Bess. This production was universally acclaimed, but the question is whether the company can create a range of interesting productions that don’t try to be so edgy they fall off the cliff. In some countries, at one time, opera was as popular as musicals are today, and the ENO needs to make the most of the audience that comes to the London Coliseum in the spring and summer when musicals take over and the main company performs elsewhere. Such people are unlikely to be seduced by the absurd Salome that opened this season. It’s an opera I adore, but I stayed away.

What I do love, however, is the ENOs efforts to do something useful with its time away from the Coliseum when the musicals take over. Last summer, for example, the company performed The Turn of the Screw at Regents Park open-air theatre, which provided an admirably spooky atmosphere when the light faded in time for Act II, but future plans for performances away from the Coliseum are still under wraps. The ENO promises to reveal them soon.