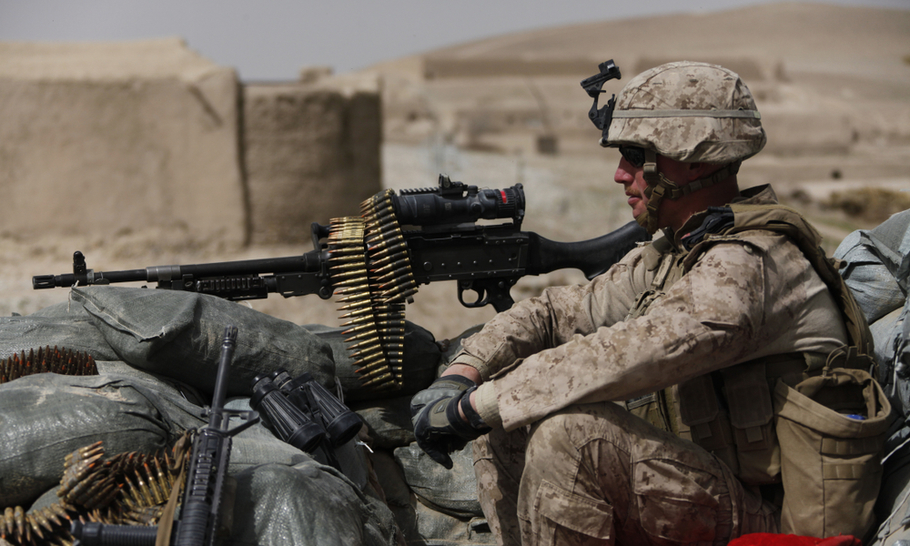 US marine in Kajaki, Afghanistan, 2012. (Shutterstock)

As Nato leaders met in London this week to discuss the future of the trans-Atlantic alliance, they might have considered the cost, in lives and money, of the wars of the 9/11 era. According to new research, that cost has been heavy. Since 2001, up to 801,000 people have been killed. The cost to American taxpayers has been an unimaginable $6.4 trillion.

The research, produced by the Costs of War project at Brown University’s Watson Institute for International Studies, is a two-decade effort to collate the human and financial impact since the attacks on the United States by al-Qaeda.

The project’s overseers note that the figures on deaths do not include people whose remains have not yet been, and may never be found. The numbers do not include indirect deaths — those caused, for instance, by hunger, lack of water, war-related disease and other factors. Nor does the financial accounting include the ongoing cost of caring for victims of war, including veterans, beyond the life of the project, which ends in 2020.

The figures include American troops, contractors, national military and police, and civilian government personnel, as well as troops from allied nations. Also included are opposition fighters, journalists and media workers, and workers with humanitarian and non-government organisations.

This latest report from the project comes as the administration of President Donald Trump has largely withdrawn its military from Syria and is pursuing withdrawal from Afghanistan.

The invasion of Afghanistan by a Western coalition of mostly Nato member nations was led by the US to punish the Taliban for enabling the 9/11 attacks. It was the first use of Nato’s Article 5, which posits that an attack on one member is an attack on all. Since then, more than 7,000 US military personnel have been killed in Afghanistan, Pakistan, Iraq, Syria, Yemen and other theatres of counter-terrorism military engagement, the report says.

Trump has recently re-started contact with the Taliban, after calling off a year of talks that were part of a purported “peace process”. The recent hostage-prisoner swap — two Western university professors kidnapped in Kabul in 2016 for three senior al-Qaeda operatives — has been seen as a confidence-building measure that could lead to some progress in bilateral contacts.

But the Costs of War research serves as a reminder of the expansion of US counter-terrorism operations to some 80 countries since the Global War on Terror was launched. This expansion has tracked the concomitant expansion of global Islamist terrorist activity, which has seen al-Qaeda morph into such fundamentalist jihadist organisations as Isis, which remains a focus of Western counter-terrorism efforts, as well as other affiliated groupings like al-Shabaab, which operates largely in East Africa.

The report finds that, before the 9/11 attacks, the US was in budget surplus. “The US went into deficit spending after the 9/11 attacks, thus increasing the Federal budget deficit and the national debt. This pattern of war spending and borrowing have continued throughout the wars,” says the report, titled, “United States Budgetary Costs and Obligations of Post-9/11 Wars through FY2020: $6.4 Trillion”.

The ongoing costs of caring for tens of thousands of veterans of the post-9/11 wars, and interest on borrowing to pay for the wars will continue into the foreseeable future, it says, “even if the United States withdraws completely from the major war zones by the end of FY2020 and halts its other Global War on Terror operations”.