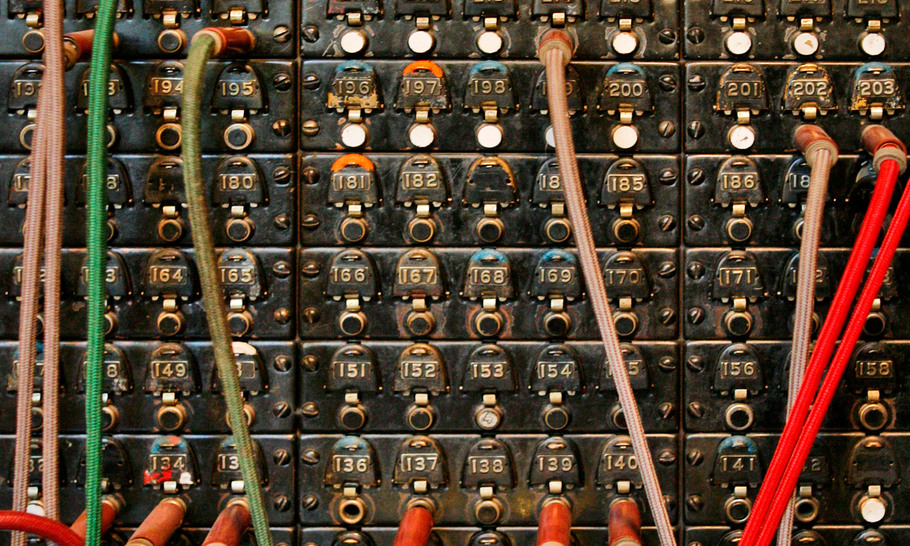 Industrial research is conducted, no doubt, to give rise to new products which will benefit mankind, although some may argue that a more likely objective is for the product, when developed, to be sold for ready money. I want to talk about one particular project, close to my heart because I worked on it for several years from the late 1950s onwards. The aim was to provide more communications channels. At the time that meant more telephone lines. It would be an understatement to say that when this project started, the number of long distance telephone lines available in the UK was pitifully small.

If you wanted to talk to someone overseas the call had to be ordered, possibly hours in advance, via an operator. To make an intercity (“trunk”) long-distance call was somewhat easier. If you were lucky you could be connected immediately (also via an operator), although the chances were that all the available lines would be busy. The first transatlantic telephone cable was laid in 1956 with a capacity of 36 lines. Telephone lines between London and the major British cities might have amounted to a dozen, but not more.

Worldwide, the race was on to change the status quo. In the UK the main player was STL (Standard Telecommunications Laboratories). By good luck, after arriving in England in November 1956 as a refugee from Hungary, I had got a job in this laboratory. The aim was to increase the number of telephone lines from a dozen to something much larger. The actual number bandied around at the time was 100,000, a big jump.

“ Because we think we can do it,” replied Leonard. “ We know how to do it. It might take a decade or two, but succeed we will.”

“No, not now. We are anticipating the time when we shall be able to transmit not only telephone conversations but data, images, television channels, movies, everything. There is no limit to the amount of communications mankind wants to use. We are a communicating species. The first target of our laboratory is to lay copper pipe all the way from London to Birmingham for the benefit of the Brummies, and then proceed further to Manchester to please the Mancunians. I ’ ll show you the waveguide the whole enterprise depends on.”

I did not know who the Brummies were, nor the Mancunians, but I thought that as a newcomer I should not query everything. I went with Leonard to see the copper pipe. It had a two-inch diameter: it looked quite ordinary but apparently it had a critical property: low attenuation. Attenuation is a measure of how quickly the wave is absorbed as it propagates along the guide.

What permitted to use this technique was the progress in generating electromagnetic waves of higher and higher frequencies. By 1956 it was possible to generate waves having frequencies of 80,000,000,000 oscillations (80 GHz in engineer-talk) per second which, in principle could have carried 20 million telephone channels. The target was only hundred thousand, so we had a bit of leeway.

I know it is difficult to imagine how this worked, whether it was 20 million channels or a mere hundred thousand. The way to imagine it is to regard the telephone channels as sitting tightly on the carrier (the 80 GigaHz electromagnetic wave) and having a free ride, while the wave travels with the speed of an electromagnetic wave. In terms of what is going on, it ’ s a bit mysterious. The nearest analogy I can think of is the number of angels sitting on the head of a pin. However, in that case the pin is usually regarded as being stationary. So we need the added insight to imagine the pin travelling at the same speed as the wave.

By the end of the 1960s everything was ready, everything worked. There was an experimental line 28 miles long which happily carried many, many telephone channels. The next thing was to actually lay the copper pipe between London and Birmingham. Negotiations had already started about the precise position of the line and to whom rent should be paid.

And then came a bolt from the clear blue sky: don ’ t build anything! Stop! Don ’ t spend another penny! Wait! Your copper contraption is already out of date! We have an alternative solution that costs less, is cheaper to build, and can even provide many more channels. It is superior to yours in every respect. It was the advent of optical fibres, made of glass. Compared to our 2- inch copper pipes , their diameter was barely visible — thinner than a human hair.

They were already known about in the 19th century. Their property to trap light was discovered independently by David Colladon in Geneva and Jacques Babinet in Paris. Glass manufacturers had produced plenty of them more recently for medical applications in endoscopes. I have never been interested in the side of engineering concerned with production, but I cannot resist the temptation to describe a rather unconventional way of producing very thin fibres. In the early 1890s, Charles Vernon Boys, a professor at what later became Imperial College, London, stuck an arrow to one end of a glass rod, heated it until it was soft enough, and then shot the arrow to a distance of 30 metres. He was rewarded by a fibre 30 m long and a thousandth of a millimetre thick.

If fibres were so well known, why was their emergence equated to an unfriendly bolt from heaven? Because it was an unsuspected competitor. Up to the 1970s their use for communications was out of the question. First , there were no suitable light sources. The recently invented lasers were too bulky for mass communications and had a short life. Secondly, the light put into the fibre was absorbed in a few metres, whereas for communications it had to deliver light for a distance of tens of kilometres at least.

It took some time to solve all the problems. By the late 1980s the proponents of fibre optics were confident enough to lay a fibre line across the Atlantic that carried a modest 40,000 telephone channels. It worked happily for 14 years, apart from occasional malfunctions due to sharks dining on them. The next fibre line was made shark-proof. Many more have been built since. The present count is over 400 submarine cables with a total length of about 1 million km. They carry 99 per cent of Internet traffic.

But how hazardous is industrial research? All companies big and small want to bring out new products. It often happens that these products are competitive and the market decides later which one will survive. The copper pipe versus optical fibre story is quite different. In the late 1950s nobody in the business thought that copper pipes had any conceivable competitor, so it was safe to pour in a lot of money and effort. Engineers were sure that the only way large numbers of communication channels could be realised was via those very special copper waveguides. The idea of lasers, a sine qua non for the operation of optical fibre networks, was still lying in the unconscious depth of the minds of a few physicists. But, gradually, all the technical problems with optical fibre networks were sorted out. The death sentence for the copper pipe was clearly pronounced.

Close to two decades of tireless research had come to nil. I had spent only two years on it, but I still felt that it was my project. How did it feel when it all came to an end? I was sad, but more than that. It was as if I had possessed and cherished a beautiful Ming dynasty Chinese vase. Then along came a big man with a big hammer and broke it to pieces while I was watching. I remember talking to a “fibre-research” man at a conference a few months later who added insult to injury: “Have you laid your copper pipe between any two cities as yet?” he asked. “ No,” I replied. “ What a pity,” he said. “ We could have put our fibres into your pipe.”