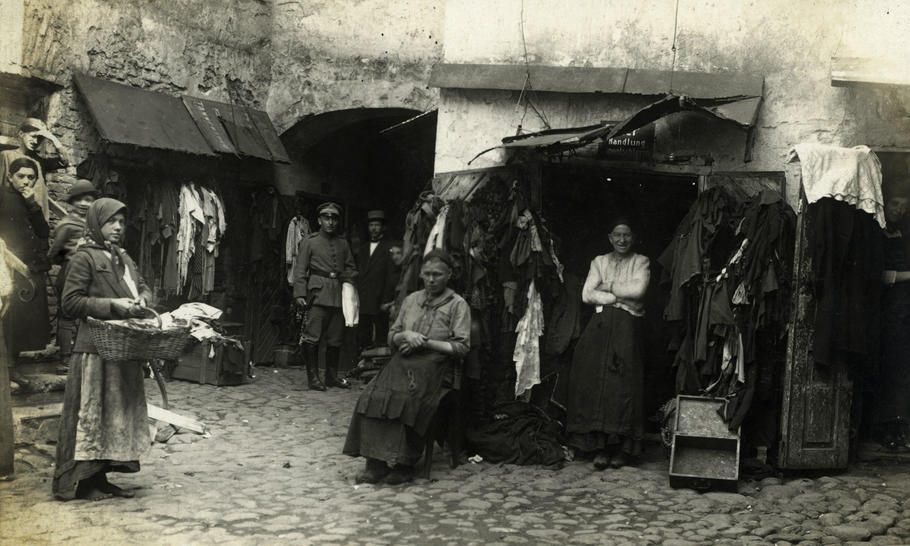 The handsome medieval city of Vilna, known as the “Jerusalem of Lithuania,” had for centuries been the heart of Jewish culture in Eastern Europe. Before World War Two there were 80,000 Jews in a population of 200,000; after the war only 600 remained alive. Justin Cammy writes that during the war the city was controlled in disastrously “rapid succession by the Red Army, independent Lithuania, the Lithuanian Soviet Socialist Republic and Nazi Germany [in June 1941] before it was liberated by the Red Army in July 1944.”

Abraham Sutzkever (1913-2010), the leading modern Yiddish poet, lived in occupied Vilna until the liquidation of the ghetto in September 1943. During that time his mother was beaten and killed; and his infant child, conceived for the survival of the race, was murdered immediately after its birth by Nazi doctors. He and his wife then escaped to the forest and spent the winter with the Soviet partisans. In March 1944 Sutzkever, considered a cultural treasure, was helped by the influential Soviet-Jewish writer Ilya Ehrenburg. A Russian hydroplane dramatically rescued him from behind enemy lines and flew him to Moscow.

He wrote his ghetto journal in Russia, where it was published in 1946. In July 1944 he returned to Vilna to help rescue other Jewish cultural treasures that were hidden from the Nazis. In February 1946 he testified at the Nuremberg war crimes trials, and in September 1947 he emigrated to Tel Aviv.

Though the Jews were innocent and had not committed a crime, the Nazi murderers wanted to destroy the Jewish people and all traces of their culture. They enjoyed absolute power and took sadistic pleasure in robbing, humiliating, persecuting, tormenting, torturing and killing their helpless victims. The soldiers fanatically performed their duties, in some cases in order to avoid being sent to almost certain death on the Russian front. The Nazis paid Christians a bounty of ten roubles for every Jew kidnapped and destined for extermination. They were actively assisted by the anti-Semitic Lithuanians, who stole Jewish property and took over their empty flats.

Officials of the Judenrat, the Jewish Council that served the Nazis, claimed they were trying to save Jewish lives. In fact, they identified all the Jews, rounded them up, collected their gold and valuables, and persuaded them to obey orders, which made the killing more efficient and freed German soldiers to fight the Allies. Sutzkever fiercely declares that the head official “was only a tool in the hands of the Gestapo. While trying to help the Jews, he actually assisted the Germans in sucking the life from the ghetto… Those who were temporarily left alive were rendered so spiritually dead, without a soul or a conscience, that they blindly followed German orders.”

Some Jewish doctors and lawyers escaped death by becoming chimney sweeps, who were able to leave the ghetto, work all over the city and carry secret messages. Other Jews even hid under nun’s habits during the fatal searches. Though Sutzkever knew he was probably doomed and lived a kind of posthumous existence, he felt he had to survive the anguish of silence and continue to testify in his poetry.

The Houdini of the ghetto, who actually lived to the age of 97, had many amazing escapes from death. He hid in a coffin, in a common grave and in a lime pit. He jumped out of a high window. He walked right past a drunken guard. He avoided a hail of bullets. He acted like a madman to distract soldiers, who shouted: Wer ist der verrückte Jude? (“Who is that crazy Jew?”). Like the film characters in “The Third Man” and “Kanal”, he hid in the sewers, stood up to his neck in filth and almost drowned in the strong currents. Desperate lovers met in the dark sewers and “pursued their romantic relationships.” He was also hidden by a Christian peasant, a complete stranger, who treated him like her own son, smuggled bread to his starving family and risked her life to save them.

Sutzkever writes short dramatic sentences, describes the physical effects of fear — “My head was about to explode, my throat was tight as if it were being choked by a fist” — and gives brief journalistic accounts of the horrific events that he actually experienced or heard from eye-witnesses. The Nazis paraded mentally ill, frightened and agitated patients through the streets of Vilna as typical specimens of the decadent Jewish race. Bloody corpses were dragged through the prison with iron hooks. He was forced to strip naked and dance around a fire of burning Torah scrolls. He saw the mass grave where Jews were buried and seemed trying to escape: “It started to move. It grew larger minute by minute. The bodies were swelling and raising the earth above them.” Nazi doctors drew blood from Jewish children for transfusions to Germans and “extracted the most delicate facial skin for use in cosmetic surgeries on wounded and burned German soldiers.”

When life became unbearable, one man hanged himself with his phylacteries (straps worn during prayer). Another man, asked if he needed anything, replied, “Give me poison.” The Nazis treated prisoners of war with equal cruelty. Three hundred Russians “were barefoot. Their hands and feet were frozen, and their bodies were ravaged by starvation. They were tossed one on top of the other. Many were already dead. Others were still moving, barely breathing.”

The worst horrors took place in Ponar, a resort five miles outside Vilna, where a river wound through beautiful scenery that had inspired Napoleon en route to Russia and the Polish national poet Adam Mickiewicz. After the ghetto was destroyed and all the inhabitants shot, the Nazis began to burn 80,000 bodies in Ponar to eliminate all evidence of their atrocities. Their victims also included priests, nuns, Roma, Poles, Lithuanian partisans, Soviet prisoners and uniformed Germans. After the corpses were burned, the remains were ground into fine powder and mixed with yellow sand. Sutzkever found and kept in his pocket a pouch of thick sticky grey human ashes. At one point, a Nazi guard was bitten by his own mad dog that also had to be shot. The Nazis even killed a German Oberscharführer (Senior Squad Leader), who had performed his duties, was no longer necessary and knew too much.

The Jewish victims were not entirely passive, and Sutzkever took an active part in their surprisingly effective sabotage campaigns. The Resistance fighters stole bullets, pistols, rifles, machine guns and gunpowder to make bombs from German factories, bunkers and armoured cars. They blew up a train and killed 200 soldiers, blew up a bridge and killed another 200. Unfortunately, the Resistance could not fight inside the ghetto. Their Commander was betrayed and surrendered when the Nazis threatened to kill the all the 20,000 Jews left in the ghetto. Instead, they broke his arms, scorched his hair and gouged out his eyes before killing him. Torn between overwhelming sorrow and a burning desire for revenge, Sutzkever had the chance to smuggle a gun into the Nuremberg trial and execute Hermann Goering. But as a Russian citizen he would have antagonised the Americans, who would not have believed he acted on his own. He was forbidden to exact revenge, and Goering took poison before he could be hanged.

Justin Cammy’s 54-page Afterword and 63-page endnotes are excellent. But he includes scores of obscure names in this historical record, which clog the narrative, are meaningless to Anglophone readers and should have been deleted. Cammy does not explain one vital question: how did the four well-known mass murderers in Vilna escape execution and even prison after the war, or avoid capture by the Israeli Mossad? Bruno Kittel disappeared in 1945. No prison sentence or death date is given for Horst Schweinberger. Martin Weiss was released from a German prison long before serving his life sentence and lived until 1984. Franz Murer, “the butcher of Vilna,” sentenced to 25 years of hard labor, was released from Russia, returned to Austria and lived until 1995.

Sutzkever’s valuable book avoids two crucial questions. He describes an exceptionally attractive 18-year-old girl who was forced by a guard to strip naked, pulled out of the execution pit, held by the hand and told “a beautiful girl like you must not die” — before being shot in the head. But a great many of the guards raped the women before killing them, and Sutzkever mentions only one case, an 8-year-old girl “forced into sexual relations.” More significantly, though he wrote a “Kol Nidre” poem on Yom Kippur, he does not ask why the omnipotent Jewish God allowed his Chosen People to be exterminated.

The poignant themes of From the Vilna Ghetto to Nuremberg, which ranks in horrific power with Emmanuel Ringelblum’s Notes from the Warsaw Ghetto (1958), are the Jews’ attempt to retain their humanity when brutalised and reduced to slavery, their desire to preserve the physical remnants of Jewish culture and the need to bear witness to the Holocaust.

Jeffrey Meyers’ four grandparents were born in Vilna. If they had not left for America in the 1890s, he would not be alive to write this review