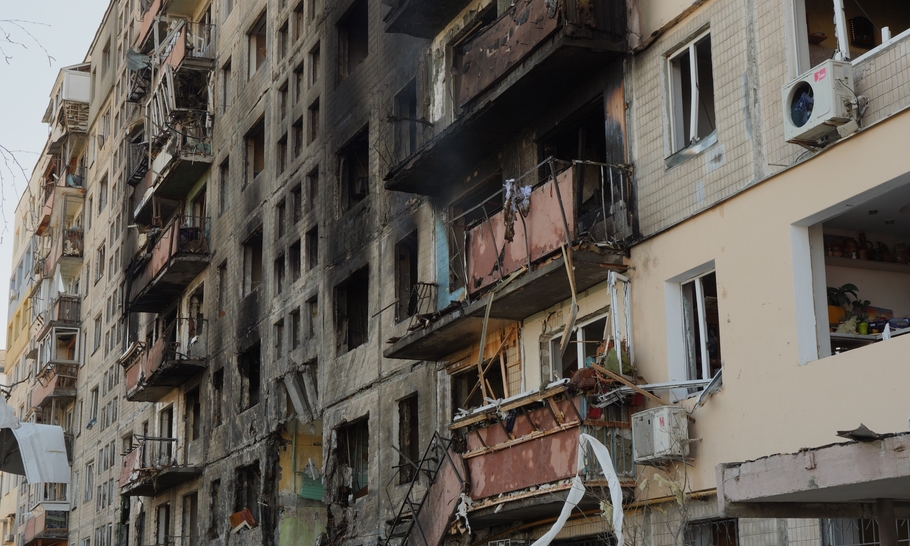 Vladimir Putin’s television address to his own people on Wednesday has given the world a glimpse into the abyss. We can now see more clearly than ever the lengths to which the dictator’s mendacity will carry him and the depths of his depravity. The manner is no less chilling than the message: the dead, unblinking eyes, the puffed-up, pasty face, the robotic, menacing delivery, with only an occasional flick of the wrist to add emphasis when referring to his enemies. This is the gaze of a cold-blooded killer.

Thousands of Russians have had enough of him. They are quietly fleeing the country, by any means available, leaving everything behind. Millions more would like to join them, but are too attached to their jobs, homes and families. These people know that they are being fed lies, as the intrepid Marina Ovsyannikova briefly informed them on state television before being arrested, like many thousands of other protesters. Some who have voiced their opposition to the war have had the sinister letter “Z” daubed on their front doors. It is a fair assumption that most Russians in urban centres, with access to media that is not controlled by the Kremlin, have more than an inkling of the truth about what is happening in Ukraine. They do not need President Biden to tell them that their own President is a war criminal.

But Putin will give no quarter to Russians who do not support his war. He has told his ministers and regional governors that “the Russian people will always be able to distinguish true patriots from scum and traitors”. Loyal citizens will, he says, “simply spit them out like a gnat that accidentally flew into their mouths, spit them out on the pavement.” Even more ominously, he warns that “a natural and necessary self-purification of society will only strengthen our country”. This is the language of Stalin’s purges and terror.

For those who have left Russia, he has nothing but contempt. They are caricatured as decadent, playboys who “have a villa in Miami or on the French Riviera, those who can’t get by without foie gras, oysters or so-called gender freedoms”. Unlike true patriots, these émigrés “by their very nature, are mentally there. They are not here. Not with our people. Not with Russia.” Once again, the dictator is tapping into a long tradition of Russian xenophobia, which successive Soviet leaders mobilised against their enemies in exile. He elides the distinction between pampered oligarchs and courageous critics who have emigrated only to escape his clutches. It helps his rhetoric that most Russians can only dream of such luxuries and resent the elites who enjoy them. Even his own daughter has a villa in Biarritz, but he cares more about tarnishing those he has banished than justifying his entourage. Like every tyrant, he prefers to be feared rather than loved.

Putin’s denunciations of his enemies abroad are no less vehement than those of his internal opposition. The West, he claims, is seeking to “dismember” Russia in order to render it a “weak and dependent country”. One of his justifications for the invasion is a classic conspiracy theory: NATO had been plotting to rearm the Ukrainians, who renounced their nuclear arsenal under the Budapest Memorandum of 1994 — the very agreement, signed by the US, UK and Russia, that he has just trampled upon.

“It was a real threat. In the foreseeable future, with foreign technical assistance, the pro-Nazi regime in Kyiv could have got its hands on weapons of mass destruction,” he claims. “The target, of course, would be Russia.” This plot is a malicious fabrication, based on nothing more than Zelensky’s statement of the obvious, that the Budapest treaty is defunct. Putin, though, is a past master at feeding the paranoia to which his increasingly isolated compatriots are prey.

It is when he comes to the resistance to his armies in Ukraine, though, that Putin’s pathological imagination is given free reign. Ignoring the facts — that the Ukrainian President is Jewish, that some members of his family perished in the Holocaust while others fought the Germans, that there are no fascists in the Ukrainian Government and no far-Right parties in the Ukrainian Parliament — he takes it for granted that Russians will go along with his fantasy that he is re-fighting the Great Patriotic War against Hitler.

He is still claiming that Zelensky’s “Nazis” are engaged in “terrorism” against Russian separatists in Donetsk, after a missile landed there on Monday, killing 20 civilians — an allegation denied by Kyiv. The dictator’s accusations against the Ukrainians uncannily echo the crimes of Russian forces, acting on his orders: “They strike indiscriminately, in the squares, with the fanaticism and frenzy of the doomed, like the Nazis, who in the last days of the Third Reich tried to drag as many innocent victims as possible with them into the grave.”

This, remember, is coming from the man whose air force has just deliberately bombed the theatre in Mariupol — a known refuge with the word “children” painted outside in huge letters for pilots to see — immolating anything up to a thousand people, including many children and pregnant women. Even before the casualties from this atrocity could be counted, the official civilian death toll in that one besieged city had far exceeded 2,000 and the real number is probably at least twice as high, with the dead being buried in mass graves. In his speeches, Putin makes no mention of the suffering his troops have inflicted on Ukraine. In his eyes, they are all merely “Nazis”.

And so when he repeats, as he did on Wednesday, that his objective is the “denazification” and “demilitarisation” of Ukraine, these words take on a deeply sinister, indeed genocidal connotation. He intends to purge Russia of traitors and Ukraine of Nazis — but only he will decide who the traitors and Nazis are. A watching world, desperate for the carnage to end, should beware of reports that the Russians seem to be serious about a ceasefire. For the criminal in the Kremlin, such pauses are merely a pretext for regrouping and reinforcing his battered battalions, before renewing the onslaught with ever more deadly and illegal weapons — thermobaric missiles, cluster bombs, white phosphorus — designed to maim as well as kill, to spread panic among civilians and demoralise the defenders. He has not abandoned a single one of his demands; on the contrary, it is clear that he will stop at nothing. The “neutral”, i.e. demilitarised status he demands for Ukraine would amount to unconditional surrender, leaving the entire population at the mercy of the Russian secret police. As both sides know that is not going to happen, a fight to the death seems almost inevitable.

As the mask slips, what it reveals is the face of a pitiless psychopath. The dictator may be implacable, but — as I wrote here on the first day of this war — his time is running out. Everything that has happened since that day has hastened the demise of Putin’s increasingly dangerous despotism.