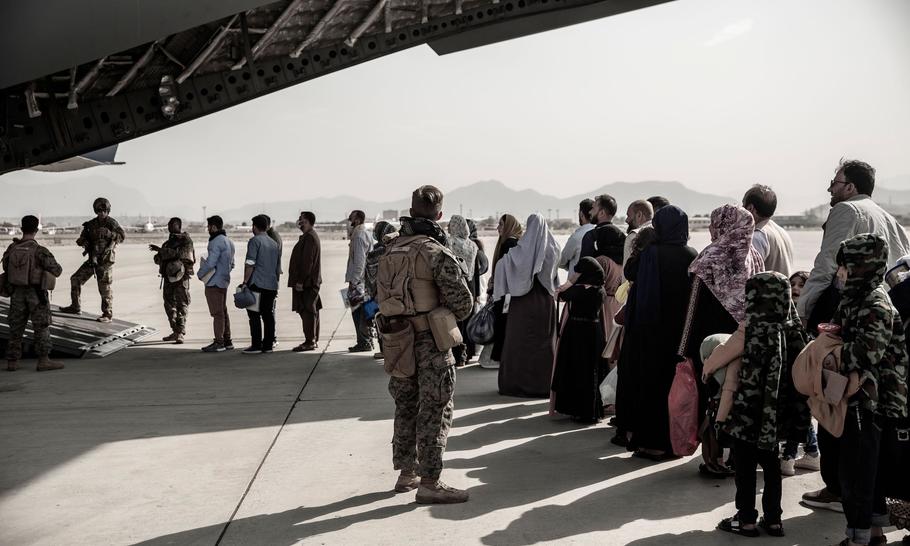 “Cowardly, disloyal, humiliating, ignominious, imbecilic, incompetent, shameful, terrifying, tragic. Capitulation. Debacle. Fiasco.” Accounts of the US-led departure from Kabul pulled no punches. And no wonder. It didn’t look like an organised withdrawal. Nor even a hasty retreat. It looked like a rout.

At the Hamid Karzai International Airport in Kabul, thousands of Afghans who had served their government or assisted US and other military forces and civil missions over the past two decades were desperate for their loyalty to be acknowledged and to escape what they knew was coming their way. Also crowding the checkpoints were thousands of others who simply wanted to get themselves and their families away from the awfulness of the incoming regime. And, as ever, courageous young soldiers – Afghan, American, British, French, German and others – tried to bring some level of order to the appalling chaos they saw before them, in the knowledge that they were in danger from a sniper’s bullet or, as was soon shown, a suicide bomb.

To ask “What does it all mean?” is otiose. The meaning is obvious; words and images from Kabul, seen and discussed around the world, showed a man-made human disaster. But there’s another question to ask – “What does it all mean for the West?” In the first place, for Western experts in “strategic communication”, it means that the management of the information pouring out of Kabul went very quickly beyond their control. But the real meaning of these words and images, which the West’s strategic leaders have so far seemed unable to grasp, is that pretty much everything associated with Western strategy is now in question and could stay that way for years to come.

The West’s strategy appeared either hopelessly ill-judged (in that it was thought that the Taliban would not take power as they did, nor so rapidly), or non-existent (in that the West simply did not care whether, or how, the Taliban took power). Rather than confront this awkward question, too many in strategic leadership positions in the West have shown themselves to be cloth eared and complacent, responding to the crisis with little more than wishful thinking, self-justification and blame-shifting.

In the UK, politicians, public officials and military officers are queuing up to explain that the exit from Afghanistan was a temporary politico-military malfunction, from which “lessons will be learned” before the normal service of strategic mastery is resumed. We are assured repeatedly that the Taliban surge was unexpected and unpredictable. Really? Ten years ago, following the second of two visits to Afghanistan, I made the following observation at a conference: “Withdrawal – whenever it happens – should be seen not simply as the desperate ending of the intervention, but as the most complex and dangerous part of the intervention. If this is mishandled or rushed, then we might be talking in five years’ time not just of the resurgence of some very unpleasant extremist and criminal groups, but of a regional conflagration.” My sense of foreboding was premature by five years, but if a visiting think-tank analyst could see things in this way then plenty of others, in more influential positions, will have come to a similar conclusion. And if the capture of Kabul was indeed so unexpected, why was there not only a “Plan A” for the evacuation, but also a “Plan B”? Was the capitulation unexpected, or were we preparing for it?

As well as presenting a wholly confused, if not disingenuous story, the UK’s strategic leadership has also demonstrated a spectacularly inappropriate choice of actions and words. One example was Dominic Raab, the Foreign Secretary, remaining determinedly glued (as some alleged) to his sunbed in Crete while the crisis grew. He also remains in post. But first prize must go to the UK Chief of Defence Staff, General Sir Nick Carter, for his insistence that the Taliban, an implacable enemy of Britain’s armed forces for many years, had “changed” and that British troops were now “happy to collaborate” with them.

The Taliban’s resumption of power in Afghanistan could have a very wide range of local, regional and international consequences, many of them incompatible with Western values and interests: the cancellation of human rights and liberties; the repression and maltreatment of women and girls; discrimination against ethnic and religious minorities; the dismantling of civic society; overreach by Pakistan and India’s reaction to it; the expansion of China’s geostrategic and political interests; and the recrudescence of state-sponsored, anti-Western, Sunni terrorism. In this dismal context, uncomfortable questions must also be asked about the West’s view of itself, about its reputation as a global strategic actor, about its strategic ambition and about the relevance of its vision for a world governed by something called a “rules-based international order”.

Both the US and the UK have presented themselves as expert in the high strategic art of combining “hard power” (i.e. the power of coercion and compulsion) with “soft power” (i.e. the power of attraction and persuasion). Does the Rout of Kabul suggest that either of these is as convincing as is claimed? In the UK, the March 2021 review of national security and defence offered a vision of a post-Brexit “Global Britain”, finally achieving its destiny as a “force for good in the world”, a “soft power superpower”, and a country with globally deployable “hard power”. After Kabul, are any of these promises, offers and assurances convincing? And who would rely upon them?

Speaking to Americans on 31 August, President Joe Biden saw the flight from Afghanistan as an opportunity for the United States to recalibrate its foreign and security policy, focusing on the challenge from China and Russia and on threats from terrorism, nuclear proliferation and cyber security. In Biden’s view the moment has come “to shore up American competitiveness to meet these new challenges and the competition for the 21st century”. But there’s the rub: neither the United States, nor even the West as a whole, will achieve these security goals acting alone. The “competition for the 21st century” will need help from allies and friends from around the world, perhaps even from a few adversaries and competitors. But after Kabul, who will now step forward?

Kabul in August 2021 was, to say the least, not a good look for the West, its values, its leadership, its capability, its staying power, its prospects and its interests. And it could get worse if the West’s leaders, unwilling or unable to confront their mistakes and the gravity of what has taken place, continue to insist that Kabul was a mere technical hitch and refuse to acknowledge that the West, what it stands for and its strategic credibility, is in deep trouble.

An earlier version of this essay was published by Cityforum in August 2021.