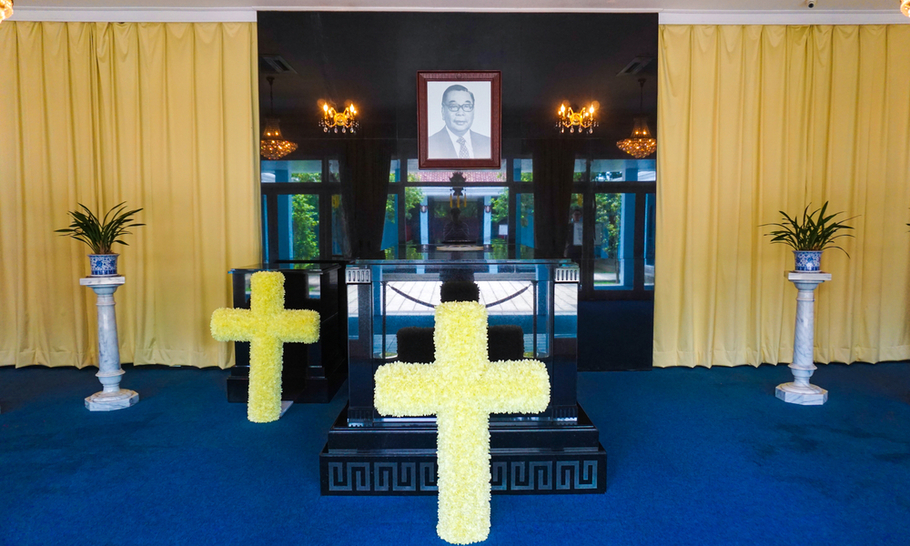 She was born in 1916 in the east of Belarus and fled war to find work in a heavy machinery factory in the centre of Russia. There, she fell in love with a lively, charismatic Chinese fellow, who spoke fluent Russian. After a short romance, they married.

Two years later, Faina Vakhreva found herself in Nanjing, meeting her father-in-law, the President of China, and joining the country’s first family. She never returned to Russia. With husband Chiang Ching-kuo (CCK), she went through the anti-Japanese war, the civil war and exile in Taiwan, where he was President from 1978 to 1988. She gave him three sons and a daughter.

Few people, even in Taiwan, know the extraordinary story of Faina, or Chiang Fang-liang as she is known in Chinese. My latest book, China’s Russian Princess, the Silent Wife of Chiang Ching-kuo aims to fill this gap in our knowledge.

Faina was born on May 15, 1916, in Orsha. The town was in the front line of the war between Germany and Russia. At an early age, she lost her parents and fled with elder sister Anna to the safety of Yekaterinburg, 2,300 km away. The city is on the border of Europe and Asia.

There she found a job at Uralmash, a giant factory built by the new Soviet government. CCK was her superior at the plant. After 10 years of study and exile in the Soviet Union, he spoke fluent Russian and could match his colleagues in singing and dancing — and almost in drinking.

The two fell in love and married in March 1935. At the end of 1936, Josef Stalin finally agreed to CCK’s request to return to China. He needed his influence with his father, Chiang Kai-shek (CKS), to make a common front with the Communists to fight Japan.

In April 1937, the young couple and their eldest son Alan arrived in Shanghai. They spent the next eight months in Xikou with the mother of CCK. Faina learnt Mandarin and how to be a Chinese wife. She rode horses and bicycles and swam in the local river — to the astonishment of the residents who had never seen a Western woman.

Next was a five-year assignment in a poverty-stricken area of south Jiangxi province, where CCK was commissioner. Faina was with her husband everywhere, meeting and entertaining people and raising money for the war against Japan.

CCK had an affair with one of his assistants. In May 1942, she gave him twin sons. But, in November 1942, she died at 29 after a severe stomach illness. One theory, never proven, is that she was poisoned to avoid becoming a public embarrassment to CCK. One son rose to become the Foreign Minister of Taiwan and another a distinguished professor of law.

The years after Japan’s surrender in August 1945 were difficult for Faina. She lived with her children and saw her husband irregularly. He was the closest adviser of his father during the civil war against the Communists. In April 1949, a military plane flew her and the four children to the safety of Taiwan. They had to wait eight nerve-wracking months before CKS’s brilliant pilot flew him and CCK 1,800 kilometres over enemy territory from Chengdu to Taiwan on December 16, 1949.

Life in Taipei was more normal. The family lived in a comfortable house in the centre of the city and went out to see American films and eat beef noodles in the evenings. They joined White Russians at the Astoria café to eat Russian food, drink, dance, sing, and forget their long exile.

“The two spoke Russian and Chinese to each other,” said Karen Chien, daughter of the owner of the Astoria. “She had a good capacity for liquor, better than her husband. She was easy to get on with, not like the wife of an official. She had no airs. She was very sociable.”

From the 1960s, CCK took more important positions and had less time to spend at home. In the fiercely anti-Communist atmosphere of the time, he kept Faina out of the public eye; what would US Republicans say if they found he had a Russian wife?

Faina relished her life as a mother and grandmother. But two of her three sons brought her much grief. Alan was a poor student and liked guns and drinking. He could not bear the pressure of being the eldest son of the “First Family”. On October 15, 1970, after a bout of heavy drinking, he fell asleep and did not take the pills needed for his diabetes. He suffered brain damage and spent five years in hospital.

CCK served as President from 1978 until his death in January 1988. Then, between April 1989 and December 1996, Faina lost her three sons to cancer. Her Christian faith enabled her to deal with these terrible blows. “She believed that God has chosen the time of life for each person,” said her daughter-in-law Elizabeth Chiang. “She was sad but not angry. She did not ask why. She did not ask why God had arranged it. She said this to comfort me after my husband passed away.”

Her daughter, living in San Francisco, invited Faina to move there. But she declined and returned to Taipei after a month’s visit. “Each day she sat in Father’s room,” said her third son, Eddie. “She looked at all the items there that had not been moved, treasuring her memories as if he was still there. This feeling could not be reproduced anywhere in San Francisco, however beautiful the conditions.”

Faina passed away in Taipei on December 15, 2004, aged 88. Leaders of all the political parties in Taiwan attended her funeral. According to her wishes, she was cremated and her ashes placed next to the tomb of her husband, in Touliao, southwest of Taipei. Who in Orsha could have imagined such a life?

For more information on Mark O’Neill’s book, email him at  ros8@netvigator.com