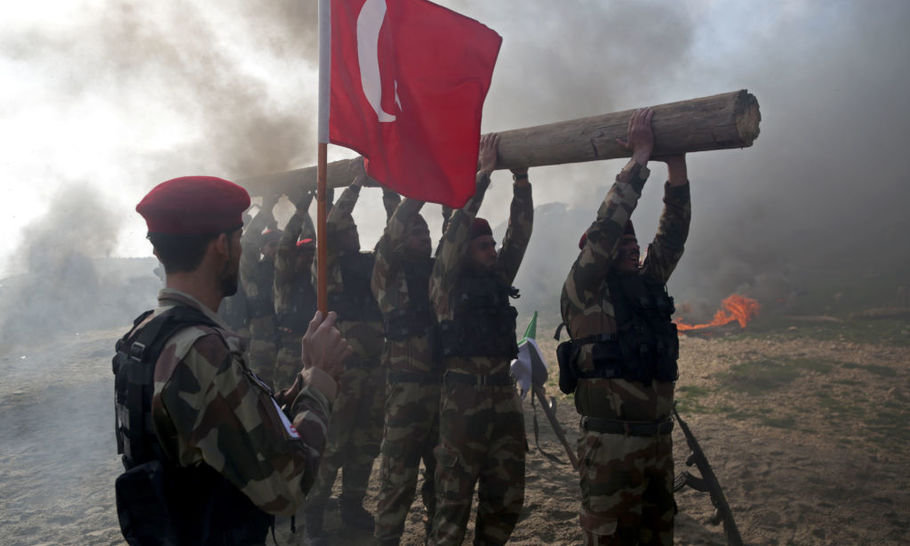 Vladamir Putin could never have imagined, when he ordered Russian interference in the US 2016 presidential election, that the result would be a US president who openly handed global power and influence to Russia. That President Trump has done so in Syria by betraying the Kurds, comrades-in-arms only 24 hours before, is a gift to those challenging America’s global position and regional security. Every country that is dependent on US security guarantees, from Japan to Britain, should be taking note.

Trump has managed to achieve the worst conceivable outcome. His stated aim to stop ‘endless and ridiculous wars’ and ‘focus on the big picture’ is at odds with the reality on the ground. In actual, numerical terms the targeted removal of 50 US special forces from the Syrian-Turkish border is a small act, albeit with profound reverberations (both tactically for the embattled Kurds but also strategically for the balance of power in the Middle East and further afield). Far from ending the US presence in Syria, it leaves around 1000 troops in the country, while rendering their service meaningless by abandoning any attempt to end the fighting or shape the country’s future.

To be fair to Trump, the situation he inherited in Syria was complex. Time and again, Turkey has been prepared to play off its membership of NATO against ever closeness to Russia, and sometimes acquiescence with ISIS in Syria. Indeed both Turkey and the Kurdish YPG seemed more motivated by a desire to remove Assad than to defeat ISIS. From the outset, the US wisely tried to avoid partnering with the YPG, whose porous membership crosses over with the PKK, designated a terrorist group in both Ankara and Washington. In Turkey’s defence, it is hard to envisage any other NATO member accepting such an alliance.

But, as is so often the case, the president has to make a subtle assessment of the situation and pursue policy that is a delicate balancing act, designed to limit the global consequences on US power and world stability. Trump is not that man.

Instead it is hard to interpret Trump’s action as anything apart from a capitulation to the demands of Erdogan. The Turkish president presumably managed to coerce and cajole Trump into removing the tripwire of US troops from two border towns, effectively tacit approval of a Turkish incursion. Trump’s decision speaks volumes about the changing nature of relative US and Russian power, marking the end of the US as a meaningful participant in Syria’s future, and perhaps the Middle East as whole.

The coming days will reveal whether Erdogan simply pursues a limited strike on the towns which US forces left, Ras al-Ain and Tal Abyad, both historically Arab and thus outside the auspices of the Kurdish YPG. This was presumably the plan outlined to Trump in private. If Erdogan goes further and fulfils his public declarations by forcibly creating a 300-mile-long, 20-mile-wide buffer zone this will presumably trigger Trump’s tweeted warning “if Turkey does anything that I, in my great and unmatched wisdom, consider to be off limits, I will totally destroy and obliterate the economy of Turkey”.

Whether Trump realises it or not, this is a precursor to a declaration of war on a fellow NATO member. Such a grandiose a threat is implausible and as such carries no real force. In reality we must look to Trump’s other tweets to understand America’s new stance. “Turkey, Europe, Syrian, Iran, Iraq, Russia and the Kurds will now have to figure the situation out…we are 7000 miles away.” In other words, the US has surrendered her hegemonic role to Russia and it is she who will now decide the scope of Turkey’s campaign.

Turkey would not realistically be able to pursue a wide ranging or long lasting military campaign without great power support. Iran is already signalling their displeasure by staging military manoeuvres on their shared Turkish border and the inevitable Kurdish insurgency would make such a campaign strategically, not to mention politically, disastrous for Erdogan over the longer term.

Russia now faces its own dilemma between the tactical commitment made to Damascus to regain all of its territory and the strategic desire to see US troops leave the country. Putin is a far more shrewd political operator than Trump, and is capable of turning such complexity to his advantage. This is already apparent in prudently-worded Russian statements which, while acknowledging Turkish security concerns, are careful to state that any occupation cannot be permanent. A short, geographically-limited Turkish campaign would satisfy Erdogan’s political and strategic aims, while further shaping the Syrian campaign to Russia’s advantage. It would allow Putin to achieve a series of gains which are unprecedented in the post-Cold War era, simultaneously pulling a NATO member closer into Russia’s orbit, cementing a Russian-led regional peace process (notable too for the US absence), securing her Mediterranean naval presence via the base in Tartus and the coup de grâce, the very public ceding of regional leadership by the US.