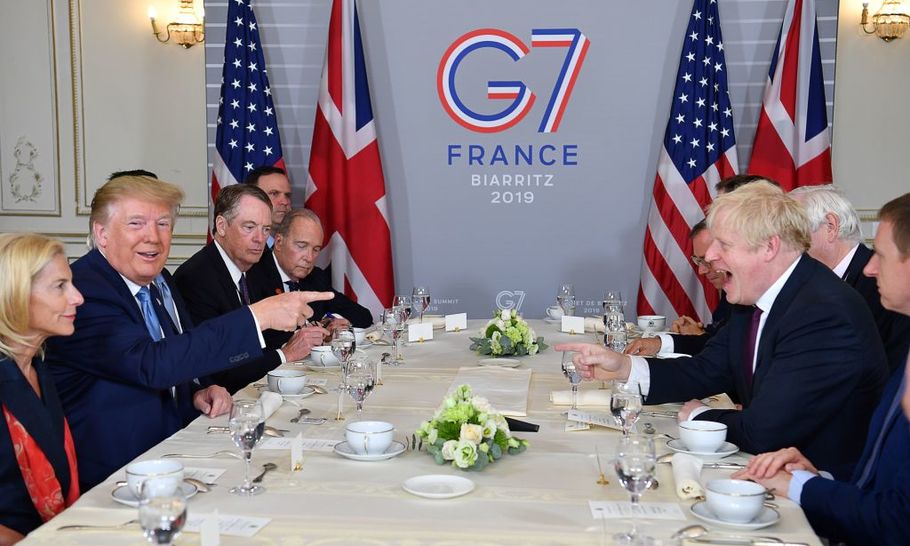 “We provide Warrior Care”. That is the motto of the Walter Reed Army Medical Centre which treated Donald Trump for Covid. All the medical care he needed was available in the White House, but Walter Reed must have been irresistible to the Commander-in-Chief, whose bad feet plus the good timing of his college years during the Vietnam War allowed him to dodge the draft. Trump didn’t much like it in hospital though. Let’s be honest, the spectacle he made of his short stay added to the joy of nations.

The little retinue of Walter Reed doctors in white gowns were particularly enjoyable, stepping out to present their evasive bulletins on the President’s health, for all the world like the spoof Busby Berkeley routine “Springtime for Hitler” in “The Producers”. The only thing missing was Trump sashaying down the steps under an arch of stethoscopes. He made up for this omission with an outing in his everything-proof Presidential limo, and then by a rather poor Mussolini impersonation on the White House balcony.

“The spectacle,” wrote the French Marxist philosopher, Guy Debord, in his 1967 Society of the Spectacle, “is the ruling order’s non-stop discourse about itself, it’s never ending monologue of self-praise”. It’s uncannily clear and prescient for a practitioner of a school of philosophy that specialises in complete incomprehensibility.

From 2004, Trump’s narcissism found a perfect outlet in reality TV. “The Apprentice”, followed by “The Celebrity Apprentice”, gave him a distinct national profile. By 2016, he was ready for campaigning by means of spectacular political entertainments — the rallies, the catch-phrases, the audience participation and the super-charged emotion. While the rallies have deep roots in popular entertainment, Trump’s use of tweets ensured almost permanent attention. The man who felt shunned by old money in New York and who was ridiculed by Obama, was able to voice the feelings of the forgotten, angry American white male, modelling his dream of success, living out misogynist sexual fantasies and promoting aggressive xenophobia. Trump is part old fashioned music hall artist, part modern troll, part sociopath. He knows, quite literally, how to make a spectacle of himself.

By the time of Trump’s irruption into Republican politics the scene had already been set by the growing power of infotainment. As Rupert Murdoch once said of his News Corporation: “We are in the entertainment business”, entertainment that smuggled in arbitration of the key social and political issues of the day. The communications revolution, which resulted in social media providing news in ever briefer, un-nuanced form, only accelerated the process. Spectacle in all its manifestations, news, advertising, entertainment, projected Trump and his rally performances as an iconoclast speaking powerfully to the condition of his political base. He had only to strut onto the campaign set to grab a national audience — and a big international audience. Around the world, people turned on their televisions for the frisson of watching the horror film that was American politics.

The merging of politics and entertainment in 2016 was not entirely new and certainly not unique. Ronald Reagan’s success in the 1980s was a notable earlier example — an experienced Hollywood movie actor who became Governor of California, then 40th President of the USA playing the nation’s elderly uncle. The story has it that Nancy would listen to Ronnie practicing his lines every evening for those impromptu avuncular speeches the next day. Yet Reagan’s star career path appears almost routine compared to Volodyar Zelensky’s cameo performances on the world stage. Zelensky played President of Ukraine in the Ukrainian TV comedy series “Servant of the People”, and was elected President of Ukraine in real life in 2019 and then unwittingly became a key player in the attempted Trump impeachment. Nearly three quarters of Ukrainian voters in the second round elected a man with no political experience whatsoever in the hope that as President he might — unusually — turn out to be “servant of the people”.

Turning to Britain, it is impossible to gauge how much Boris Johnson’s jokes and jolly japes entertained voters and contributed to his political ascent. It clearly did him no harm. Neither did his political entertainment column in the Daily Telegraph, his seven appearances on “Have I Got News for You” and the platform provided by becoming Mayor of London. He shares Trump’s skill at making a spectacle of himself, and some of his attributes. But he is a very different professional performer, modelling the national stereotype, the wry, humorous amateur, and skillfully playing his English audience. If and when Trump is out of office, Johnson’s carefully mussed-up hair, rumpled suits, Latin tags and attempt at Churchillian rhetoric will seem more pathetic than endearing.

The pandemic has revealed both Trump and Johnson’s fundamental incapacity to meet the demands of high office. Entertainment and spectacle as politics may have begun to lose their allure. What Ken Livingstone’s said to an interviewer, a week before the London mayoral election in 2012, is dawning on the British public: “This isn’t a race to elect a chat-show host”. The public in the US and Britain are becoming more aware that governing takes skill and not those of a stand-up comic. We may be entering a new era when dull competence, perseverance and fortitude of the Clement Atlee variety are respected again.

A diet of gas-lighting, social media, computer games and data theft risks encouraging fatalism, the citizen as helpless spectator. In the UK, Covid and Brexit on top of politics as spectacle, has accelerated withdrawal into private life. But community spirit and social action in reaction to the virus, Black lives Matter, proliferation of groups helping the poor, immigrants and asylum seekers, are signs that civic responsibility and a concern for justice have survived.

A Biden victory with Democrats controlling the Senate would dramatically change the political and social landscape of the US, unleashing a wave of political energy with a domino effect around the world. “Spectacle is the sun that never sets over the Empire of modern passivity”, Debord wrote ex cathedra in 1967. It must have sounded even more portentous in French at the time. Then came the events of 1968. The prodigious outburst of both spectacle and modern activism that 1968 brought suggests Debord is wrong. It is too early to give up and hide under the duvet.