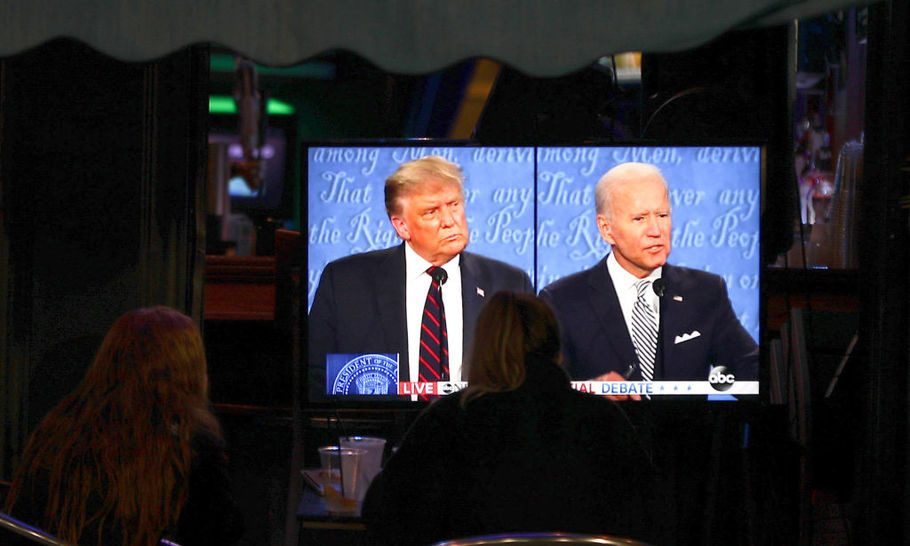 After three months in which the poll ratings of Donald Trump and Joe Biden have flatlined, two events in three days have — perhaps — shaken up the US election campaign. If last night’s extraordinary TV debate doesn’t do so, surely nothing will. Elections are not just, and sometimes not much, about policy and ideology. They reveal contrasts in character. Nobody can say that last night failed to provide viewers with an exceptionally clear contrast. Add in the possible impact of the New York Times disclosures of Trump’s tax affairs, and we could be in for a chaotic final month.

At times like this, it seems beside the point to look dispassionately at the data, but needs must. So let’s consider some numbers, perhaps starting by breathing deeply and counting to ten. The early evidence tells a story, but not necessarily how it will end.

Last night, as usual, CNN conducted an instant poll of voters who viewed the debate. Having run similar YouGov polls in British elections, I know the challenges they present. Obtaining a decent sample in just a few minutes is not easy. But it has one big advantage over later, more conventional surveys. It measures viewers’ authentic reactions before the rival camps have tried to spin what happened.

Last night, CNN found that 60 per cent considered Biden the winner, as against 28 per cent for Trump.

So game over? Not so fast. These were the results when CNN polled viewers immediately after the first debates in the last four presidential elections, and asked them who won the debate. The eventual winners of the election are shown in bold.

As those figures show, the Trump-Biden figures this time are virtually identical to the Trump-Clinton figures last time. We know how that ended. More generally, there is no link between winning the first debate and winning the eventual election. Sometimes a debate has produced a small boost to the winner’s support, but it has never lasted. In fact there is no evidence that any TV debate for many years has had a material impact on the vote.

It might be different this time: precedents are not iron laws and the tone of last night’s debate certainly takes us into dark new territory. Who knows whether it will affect the election when (if?) the dust settles. A New York Times survey on Sunday found that three in four voters regarded this as the most important election of their lifetimes. After last night, it’s hard to see that majority diminishing.

YouGov also asked whether they would approve of Trump paying no federal income taxes for 10 of the last 15 years. It’s worth quoting the answer options in full, because the words matter:

As long as he didn’t break any tax laws, it is perfectly acceptable: 35 per cent

Even if he didn’t break any tax laws, it isn’t appropriate: 52 per cent

In other words, Americans divide 3-2 against Trump, even when the issue is posed in the most favourable way towards him, assuming that everything he did was legal. After all, when he was challenged four years ago that he paid little tax, he replied by boasting that he was “smart”. That defence no longer seems to work.

That’s the polling evidence since the weekend. What does it mean for the final month of the campaign?

Joe Biden has two big advantages. First and most obviously, he is clearly ahead, both nationally and in the battleground states that will decide who occupies the White House. Even if the polls err as much as they did four years ago, Biden still wins if nothing changes.

Secondly, there seem to be far fewer voters this time who have yet to take sides. At this stage in the 2016 campaign, the 538 website’s aggregate of the national polls showed that 16 per cent either supported a minor candidate or were undecided. The equivalent figure this week is just 7 per cent. And the best explanation of why the polls, overall, have been remarkably stable for months is that the great majority of Americans took sides some time ago. The scope for late movement, barring a particularly sharp “October surprise”, seems small.

Take those two points together, and Trump has a hard hill to climb: less than five weeks to find a significant number of extra votes when so few are up for grabs. Put another way, all Biden has to do is avoid huge mistakes. Like Rocky, his main task simply is “to go the distance”.

Here is where the New York Times stories may matter. They may or may not cost Trump votes, but I think we can agree that they won’t add to his support. And to the extent that they push other election stories aside, they reduce Trump’s opportunities to reach to the voters he needs.

My guess, and at this stage it can be nothing more, is that his avoidance of federal taxes won’t dent his support much, perhaps not all. Some of his supporters may be dismayed by his tax record, but not enough to switch to Biden. After all, Hillary Clinton pressed this very point four years ago — the evidence was more fragmentary,  but still clear-cut — and it did Trump no harm.

However, this week’s revelations tell us something that does have the potential to damage Trump. They show, comprehensively, what had not escaped the realms of allegation in 2016: that he is, in fact, a lousy businessman. Indeed, the very reason why he seldom pays federal taxes is that he has huge losses to set against his income.

Last time, part of Trump’s appeal to blue-collar voters in states such as Pennsylvania, Michigan and Wisconsin was that he was a successful wealth creator who could do for their jobs and prosperity what he had done with his own business empire.

That offer no longer looks quite so attractive.