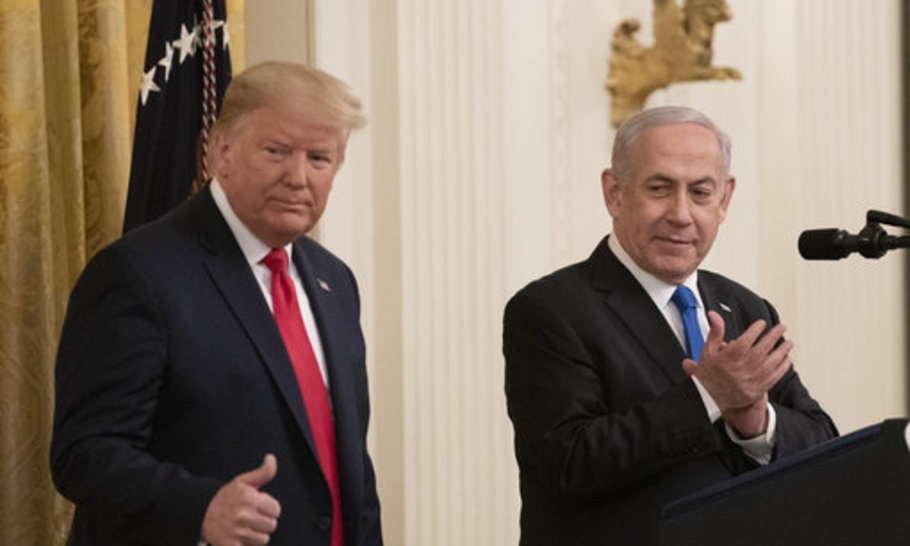 US President Donald Trump published an in-depth plan for peace between Israel and the Palestinians on Tuesday. Unexpectedly, it laid out details of a Palestinian State in the West Bank with a capital in East Jerusalem.

But, as is often the case with Trump, beneath the hyperbole lies a very different story. The 180-page document reads like the product of an AI algorithm that has absorbed every idea from 25 years of talks and reproduced them with the favourability dial set deep in Israel’s comfort zone.

Past US-led initiatives followed periods of intense negotiations between Israelis and Palestinians about painful concessions. But on this occasion, the Palestinians played no part.

This is the result of the Palestinian Authority’s decision to sever diplomatic relations with the US after Trump said in December 2017 he would move the US’s Israel embassy into Jerusalem and recognise the city as Israel’s capital. That decision — as well as cutting US funding for the United Nations Relief and Works Agency for Palestine Refugees in the Near East (UNWRA) and the announcement that Israeli West Bank settlements were not illegal — put the Palestinian leadership in an impossible position. They have completely rejected the plan, but might they have achieved a better outcome if they’d stayed in contact with Trump’s team?

The US offer to create a Palestinian State is dependent on the Palestinian Authority recognising Israel as a Jewish state, upholding human rights, fighting corruption and tackling incitement to violence. It also insists on ceasing the deeply controversial payments made to Palestinians convicted of terrorist offences and to the families of those killed while carrying out attacks on Israelis. The offer is also conditional on Hamas and Islamic Jihad in Gaza agreeing to disarm.

The Trump plan provides for a Palestinian State in more than 70 per cent of the West Bank, bolstered by Israel ceding chunks of land near the Egyptian border. But it says all Israeli settlements can stay where they are, and the small number in areas under Palestinian control will be classed as enclave communities, protected by the Israeli army. The Jordan Valley, on the eastern side of the West Bank, is slated to become a permanent part of Israel and Jerusalem would remain united under Israeli sovereignty.

There would be a Palestinian capital some distance from the old city and the Arab neighbourhoods of East Jerusalem. While the plan recognises the plight of Jewish refugees who fled Arab states for Israel, provision for Palestinian refugees are scant. It proposes merely to endeavour to set up a compensation fund and suggests they can move to the Palestinian State if they wish.

Israeli Prime Minister Benjamin Netanyahu, facing corruption charges back at home, was beaming at the White House and heaped praise on Trump. However, he hasn’t got everything his own way. The US proposal prohibits the expansion of Israeli settlements and requires Israel to withdraw from significant territory in the West Bank. Taken together with the creation of a Palestinian state, this could be a bitter pill for the Israeli right to swallow if the plan is ever implemented.

Netanyahu ignored those tricky issues and claimed he now has a green light to apply Israeli sovereignty to Israeli settlements and the Jordan Valley. None of the US team has suggested otherwise and here lies the real issue. Netanyahu is gambling that his sovereignty promise will win over more right-wing voters and hand him victory in the March 2 election, Israel’s third in a year. But he made that promise before the last election and his Likud party lost votes.

Netanyahu’s acceptance of the plan could rupture his alliance with right-wing parties whose support he desperately needs. His sovereignty push will raise tensions with Hamas, the Palestinian Authority and Jordan. That could trigger violence and rocket fire before the election.

The publication of the US plan was a deeply political event intended to distract. Trump can claim he offered the Palestinians a state and in the presidential campaign say he published the most pro-Israel plan ever. Both those things are true. Netanyahu deftly changed the subject away from his corruption charges, now officially filed in court, but he has placed Israel’s uneasy status quo in the West Bank front and centre of the election campaign. If Trump’s plan gives Israelis the chance to control all Israeli settlements forever, the March 2 election forces them to decide if that’s what they really want after all.