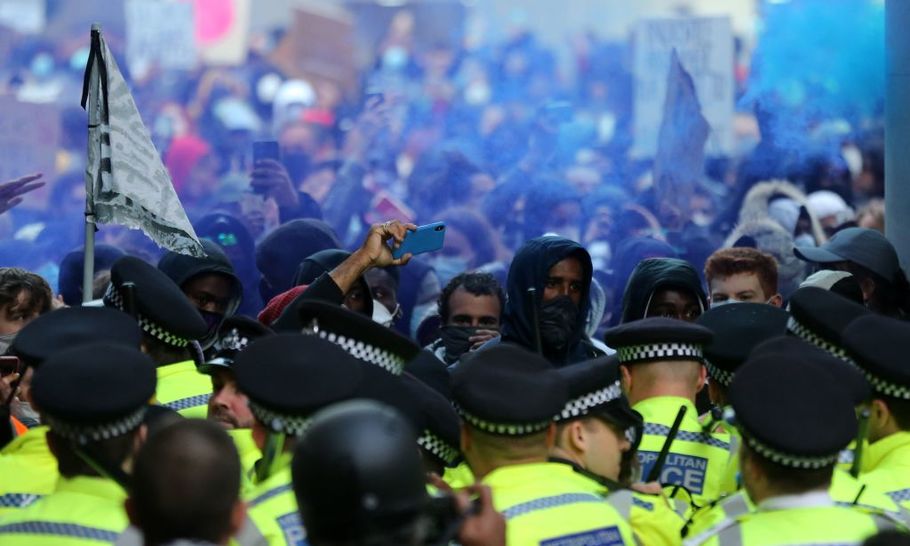 In our pandemic-crazed, dogmatic and dangerous world, there are innumerable reasons why you might become unreasonable. Your blood might boil over, your temper might fray. Dinner parties are ruined. Friendships are ruined by boozed-up bust-ups over Brexit, borders or Black Lives Matter.

Brits argue loudly, aggressively, and far too often, to the point where some people seem to mistake rage for strength. The more cautious arguer becomes drowned out. Our carousing fight-drunk media seeks to take online arguments and make them into full-bodied nationwide fracases. Everyone is shouting, no one is talking, and all the while the poles in our so-called “culture war” drift farther apart.

The image of Britain relayed back to us from the press shows a nation split into warring factions. There are the obdurate Marxist “cancel culture” vigilantes of the left. Then we have the foot soldiers of the far-right, who rally to guard the altars of Britain’s glory and empire. Third, there are the armchair social pundits who dislike ideologues and partisans. The used to be known as “moderates”.

The newspapers tell us that our cultural divisions run along entirely predictable, political fault lines. They tell us that age, education, and class mould our responses to great social questions. But, are they right? And if so, is there any hope for a Britain at war with itself?

Britain is a divided nation. It is true that if you were born before 1970, there’s a good chance you are pleased with Brexit. In the 2016 referendum, 64 per cent of people over the age of 65 voted Leave, in contrast to the 29 per cent of those under 25. In the 2017 General Election, only 21 per cent of those under 25 voted for the Conservative party, whilst a whopping 69 per cent of those over 70 voted Tory. If you were born before 1970, you are likely to have experienced generous public spending in your early life along with free university tuition. You may own more than one property. And you may have, until the pandemic, enjoyed watching your property portfolio and pensions mature steadily.

Of course, not “baby-boomers” have become rich. But the average experience of the millennial cohort is undoubtedly worse: growing up under the shadow of austerity (the longest period of wage stagnation since the industrial revolution), grudgingly paying £9,000 per year for a university degree that holds little promise of a career, feeling helpless in the face of the ebb and flow of an unregulated rental market, with all its cartels and barons, not owning a home, or in fact, anything that comes close to resembling a home. On paper then, it’s a decisively imbalanced socioeconomic arrangement.

But the intergenerational inequality cannot explain the cultural divide. In fact, on the most salient issue of modern times, the Black Lives Matter movement, there is a convergence of opinion across age groups. According to YouGov, 76 per cent of those aged 18-24 in the UK strongly support the Black Lives Matter Movement, while 66 per cent of those over 65 in the UK also strongly back the movement. Both young and old support the removal of Edward Colston’s statue. Both young and old also agree that Britain still has a problem with systemic racism.

Britain’s class system has been mutating since the early 1990s. Under New Labour, access to further education boomed, spurring on a new wave of social mobility. Now, 30 years later, this mobility appears to have undone the traditional theory of class-based political partisanship: that of the working class, with its low-income unskilled jobs universally supportive of any Labour movement; the upper class with its solipsistic arrogance habitually voting Conservative; and everyone else in the middle.

After generations of upward and downward mobility, better jobs and greater access to education for households, the once-unshakable concept of class loyalty is redundant. In modern Britain, we can no longer determine ideology based on class alone. In the 2019 general election, the electorate voted for the Conservatives instead of Labour across all social grades. The collapse of Labour’s “red wall”, showed that parties can no longer rely on class allegiance. Class is not why our cultural factions are at war.

For George Bernard Shaw, his thoughts on education were clear: “a fool’s brain digests philosophy into folly, science into superstition, art into pedantry. Hence education.” We can already see how, in modern Britain, a lack of education affects our daily lives. In the 2016 book Loud and Proud: Passion and Politics in the English Defence League, Hilary Pilkington estimates that only 6 per cent of EDL members had completed a form of higher education, while 20 per cent of members had never finished secondary school. In the 2016 referendum, 70 per cent of voters whose educational attainment was GCSE or lower, voted Leave. Out of the 30 areas of the UK with the lowest level of gradates, 28 of them voted Leave. In the 2019 general election, 58 per cent of those without a University degree backed the Conservatives.

But while education liberalises society, creating a more rational, empathetic populace, it cannot guarantee prosperity or harmony. What instead, is equally as important for our future collective togetherness, is an emphasis on the informal side to education, especially in giving people the spirit of enquiry — the ability to learn for its own sake, and to educate yourself. Gaining the ability to listen to and empathise with others; learning the ability to debate and discuss without losing one’s temper; learning that you simply cannot know everything; learning that everyone has an opinion, and in our culture, we all have a right to speak it.

Sadly this lack of self-taught discipline is found on both the left and right. On the right we have all seen how a lack of education, both personal and formal, has given birth to the “All Lives Matter” movement. We have seen how, on London’s streets, foot-soldiers of the far right (lacking in both formal and informal education) employ thuggery, brute force, and barbarism in an vain attempt to beat back the tides of cultural change they simply don’t understand.

On the left we have seen a lack of consideration and humility — skills that cannot be learned in the classroom — which have spurred on the “cancel culture” movement, which seeks to eradicate elements of society and history that do not fit the left’s supposedly “woke” vision of society. While the left may be more liberal, it has failed, time and again, to beat the Conservatives. It has failed to listen to Bernard Shaw and to “adapt itself to world”. It has not re-educated or reformed itself. The country has changed and left it behind.

The press is certainly right about one thing — Britain is at war. Our divided society continues to battle over our past, present and future. In Modern Britain, our cultural factions are not divided by age, or class, or university degrees. Instead, social divisions exists because we have forgotten how to listen, how to understand, how to compromise. Both factions, the cancel culture clique of the left, and the bully boys of the far-right, are guilty of this transgression.

It is time for something else to emerge — for Britain’s moderates to step out from under their suburban rocks, and help mediate between our warring clans. Perhaps then, with the help of moderates, we can again re-educate ourselves, learning once more that compromise in essence, is not a failure. It is a victory.