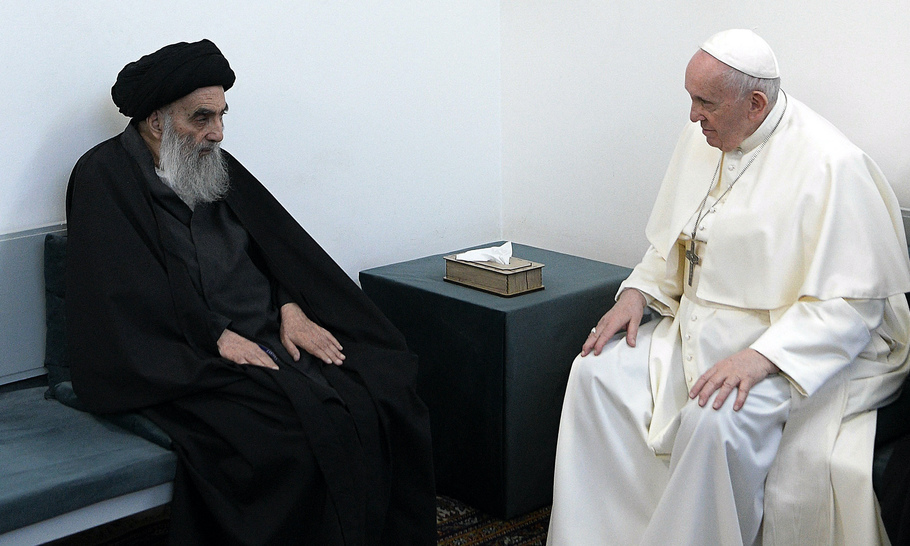 Whether or not you have read Professor Ian Linden’s excellent piece about the Pope’s visit to Iraq in TheArticle of 24 February, allow me to follow up with some personal anecdotes to emphasise the extraordinary significance and potential impact of his visit to this historical arc of civilisation.

On one of my early visits to Baghdad after 2010, I recall sitting with the brave Canon Andrew White and some members of his congregation at St George’s there, where the agony of Christian flight from Iraq was made stark. A mother told us that her son had arrived at work that morning to find a knife stuck into his desk with a message attached. It said simply “Leave”. “What are we to do?” she asked. “My family has lived here for generations, this is our home, but…he is my son.” And she broke down in tears. Behind the grim statistics of the dramatic flight of hundreds of thousands of Christians who have been leaving Iraq since 2003, lie countless individual stories like this.

Around the same time, I was sitting with an Iraqi community leader who asked me about my programme. I mentioned the Departments and Government representatives I was seeing. He said: “The mistake all you Westerners make is to assume that in meeting a government minister you are seeing someone who can get things done, as in your system! A government broadcast will interest a few thousand citizens at most. If a religious cleric speaks on television and tells people what to do, millions of people will obey him.” It was a gentle reminder that the secular West neglects the influence of religion on the day to day lives of people in the Middle East at its peril.

Pope Francis’s visit has been painstakingly built on understanding the truth behind these two stories. In January 2019 I met the Catholic Archbishop Warda in Erbil, in the Kurdish region of the north. We talked over the work the UK Government was sponsoring to assist many minority communities which had been driven out by Daesh, and needed solid support and reassurance to return. But we also discussed the possibility of a visit by the Pope upon which the Vatican was already working.

Time spent on the Nineveh Plain, or in Mosul, where the catastrophic destruction of the Old City and its treasures stand mute testament to the savagery of fighting, leaves a believer of any faith who has a welcome acceptance of others built into their identity, in despair and sorrow. The damage done by those who have used a corruption of their faith to turn others to violence has devastated huge areas of the Middle East and North Africa. Conflict is rarely caused by faith. Conflict is usually caused by men and their quest for money and power, in which faith and/or identity has been a useful tool to individual ambitions.

Challenging this is at the heart, it seems to me, of the Pope’s mission. Crucially, his meeting with the Grand Ayatollah Ali al-Sistani, the renowned and revered clerical leader of Iraq’s Shia majority, recognises the persuasive power of a man whose intervention against Daesh some years ago helped turn the military tide against them. The Grand Ayatollah’s words after his meeting with the Pontiff, affirming “his concern that Christian citizens should live like all Iraqis in peace and security, and with their full constitutional rights”, will have great resonance, not only for Christian citizens but “all Iraqis”. For it is Muslim Iraqis, Shia and Sunni, who have borne the brunt of casualties that their extremists have inflicted upon each other for too long.

That there are those in the region itself who are seeking to assert the connection between the Abrahamic faiths of Islam, Judaism and Christianity is also of huge current significance. One of the false narratives against Christianity has been that it is an exclusively Western faith, denying its Middle Eastern roots. Pope Francis is physically seeking out these roots during his time at Ur, the home of Abraham. He wants to ensure that there is a place for Christians in Iraq and the Middle East, so that the mother I spoke to need no longer tearfully urge her sons to seek shelter away from home. But the Pope understands that this security will come not from strictures from foreign governments, but from the hearts and minds of people who wish to live with all their neighbours, free to follow their own faith, and their own version of it. When they see the pictures of the Pope and the Grand Ayatollah sitting down together in peace, that mutual acceptance is just what may result.

In all this, spare more than a thought for Iraq’s President, Barham Salih, whom I have had the honour to know for more than a decade. He has devoted his life to public service for all Iraq — a brave calling. During his time as President he has worked to erase what I have heard him call “the indignities of forty years” inflicted on the Iraqi people by Saddam Hussein and the wars that followed his fall. His work has made possible this visit, which encapsulates his own longing for reconciliation. He, the Iraqi people and those of all faiths in the region, deserve the fruits of peace which will hopefully follow.