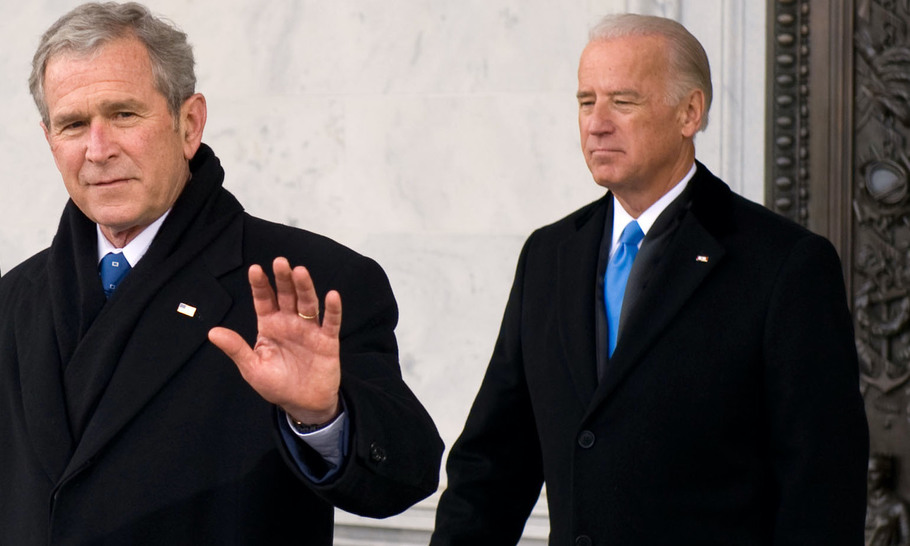 In what might prove to be a defining act of his Presidency, Joe Biden has accepted full responsibility for the US withdrawal from Afghanistan. And, it seems, just about everyone agrees he should. From radical feminists to the British Defence Secretary, there is unanimity that it was lost on Joe’s watch. Howls of feminist outrage characterise the decision as unconscionable, as it betrays 20 years of female emancipation, while Ben Wallace has made clear that Britain is powerless to act alone and the responsibility lies with the President. At one level, this is self-evidently true: Joe Biden has made the formal decision to withdraw residual American forces from Afghanistan. But the country was lost in the summer of 2002, not 2021. What we are witnessing now is no more than the final, largely pre-destined act of an attenuated tragedy.

To better understand this, we need to rewind to the events that immediately followed 9/11. On the day of the attacks America possessed an established military/political doctrine jointly authored by the former Secretary of State, Colin Powell, and the former Defense Secretary, Caspar Weinberger. The doctrine made clear that US forces would only be deployed in overwhelming strength, in pursuit of clear objectives and with a clear route to exit. In this it showed the legacy of messy engagements in Lebanon and Somalia and the long shadow of Vietnam. It was a sound, intellectually coherent approach — and completely inadequate to meet the unprecedented requirements of 9/11.

That natural iconoclast, the late Donald Rumsfeld, immediately abandoned its every precept in favour of a campaign with the speed and agility to match the operational conditions. The solution comprised huge volumes of indirect fire from invulnerable American aircraft, ships and submarines; CIA agents playing a 21st-century version of The Great Game; a ready-made infantry in the shape of the Northern Alliance; and an urbane and – at least then – compliant political leader in waiting in Hamid Karzai. In a seminal example of asymmetric engagement, this improvised force completely shattered the Taliban and drove its remnants into Pakistan or back to their villages.

At this point, America completely dominated the strategic situation in and around Afghanistan. The Taliban had ceased to exist as a coherent entity. Pakistan, having been bluntly asked if it was “with or against America”, was proving an amenable partner, as the capture of Khalid Sheik Mohammed and the purging of the ISI — the state intelligence agency — showed. Within Afghanistan, the sense of a better future was palpable. In the words of Jason Burke, Guardian correspondent and close observer of Afghan affairs: “everywhere one travelled…one found the expectation of a new era of security, stability and prosperity was dawning”. The scene was set for America to maintain the momentum of its success, install and bankroll a Karzai-led government, hand over aid, development and security responsibility to the United Nations et al, walk away and accept the laurels of victory. Had it done so, history might have been different and Joe Biden would now be off the hook. In the event, it chose another course, shaped by one decision of localised, tactical consequence and a second of epochal, strategic consequence.

It is easy to forget now that the American mood was, above all, vengeful. Elements of the US forces in 2002 began in some ways to resemble Sir George Pollock’s Army of Retribution that invaded Afghanistan after the catastrophic British retreat from Kabul during the First Anglo-Afghan War in 1842, and took its revenge. For US Special Forces, Afghanistan was a place to kill bad guys rather than a place to build a tribute to liberal democratic principles.

Consequently, US and, increasingly, Nato forces were conducting a campaign with a split aim: the larger part of it was international, about nation-building and the soft skills that create capacity and develop civil society; the subtext was a US national counter-terrorist operation and the hard skills that tracked and engaged America’s enemies, not always with the greatest discrimination. The two elements coexisted uneasily, though the tactical design could have been fixed had anyone been paying sufficient attention. But they weren’t and the epochal decision to abandon unfinished business in Afghanistan and follow the siren call of Iraq firmed up around this time. We need not be detained by subsequent events in Iraq, but the fact that it provoked a canon of commentary in which Thomas Ricks’s Fiasco is prominent tells all we need to know about a failure of truly historic proportions.

As a result, the West managed to contrive in Afghanistan the worst of all possible worlds: to stay in a tactically flawed, now subsidiary campaign, without the appetite or resource to make a real difference. It takes an effort of imagination to conjure the sense of incredulity that must have attended this passage of events in the inner councils of either the Taliban leadership or the Pakistani government. For the Taliban, it was evidence that the West could not – and never would — match the strategic stamina that was their strongest suit. For Pakistan, it meant a reappraisal of their strategic assumptions in a rough neighbourhood and a return to the policy of hedging its bets against a range of outcomes in Afghanistan. When the West returned to Afghanistan with real purpose in 2006 it lacked the moral and tactical clarity of the original invasion and, fatally, carried the taint of Iraq. While the Western military presence in Afghanistan might endure for another 15 years it would never regain the tactical, strategic, political and moral ascendency it briefly enjoyed in the summer of 2002.

Counter-factual history is something of an academic indulgence, but let’s indulge ourselves. Had America declared victory against terrorism and quit Afghanistan in 2002 the West might never have spent its power on unwinnable wars, it might have kept a far more wary eye on the rise of China and the strategic terms of engagement of the early 21st century might have been different. Indeed, America itself might be a less rancorous place. The eternally fissiparous Afghans might have made a mess of their new-found freedoms, but it would have been their mess and with much less scope for the bitter recriminations now raining down on the US President. In context, this might be seen as America’s Suez moment where the limitations of its power are revealed to both the watching world and to history.

When Sandy Gall observes: “Why did it all go wrong in Afghanistan? It can be summed up in one word: Iraq,” he identifies the proximate cause but behind that lies the hubris, delusion and incompetence that defined what passed for statecraft in the Bush administration, aided and abetted by the Blair government. The Wars of 9/11 turn on the events of 2002. The fatal mistakes made then set Western policy in Afghanistan on an ineluctable path to failure and the denouement we are living through now. The luckless Joe Biden is not the author of that failure; he just happens to be the fall-guy left standing as the music stops.