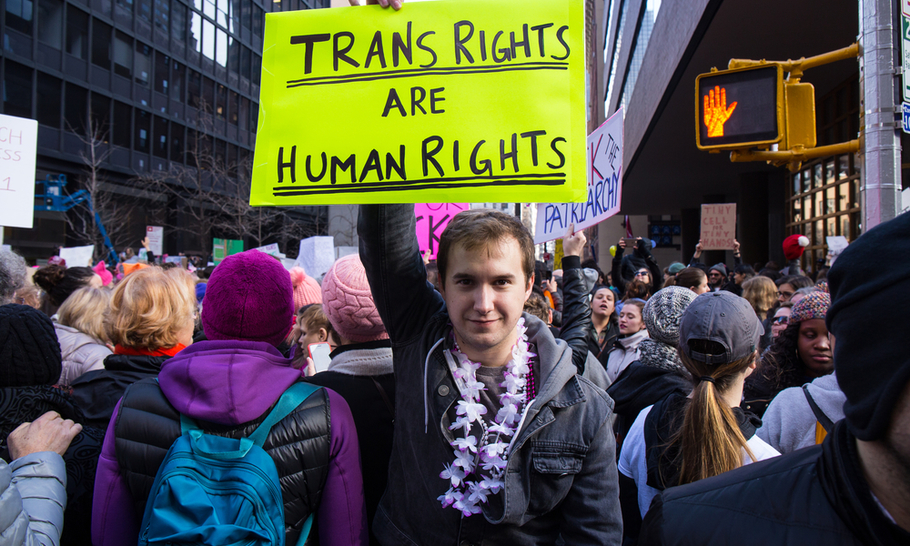 There were a small number of humourous responses: what, in LGBT history month, had happened to the L, the G, and the B? Perhaps the rights of these groups are secure and can be banked? Going forward, will February be Trans history month?

February is the month when the trans debate has reached its logical conclusion. Sadiq Khan produced the above declaration, which brooks no compromise. Lisa Nandy spelled out its consequences. At a Labour leadership hustings, Nandy faced a question which explored the logical conclusions of “gender self-identification”. She was asked whether the child rapist, Christopher Worton, who raped a teenage girl five times, but has since self-identified as a woman, should not only have his crimes recorded as committed by a woman, but also be housed in a women’s prison. Nandy’s response was yes.

So there you have it. At least we know where we are. The logical conclusion of gender self-identification is that biological males will be able to self declare into the protected spaces of women and girls: prisons, refuges, hospital wards, changing rooms, and public toilets. The boundaries that are probably as ancient as we are human, will be pulled down. None of us claim that all men will take advantage. There will be some gender dysphoric males for whom this will represent liberation. There will be others who will take advantage. We know how that ends.

In the pages of Mumsnet, Facebook, and Twitter, women have come together to voice their bleak despair, their anger and their desire to fight back. But who will be our voice among the powerful and the political? And why is it almost always women who have stepped up most eagerly to seemingly abandon women’s rights and protections?

Among the Conservatives, Penny Mordaunt was Minister for Women and Equalities when she agreed to do a Mumsnet webchat last year. According to the Independent, “Questions that Mordaunt wouldn’t or couldn’t answer started with . . . what is a woman, can humans change sex, and in what circumstances is it necessary to distinguish between males and females?” Nevertheless, instead of acknowledging complexity, she could only declare that “trans women are women.”

As for the Liberal Democrats, it was Jo Swinson who most famously decided that declaring “trans women are women” should be central to the Lib Dem election campaign last year. But she wasn’t alone in that. During last year’s campaign, BBC Radio 4’s Nick Robinson asked Lib Dem candidate Luciana Berger: “Is it the Liberal Democrats’ view that if I now declare that I identify as a woman you want the law to treat me as a woman?” Berger: “Yes.”

Robinson grilled her on the competing rights of women and those men who wish to identify as women. Berger answered, “I don’t think they are in competition… There shouldn’t be a competition.” It was the same for Lib Dem candidate, Sarah Woollaston, who said “I don’t think it threatens other women if trans people can self-identify.”

When the Lib Dems crashed and burned at the last election, should that have been a warning? No — Labour women picked up the gauntlet. Last week, the Labour Campaign for Trans Rights, produced a pledge statement, which we might have expected to articulate one extreme of a complicated debate. The pledges included:

In case anyone misinterpreted these as a starting position for a respectful debate, the pledges made clear there was to be no debate. They included:

Who rushed to sign up? Labour women of course. Within hours, Angela Rayner, Dawn Butler, Dr Rosena Allin-Khan, all vying to be deputy leader of the Labour Party, had signed up to the pledge. Leadership candidates, Rebecca Long-Bailey, Lisa Nandy and Emily Thornberry followed suit. Jess Phillips, before she was eliminated, had already clarified her views on Mumsnet, declaring that “trans women are women”.

As of Friday, the only men in the Labour leadership competition, Keir Starmer, Richard Burgon, Ian Murray, had not signed.

Just what exactly is going on? Some women have suggested that it’s a misplaced maternal instinct on the part of these senior women in politics. They can’t find it in their hearts to exclude anyone. They don’t want conflict. Luciana Berger said “there shouldn’t be a competition . . .”  They want to be nice — to be seen to be kind.

So I want to ask a different question. Where are the men? At least Sadiq Khan has laid his cards on the table. The debate can begin. Where are you on this, London mayoral candidate, Shaun Bailey? Where are you Boris Johnson, Matt Hancock, Gavin Williamson?  Where are you, practically every single other man in the House of Commons?

Have any of you lot got the balls to come out and defend women’s rights? It is time for you to speak up. Oh Brother, Where art Thou?