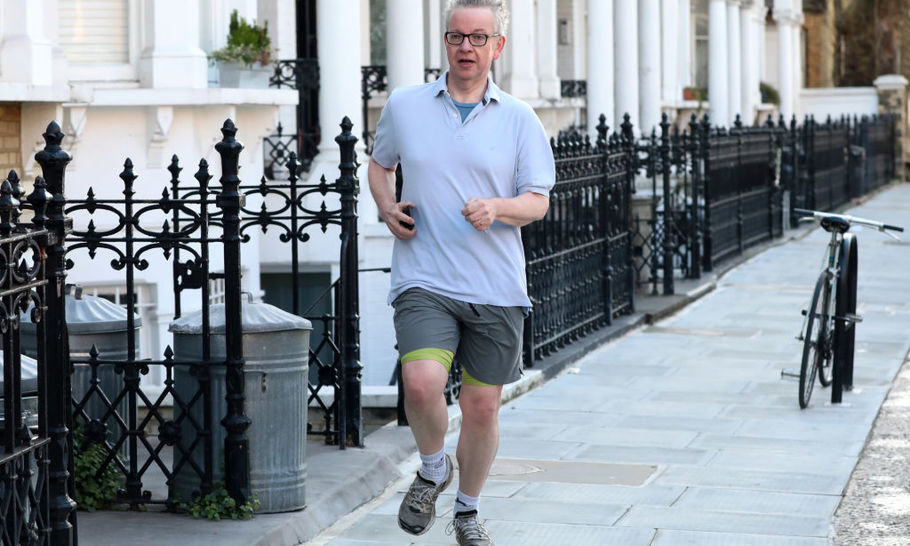 Why do we keep seeing politicians in their running gear? Boris, Gove, Hunt and Hancock aren’t just in the running for the Tory leadership – they seem to be actively running for office. So too is their opposition number, Jeremy Corbyn, who is reportedly ‘preparing for the demands of office with regular 15k runs’.

They’re not alone. Running seems to be the favourite hobby of the political class. Forget Theresa May’s walking holidays – Tony Blair, Gordon Brown and David Cameron all went jogging when they were in Number 10. And whereas competing in the London Marathon used to be the preserve of hardcore runners like Matthew Parris (as an MP, Parris completed it in 2 hours and 32 minutes), a record number of MPs ran the Marathon in 2018.

It hasn’t always been this way. In 2000, The Independent’s then-Sports writer, Brian Viner, wrote an op-ed under the headline ‘There’s a good reason why our politicians don’t jog’: jogging is ‘an embarrassing and thoroughly preposterous activity’. Looking at Michael Gove in his running gear, it’s hard to disagree.

And yet, though the long-distance runner may be a new breed of politician in the UK, in other countries those running for office have oft run outside it too. Jimmy Carter, the Bushes and Bill Clinton were all jogging Presidents of the United States. According to his office, Justin Trudeau runs between 2 and 6 times a week, and many a photograph of him doing so have gone viral. He has even mixed running with politics, going for jogs with the Mexican President and the Irish Taoiseach. Then there was Nicolas Sarkozy, or ‘Speedy Sarko’, who took his running so seriously that he once collapsed on the streets of Paris.

True, every politician needs a hobby. Roman emperors went to the gym, medieval kings went hunting and American presidents play golf. Hobbies requiring physical exercise, such as running, give the powerful an outlet from the stresses of politics. Having completed the London Marathon in 2003, Alastair Campbell now runs regularly as a way of dealing with his depression. David Cameron remarked that he enjoyed the anonymity that running in London, and the Secretary of State for Wales, Alun Cairns, has stressed the benefits of running for MPs’ mental health. As he put it: ‘I can tell you there’s no better stress reliever after a tense meeting. I sort all my problems out while I’m running’.

But it also seems that there is something about running, in particular, that attracts the political animal. After all, running requires focus, stamina and self-reliance – qualities that can be found in any successful politician. It was Chairman Mao who said that ‘long-distance running is particularly good training in perseverance’. Upon Richard Nixon’s election as president – after failing to be elected both president and governor – the New York Times called him ‘the Republican party’s most endurable long-distance runner’. The dedication to fitness of ‘karate kid’ Dominic Raab – who was once interviewed with a biography of Nixon carefully positioned in the background – inspired this remark from David Davis: ‘It did figure in my decision to employ him…being a top-class athlete is not just about fitness, but discipline, the ability to get out and run or train in the rain day after day with no immediate reward…It indicates a very determined character, able to summon all their resources and focus on an end.’

For those currently trying to summit the greasy pole of the Conservative Party, being interviewed in their running gear doesn’t seem such a bad idea then. After all, they could just use a treadmill and avoid the hassle. But the opportunity to have their hard yards documented and the sweat on their brow captured is probably just too good to miss. It’s no different from Putin – the Kremlin release pictures of their shirtless strongman hunting and shooting, and the public infer that he’s a ‘strongman’ in politics too. Likewise, it was Team Raab who made public the picture of him as an Oxford boxing blue.

Of course, a politician who runs for a charitable cause or personal health is no bad thing. But we’d be naïve to forget the fact that they’re also running for office. David Cameron may have prized running for its anonymity, but a jog around London is an opportunity for the Tory leadership contenders to market themselves in a way that they can’t in a suit and tie.

Chairman Mao would be proud.