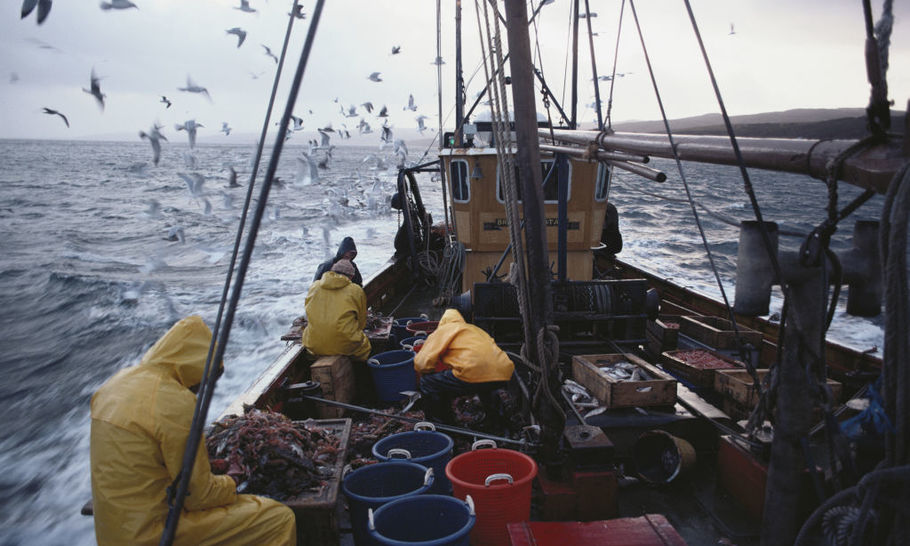 Of all the rows over Brexit, the one on fishing is the most fishy. There can be no doubt that it was Edward Heath who betrayed the fishing communities of Britain, when he negotiated entry into European Economic Community 50 years ago without any protection for the rights to fish in British waters. Now it seems that fishing access may be the obstacle to finding a compromise deal with the EU.

The paradox is that, for centuries, British fishermen have coexisted with their comrades from the western coastal communities of the continent without much more than the occasional flare-up over the scallops off the Normandy coast.

We love strong, white, firm-fleshed fish. Most Brits looks with horror at the monstrous-looking but delicious boney fish that go into a bouillabaisse. Most of the so-called “black stuff” — squid or cuttlefish which exude ink — are dumped into steel containers and sent on to Spain and France as there is no market for them in Britain.

On average, a fish in the North Sea crosses five territorial waters frontiers every day. They don’t have passports or face quarantine. Britain made a fool of itself during the three cod wars it fought with Iceland between 1956 and 1976. British fishermen decided these were “traditional” waters and the Royal Navy was sent in to try and intimidate the Icelandic fishing boats. Other than geo-thermal energy, banking and airlines, the main Icelandic product is cod. They depended on hauling cod of out the northern waters close to Arctic Circle — we looked absurd trying to stop them.

Does a new fish war with France, the Netherlands, and Spain now loom? The problem arises partly from the 1982 UN Law of the Sea convention which extended territorial waters out to 200 km. Previously the seas British and French trawlers had shared for centuries did not have a national flag over them.

Edward Heath was regularly excoriated as a “traitor” for having sold out British fishing communities. Today, the total number of fishermen in the EU, including the UK, is 180,000. Thirty per cent of on-board fisherman in Britain are European, and nearly all the fish processing workers in ports are from poorer east European states.

But they have symbolic political weight far beyond their economic importance. The stellar Brexit reporter, Peter Foster, of the Financial Times, said that something representing 0.1 per cent of the UK economy cannot derail a deal. Wanna bet?

It is impossible to imagine President Macron being branded as France’s Edward Heath by selling out the fishing communities of France from Boulogne to St Jean de Luz. It would be a priceless electoral gift to Marine Le Pen, Xavier Bertrand, the no-nonsense centre-right regional chief in northern coastal France, and other opponents. The 2022 French presidential election is drawing near.

France and the rest of the EU can bring British fishing to a dead stop by simply refusing to allow fish landed in Britain to be exported to Europe. Around 60 per cent of all the catch landed in our coastal communities goes straight to the continent.

Of course Britain’s fishermen and women want to turn the clock back to what existed prior to the UK joining the EEC, but they also want to sell boats and licenses to Spanish fishing firms in order to retire comfortably. They also know that Britain’s fishing industry cannot exist without the EU citizens who do the smelly, dirty processing work that British workers have long refused.

Talking to Andrew Marr, Boris Johnson promised a radiant future for young Scottish people once he had brought back pre-1970 fishing waters. He contrasted this with the SNP government’s willingness to prostate itself before Brussels.

It is not clear that fishing in icy dangerous waters or spending all day gutting fish is that enticing for today’s British workers. But Johnson also needs to show lost Tory voters in Scotland’s few fishing ports that he is battling for them.

Some live and let fish compromise is necessary before Britain launches an unwinnable fish war with the continent. The Common Fisheries Policy (CFP) is no longer the racket it was when Britain joined the EEC in 1972. It is now mainly about conserving fish stocks which is as important to British fishing skippers as their continental comrades.

The British proposal for a three-year continuation of the existing status quo is a start. Lengthen that with a review clause and a guarantee that anything landed in the UK will have automatic tariff and quota free access to European markets and we might get somewhere.

But the prime minister needs to lower expectations, not inflate them. As with his unending bluster about “world-beating” measures to conquer Covid, his boasts about restoring full control over pre-1970 fishing waters need to be consigned to the deep.