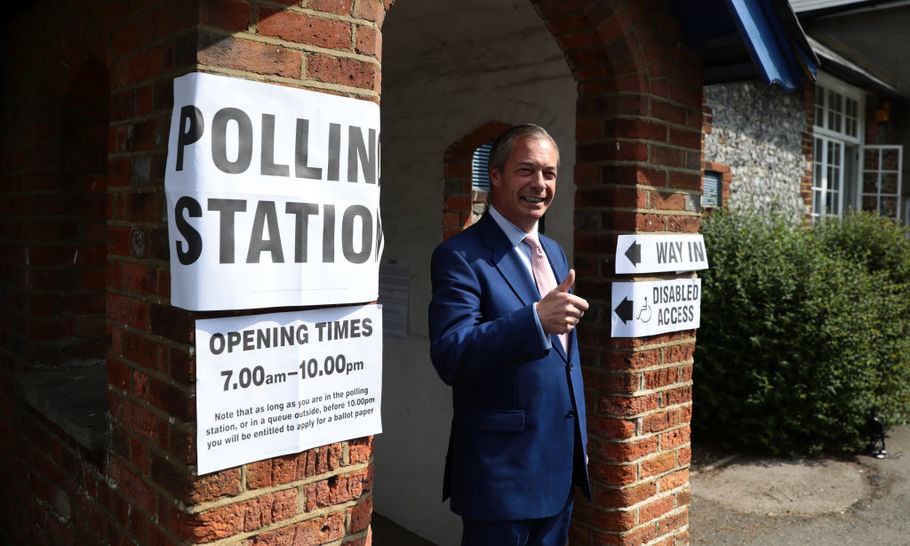 When the history of the Brexit-saga is written up, Nigel Farage, will loom large within it. He has devoted his life to securing Britain’s departure from the EU for almost three decades. If he has one eye on his legacy, then his decision yesterday not to field candidates in the 317 seats won by the Conservatives in 2017 is a sensible move.

Enoch Powell observed that “All political lives, unless they are cut off in midstream at a happy juncture, end in failure”. Farage has, to date, bucked the trend. If he is to avoid snatching defeat from the jaws of victory, he should go further and pull back from contesting Tory marginals where the electorate voted Brexit. Failure to do so could split the leave vote and allow Labour or the Liberals in.

That potential outcome was seen in both the Peterborough and Brecon and Radnorshire by-elections where the decision by the Brexit Party to field candidates resulted in defeat for the Conservatives. There is also historical precedent. In 1983, the decision by the SDP to contest seats fractured the vote on the left enabling the Conservatives to win seats in the North and the Midlands that were key to Margaret Thatcher’s 144-seat majority. If a Labour government is elected, the choice in the inevitable second referendum that would follow, would be between a sanitised Brexit agreement and remaining within the EU.

In April last year, I spent a couple of days shadowing Farage in Strasbourg. Even though the country had voted to leave the EU in 2016, he smelt rat and was unequivocal. “If they drop the Brexit ball then I’ll be back but next time no more Mr Nice. It will be 1381, Watt Tyler mark II,” he said referring to the Peasants’ revolt against the imposition of a poll tax. He would go on to set up the Brexit Party, and within the space of six weeks take it from a political start up to top the poll in the European elections in May this year.

Unlike so many politicians who see elected office as a career to climb the greasy pole to ascend to the dizzy heights of ministerial office, that has never interested Farage. He left his commodities trading business to focus on his goal of securing the UK’s departure from the EU. “I don’t think I have ever met a single human being who has dedicated themselves to a cause the way I did to this,” he said. Few would argue.

For him the issue was one of “sovereignty and nationality”. He also felt from the very beginning, that whilst he was taking a position in direct opposition to that of the political establishment, his sentiments were in tune with majority opinion. This unstinting self-belief, combined with his trademark bloke in the pub-like charm, proved seductive to many.

David Goodhart has drawn the distinction between the “Anywheres” that dominate the political, corporate and media classes with their liberal, internationalist worldview and the “Somewheres” who are rooted in their locality and are more small “c” conservative in their views. Farage’s great strength, unlike so many politicians in the Westminster bubble, has been to instinctively connect with the “Somewheres” and give voice to their views. There is a parallel with the polemicist and political activist Tom Paine who played an instrumental role in two revolutions, the American and the French, and directly challenged the position of the ruling class.

Whilst supporters of Farage, including Arron Banks, have implored him to back down now, it is his ability to feel the pulse of his natural constituency of supporters that may have led him to change his mind. It may also be his instincts as a former City trader. Having won the referendum and then gone double or quits correctly predicting the election of Donald Trump, he does not want to be on the wrong side of this bet.

He must realise that the public are exhausted and that the fate of a “no deal” Brexit of the type he prefers was sealed when the ERG decided to back the Johnson plan. The success of the Brexit party in the European elections has resulted in the government pushing for a “harder” exit deal but if he is now to secure any Brexit at all, pragmatism rather than ideological purity is called for.

It is clear that Farage thrives in the cauldron of debate and has been highly effective at getting his message across to those he has sought to mobilise. He may well continue to have a contribution to make to public life as he is already doing with his broadcasting interests, but his time in active politics is drawing to a close. That is no bad thing. Even the rock star who has gone platinum must realise when it is time to work on the next album.