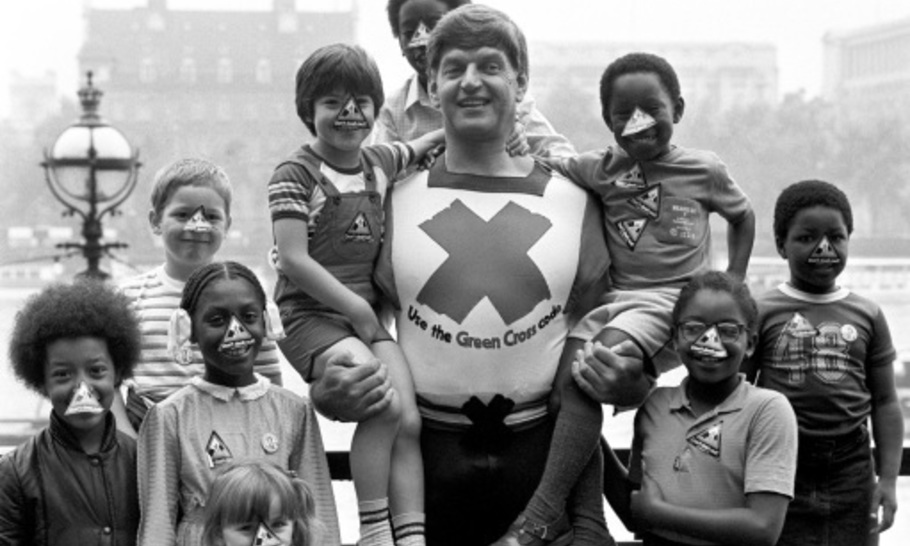 It was a sad moment for me, hearing on the radio over the weekend that my friend from yesteryear, Dave Prowse, had died. He was most famous for two things: playing Darth Vader in the first three Star Wars movies (the best ones, as all purists know), and being the Green Cross Code man in the 1970s and 1980s. The latter role earned him an MBE for raising awareness of road safety among the nation’s children. Perhaps fewer people were aware that he had also been, before all that, a British heavyweight weight-lifting champion in the 1960s…and that he had achieved that notable goal after being diagnosed with TB of the leg as a child, when he was forced to spend a year lying in hospital, withering away, and another three years in a calliper. It made him strong-minded and ambitious to succeed. He was quite a guy.

I first got to know him when I was a young aspiring actress in the early 1970s. He owned a gym in Borough, south London, back in those distant days when not everyone and their grandma had a gym membership, when going to a gym was something that only a few sorts of people did: mainly actors needing to keep in shape for their roles, and young body-builders. With his contacts in the film and TV world, his membership included quite a few actors, which made it an interesting place for me on my twice-weekly work-out sessions. He set me a routine and I suppose became a kind of trainer for me, although it was an informal arrangement. I should add that the gym was primarily for male members, but women were allowed to come once a week on “ladies’ night”, which sounds hopelessly quaint in the 21st century. But as we’d become pals, he let me come whenever I wished. I would make the long tube journey (Central and Northern lines) from Bayswater, where I was living in a flat with my parents and leading what I considered an overly sheltered life.

His brother Bob was there a lot; I believe he helped Dave run the gym. He was good-natured, laddish and a bit of a tease. I remember him saying he was glad to see the workouts were helping me to lose my “puppy fat” but that my “bandy legs” could use some work. Goodness, #MeToo activists would have him drummed out of town for less than that nowadays. But back then women could take a little harmless joshing without falling apart and rushing to the nearest therapist.

On a few occasions, as I was doing my floor exercises, using the rowing machine or standing on that weird contraption that ran a belt around your middle and jiggled your hips around, he’d saunter over and say he was just popping out for a coffee with so-and-so (some reasonably well-known actor), and ask if I wanted to come along. Naturally I always did. I met Paul Nicholas that way, who was appearing in something in the theatre at the time, and was a dishy young actor indeed. No doubt about it, being Dave’s gym pal was a lot of fun.

I remember him as a consummate gentleman. On one particular ladies’ night I rather overdid my exercise routine, and what with the intermittent chatting and flirting with the weight-lifting beefcakes, it got pretty late. He said I shouldn’t take the tube home and that he would give me a lift instead. So he drove me all the way from Borough north to Bayswater, before driving back home, far south to Croydon. It must have added an hour to his journey. But I think he felt paternalistic towards me, as I was barely out of my teens at the time and clearly an ingénue.

I roped a couple of Hungarian friends into joining the gym as well, both called Esther, referred to by Dave as Esther One and Esther Two. And then there was the memorable evening when he threw a big noisy party at the gym. I’d told him that the Hungarian national fencing team was in London for a tournament, and one of the fencers was a family friend, so could I bring him along? “Bring the whole team,” he replied. And I did. (It got a bit wild.) I met Dave’s wife that night — a very attractive brunette.

I carried on going to the gym until I got engaged at the inordinately young age of 21, when I became preoccupied with other things. If I say so myself, I was pretty damned fit at that point from all those workouts under Dave’s tutelage.

One incident with Dave still makes me laugh. It was the summer of 1974, shortly before my wedding, and my fiancé and I were strolling down Oxford Street on a shopping expedition. All of a sudden I was lifted high up in the air from behind, as if by a giant (which Dave almost was, at 6 feet 7 inches tall). He laughed, and after getting over my shock I giggled too.

But my fiancé wasn’t laughing. How dare some man grab his future wife from behind? He glowered up at Dave, all pugilistic-looking, and asked me: “Do you know this guy?” As if, had I not known him, there was anything he could do about it. Introductions followed and the men shook hands, although I’m not sure the fiancé was all that thrilled.

Two decades later I saw Dave again, when I interviewed him for a book I wrote called Dreams and Doorways, about the crucial turning points in the early lives of celebrated men and women. We met at the gym, which was still gong strong, and because it was so busy and noisy we conducted the interview in the privacy of the sauna. It wasn’t turned on at the time.

That was the last time I saw him. But some people remain with you forever, however many years roll by, and for me Dave Prowse was one of them.