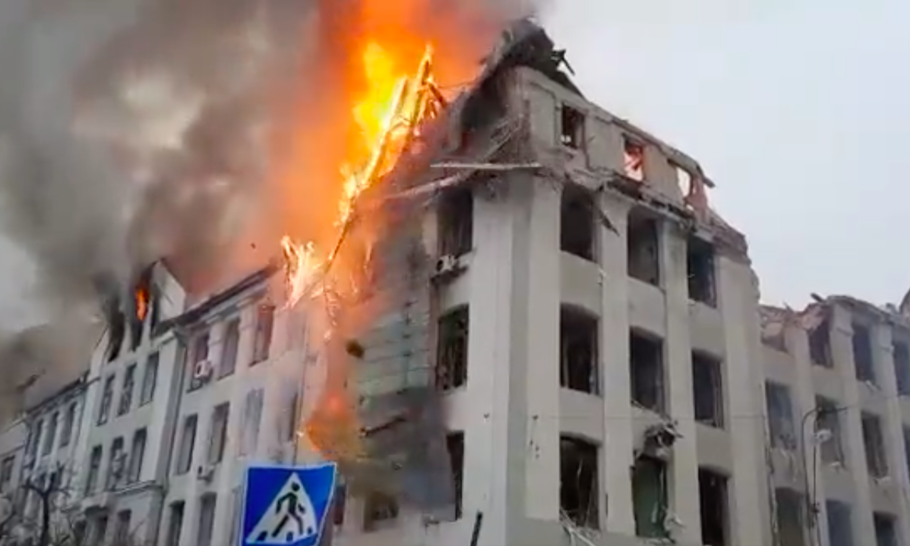 A week is a long time in politics, and an age in war. War is the mother of invention and the father of revolution. We are witnessing both in breakneck speed. Very painfully, we have been reminded of Leon Trotsky’s truism “You may not be interested in war, but war is interested in you.”

One week on we are about to enter Phase 2 of the ground war within Ukraine, with Russian main forces, artillery-heavy, replacing lighter reconnaissance and advance guard units. If they are given the order to attack as Russian forces did in Chechnya and Syria, then we will witness carnage in Europe — including war crimes and crimes against humanity — reminiscent of the Second World War. Putin’s ally, the Belarusian President Lukashenko, chillingly warns that to-date we have only seen conflict: “In a day or two there will be a war, and in three days there will be a meat grinder”.

How much worse could this get?
A diplomatic way out this coming week is possible but unlikely, as neither of the two key protagonists is prepared to concede their primary objectives. For Putin it is to reabsorb Ukraine into Russia. For Ukraine and its inspirational leader, it is to remain an independent and sovereign nation. Because things have gone badly so far for Putin he will revert, as both William Hague and Gideon Rachman agree, to the role of ruthless, brutally-hard KGB man. He will ratchet up the tempo and the bloodshed.

A week ago General Sir Richard Shirreff, former Deputy Supreme Allied Commander, Europe, was an outlier when he warned that we could soon be at war with Russia. Now he is no longer a lone voice. On both sides of the Atlantic this prospect, and how to avoid it, is getting significant attention. General Sir Richard Barrons now believes that NATO may be forced to get involved directly, for example, in enforcing a no-fly zone, more as a result of overwhelming public pressure than by politicians’ choice.

What will Putin do now?
Former Russian ministers and insiders are confirming that Putin has badly miscalculated both staunch Ukrainian resistance and the speed, cohesion, and weight of the western response. Russian military problems have been beamed across the world. Putin, the “old man in the bunker”, increasingly detached and paranoid, is incapable of pressing the “reset” button. He will press on harder, and seek to regain attention and control by constantly distracting and unbalancing us all. Megaphoning a change in nuclear alert state is one thing. The next stage could be to cause us to react elsewhere, for example in the Balkans, the Baltics or a former Soviet country now in NATO.

In the face of more setbacks and pressure, expect him to lash out. His old oligarch friend Mikhail Khodorkovsky recently gave an interview to the BBC, telling us to be in no doubt as to Putin’s resolve. After Ukraine he may wish to punish NATO, even seeking to dissolve it or to fight it. While it is reassuring to hear Khordorkovsky say that Putin is not fanatical like Hitler, and would not use strategic nuclear weapons, there are plenty of people now thinking various versions of the unthinkable. The use of tactical nuclear weapons in “escalate to de-escalate” mode is a tenet of the latest Russian military doctrine. While this is most unlikely in Ukraine, it should not be dismissed elsewhere in a worst case scenario.

The West’s response?
The West has finally awoken from its slumber, and is racing to make amends after years of denial, naivety, and soft living. Better late than never. In less than a week we have witnessed transatlantic determination and resolve not seen in over a generation. Invention and revolution abound: unprecedented sanctions and economic war, SPD and Greens-led Germany upending foreign and defence policy and committing to a €100 billion defence budget, the EU purchasing and sending weapons to Ukraine, Switzerland eschewing its neutrality and applying sanctions and going after Russian dirty money, Britain out front and working with Europe and very deftly playing to its strengths in the intelligence and information warfare spaces.

Whoever would have predicted that BP and Shell would sell their Russian assets and that the rouble would be worth one US cent? This crisis has barely started.

Likely next consequences?
We are not yet in full scale economic war with Russia, but we are heading there. It will be unconscionable to witness fellow Europeans being slaughtered with weapons funded in part from trading contracts with NATO and EU member states. We are surely now close to full-scale (preventative) intelligence war with Russia. We are certainly in the phoney war stage, if not beyond, in the (critical, very 21st century) information war space — one of our greatest strengths.

In the hard war space we are (rightly and deliberately) responding very carefully. We have not mobilised. We are going out of our way not to provoke (so we think, Putin might think otherwise). British reinforcements to Eastern Europe are fewer than we sent to Northern Ireland at the height of the troubles — but at sea, or in a deployed battle group, or air policing role providing the NATO trip wire, it will be feeling close to phoney war.

History tells us that pre-war tensions have a tendency to gain a momentum of their own. This appears to be the case now. We desperately need to de-escalate but neither President Xi, nor anyone else, looks able to deliver the “off-ramp”. Things will probably have to get worse before that happens.

So we must steel ourselves. Both Putin’s brutality and Zelensky’s courage and resolution will, I sense, fuel an unstoppable wave of support for brave Ukraine and its beleaguered people. Is this the 21st century, digital-age version of Britain in 1940? The public demands that Putin and Russia must not be allowed to succeed. At the time of writing, I doubt that NATO will enforce a No Fly Zone or intervene on humanitarian grounds. But the pressure for it to do so will mount. Member states have considered supplying warplanes to Ukraine.

Possible future consequences
At the centre of this crisis is an overlooked group — the Russian people. Increasingly better informed and emboldened by people power demonstrations beyond Russia, might we see Tsar Putin’s rule suddenly collapse? A palace coup cannot be discounted, but Putin has carefully assembled layers of security that makes that difficult. The leadership and succession dynamics are more akin to the Stalin than the Khrushchev, Brezhnev, or Gorbachev eras.

In the UK the defence budget will surely be increased to 3 per cent, possibly more, of GDP. I still pine for a national government and up-gunned cabinet under a new PM, but with Boris finding his inner Churchill, and playing to his charismatic strengths, we may have to settle for him. For now.

China may be the essential partner when the diplomacy moment comes. President Xi clearly decided to hedge his bets when it came to the United Nations security council resolution veto. At one level it helps China to have the United States doing an urgent pivot back to Europe, but at other levels China cannot afford to be too far from mainstream global opinion on Ukraine, nor too close to Putin, which risks fuelling the growing  “two evil empires” narrative. He will be watching the newly energised and multifaceted Western response to this crisis, as well as its economic and information warfare aspects very carefully.

India is pivotal too. Will it continue its dependence on Russian military equipment, or will Modi now push for change?

Finally, there is the question of how we got here. Churchill’s The Second World War: The Gathering Storm provides the theme: “How the English-speaking peoples, through their unwisdom, carelessness and good nature, allowed the wicked to rearm”. That hits the spot pretty well.