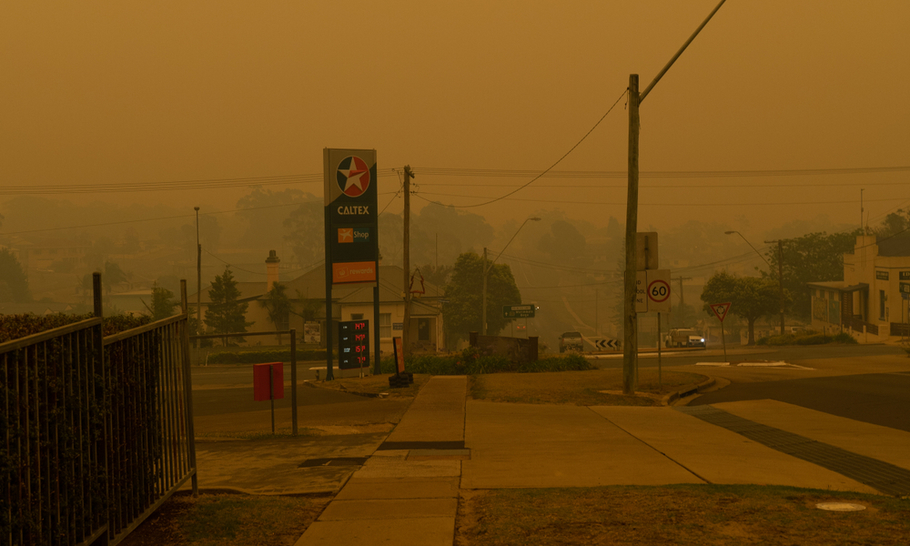 In Gisborne, it’s 7am and a smartphone on the kitchen table buzzes. Suzanne Reinwald, a 54-year-old librarian and mother of four, stops cooking breakfast and urgently reaches for it. The distinctive ringtone signals an update from the Country Fire Authority; a bushfire has ignited in nearby Sunbury. It’s the lowest of three warning levels: “Advice”, providing the location and size of the fire. The highest is “Emergency”. It says: “You are in imminent danger and need to take action now. You will be impacted.”

As smoke from the Sunbury fire drifts across the valley below there’s another buzz. This time on it’s an update on the extended family WhatsApp group. Aunts and uncles are being evacuated from Lakes Entrance, 400 kilometres away on Victoria’s east coast and not too far from Mallacoota where thousands have been stranded on beaches as bushfires turned their homes to ash. There is no shortage of offers from brothers, sisters and cousins; beds, food, money — “whatever you need as long as you need it”.

Australia is no stranger to bushfires. They’re a part of the landscape. Eucalyptus, like the ubiquitous gum tree, and the banksia, need fires to pop their seeds to regenerate. Forests rely on fires to cleanse the undergrowth and replenish, once, perhaps twice, in a generation. But the sheer scale of these fires is unprecedented, aggravated by growing populations attracted to a bush lifestyle, drought and climate change. And there’s what’s become known as the “dickhead factor” — arsonists. Authorities believe about 40 per cent of all fires are deliberately lit, another 40 per cent the result of human stupidity.

Together they have ignited the perfect firestorm.

“If you’re not directly affected by fire, it’s a fair bet your family and friends are,” Reinwald said as her mobile constantly updated.

Natural disasters hit communities hard and sometimes entire cities and regions, but rarely an entire continent. And the current disaster has caused deep divisions within Australian society. There are those who accept the science behind climate change and those who believe the “lucky country” can skip along its merry way, isolated from the problems that afflict the rest of the world when it suits them.

Among the latter is Prime Minister Scott Morrison, an evangelical Christian, whose decision to take his family to Hawaii for a Christmas holiday as Sydney choked under bushfire smoke, will rate among the great historical political blunders and was seen — even by his supporters — as uncaring.

Dubbed “Scotty from marketing” by The Betoota Advocate — the Australian equivalent of The Onion — Morrison has threatened to outlaw consumer boycotts of companies that ignore the dangers of climate change.

Scientists, however, have no doubt that heavy fluctuations in ocean temperatures leads to drought. The current dry spell was spawned by a weather phenomenon known as the Indian Ocean Dipole, when unusually cooler-than-average sea surface temperatures, across the eastern half of the ocean, are matched by warmer waters in its west.

This has also been blamed for causing drought in south-east Asia, where the Mekong River is at a record low six months before the monsoon arrives, and floods in East Africa. It’s a phenomenon that has been exacerbated by global warming and is now peaking at record extremes.

Such extremes once occurred on average every 17.3 years; scientists are forecasting its frequency will increase to once every 6.3 years over this century, fed by carbon emissions. That means longer droughts and more of them, and a much greater exposure to bushfires in Australia.

And then there’s the “dickhead factor”. Bushfires are often started by lightning strikes, downed power lines, sometimes by back-burning that’s gone wrong, accidents and carelessness. The idea that anyone could deliberately torch a tinder dry countryside is difficult to fathom.

More than 800 people are known to have died in Australian bushfires since records began in 1851, with the south-east state of Victoria bearing the brunt. But big bushfires were once rare.

In 1939, Victoria’s Black Friday bushfires left 71 people dead and a Royal Commission found “these fires were lit by the hand of man”.

Black Friday remained the benchmark for devastation until 1983, when drought, high temperatures and low humidity culminated in Ash Wednesday and 75 people lost their lives as 104 fires swept through South Australia and Victoria.

“It’s not known exactly how all these fires started, but some were caused by power lines clashing with each other and with trees. Some were deliberately lit,” said the Australian Academy of Science.

In 2009, the worst bushfires to strike Australia claimed 173 lives in what became known as Black Saturday. Some 400 fires ignited across Victoria — the first was suspected arson. Finding those responsible is a difficult task, but this time a conviction was obtained. Brendan Sokaluk was jailed for 17 years and nine months on 10 counts of arson that left 10 people dead. He remains behind bars and is known as “Victoria’s worst killer”.

Decades could pass between major bushfires, but since the 1990s they have become an almost annual event, alongside record high temperatures. The current firestorm is unique: never has so much of Australia been ablaze at the same time and it’s not even the height of summer.

More than 6.3 million hectares have so far been burnt, surpassing the previous record set in 1851. At least 24 people have died, arrests made — three teenage girls and a volunteer fireman among them — and police say another dozen people are also facing charges of arson with more under suspicion. In Gisborne, which is surrounded by bushland and the Macedon Ranges, that’s as hard to stomach as is the refusal by Australian leaders to deal with the impact of climate change. It’s even worse when 80-year-old relatives have no choice but to grab what they can and abandon their cherished homes.

“Since Black Saturday 10 years ago it’s just gotten worse and worse because you can feel the effects of climate change,” Reinwald said.

“It’s insidious; longer summers, hotter days and that dry crunch beneath your feet. Technology has helped enormously and we’re organised as best we can, you’d think the politicians could do the same.”

The worst is still to come.