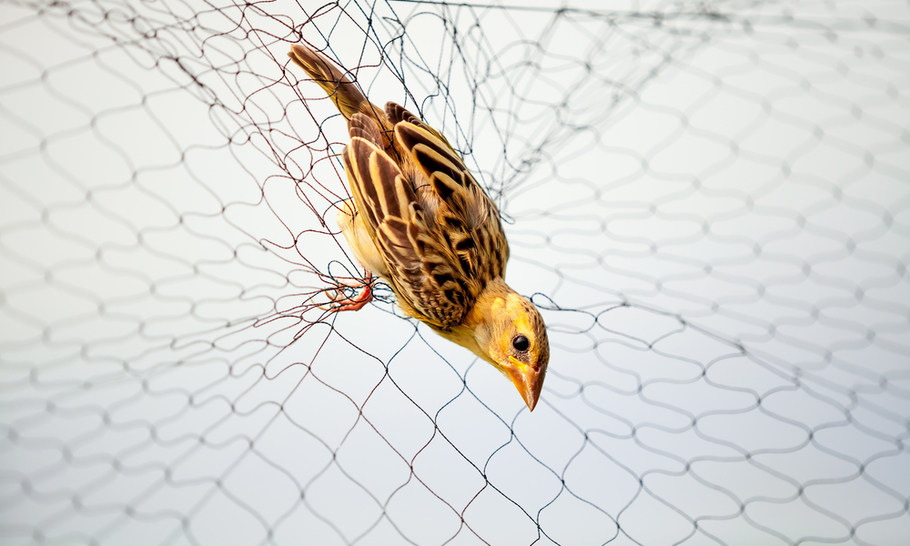 Scandalous behaviour during construction work has caused public outrage as birds are trapped by netting and rare orchids destroyed. A blind eye turned to illegal raptor persecution and Natural England’s general licence allowing all kinds of birds to be killed willy-nilly leaves us wondering what wildlife will be left. Rather than rely on the law to protect nature, it would seem we need to make our voices heard.

With the arrival of spring, developers have been using netting to prevent birds nesting in hedgerows and trees, a practice which is becoming increasingly common with the demand for new homes. The Wildlife and Countryside Act prevents the removal and damage of nests and eggs, so by netting ahead of development, and even planning approval in some cases, developers hope to avoid delays caused by the nesting season.

This unscrupulous behaviour is being exposed and challenged in public. Naturalist and TV presenter Chris Packham and BBC Radio 2 presenter Jeremy Vine condemned the use of netting in Winterton, Lincolnshire. Meanwhile, public outrage on social media and at construction sites across the UK has forced developers to reconsider their netting policy.

Social media has also boosted support for Margaret Moran’s parliamentary petition to make the netting of hedgerows a criminal offence, but the response from the Ministry of Housing, Communities and Local Government is rather less inspiring. They have written to developers to “remind them of their legal obligation to consider the impact of any project on local wildlife and, where necessary, to take precautionary action to protect their habitats”. But is a letter going to make a difference when legally they are in the clear with a Wildlife and Countryside Act that protects active nests but not the opportunity to nest?

In Norfolk, sand martins returning from Africa to their usual nest sites in the sandstone cliffs at Bacton recently found their burrows inaccessible. The North Norfolk District Council had covered a long stretch of the cliff face in netting to prevent nesting in preparation for a sandscaping project to tackle coastal erosion. Migratory birds face enough threats as it is and depend on favourable breeding sites for their long-term survival, yet the council ignored expert advice. The RSPB’s recommendation was to use geotextile, a fine mesh safe for birds, and to cover only those burrows at risk from the works as long as there were alternative burrows either side of the netting. The RSPB agreed with the contractor’s method to limit the netting to a maximum width of 50m and to use a bright colour.

So, why did the council use black netting with larger holes to cover the full height of the cliff face for a stretch of 1.3km? NNDC said they followed detailed environmental impact assessments approved by Natural England, yet they ignored the RSPB, a trustworthy research-based ‘voice for nature’. Fortunately, the RSPB won public support for the sand martins on social media and the council have partially removed the nets.

In another rash act by a local authority, over 17,000 rare bee and common orchids tended by local Kent Wildlife Trust volunteers for 15 years were razed to the ground at the Bluebell Hill Roadside Nature Reserve. Bees, butterflies and insects are already severely affected by chemical use and habitat degradation with a ripple effect on birds and small mammals. Dr Trevor Dines at Plantlife said Kent County Council instructed contractors to clear a drainage ditch ready for the expected increase in traffic to and from the port of Dover in the event of a No Deal Brexit. But neither the council nor the contractors paid heed to the precious wildflowers, so after grubbing up some trees the area was scraped clean. Highway safety is important, of course, but so too is preserving these small pockets of nature that provide habitat for small but significant insects, birds, reptiles and mammals.

Another scandal that incites widespread public reaction is the persecution of birds of prey on grouse moors in the UK and the low number of prosecutions thought to arise from vested interest protection. Birds of prey are targeted by gamekeepers under pressure to maximise red grouse numbers for driven grouse shooting. Hen harriers in particular have become victims because they happen to nest on the moorland and feed young grouse to their own chicks.

In his book Inglorious: Conflict in the Uplands, former RSPB Director of Conservation Dr Mark Avery not only exposed illegal raptor persecution but also the widespread burning and draining of heather moorland and the depletion of peat bogs. Through land management subsidies, taxpayers are unknowingly contributing to wildlife persecution and peat bog destruction in the UK uplands. When you read the transcription of the parliamentary debate in 2016 relating to Mark Avery’s petition for a ban on driven grouse shooting, you get an idea of why it is difficult to reach a consensus on conservation and why there have been so few prosecutions for raptor persecution.

For the time being, the driven grouse industry enjoys the protection of ministers who are shooters themselves or who are influenced by the lords, dukes, earls and wealthy business people who own the moors. Whether or not driven grouse shooting is banned in the future, and the arguments are complex, existing laws to stop raptor persecution must be enforced if we want to save magnificent rare birds from extinction.

The Birdcrime report says there were 68 confirmed cases of raptor persecution in 2017 but only four prosecutions leading to just one conviction. Magnificent birds of prey such as golden eagles, peregrines, Montagu harriers and hen harriers are disappearing in suspicious circumstances. Several hen harriers tagged as part of the RSPB EU-funded Hen Harrier LIFE project suddenly went missing over grouse moors. When a tagged bird dies naturally, the transmitter continues to work and the bird’s remains can be found, but in these cases the tag stopped transmitting and the birds were never found. Illegal persecution is thought to be the main reason for the drastic decline in hen harrier numbers with only nine successful nests in England in 2018 even though the habitat could support 300 breeding pairs.

Even Natural England, a non-departmental public body trusted with advising on nature protection and enforcing laws, is failing to adequately protect our wildlife, granting licences for acts that are illegal under the Wildlife and Countryside Act. According to the Guardian, while some licences are approved to kill birds for public health and safety reasons, others relate to protecting angling and fishing interests.

Wild Justice, set up by environmental campaigner Dr Mark Avery, Chris Packham CBE, who organised the People’s Manifesto for Wildlife and the People’s Walk for Wildlife, and Dr Ruth Tingay, raptor researcher and campaigner against persecution, recently challenged Natural England. Wild Justice is opposed to the general licensing scheme that allows the slaughter of wild birds, including Canada geese, gulls and crows, all year round without proof that non-lethal measures have been tried first.

But change is in the air as environmental champion Tony Juniper CBE takes up his new role as Chair of Natural England, bringing with him valuable experience from roles at Birdlife International, Friends of the Earth, WWF-UK, and the Royal Society of Wildlife Trusts. This is an inspirational nomination by Michael Gove.

There is optimism too for Michael Gove’s proposed post-Brexit Environment Bill and the 25-year environmental plan, heavily influenced by economist Dieter Helm, Professor at Oxford University and Independent Chair of the Natural Capital Committee. Helm advocates placing a value on natural resources and measuring biodiversity net gain to encourage conservation and leave the environment in a better state for future generations. Instead of local authorities each deciding whether to insist on net gain from developers, there will be consistency across the UK. A biodiversity net gain policy could even see precious hedgerows preserved rather than pulled up. To mitigate the impact on nature, developers would choose to conserve habitat during construction, create new natural habitat on the same site or in the local area, or pay compensation to fund national habitat creation. Given the Brexit mess, these benefits for nature post-Brexit give us hope, if the Government is true to its word.

Even in its current form, the Wildlife and Countryside Act provides legislation to protect nature, but what use are protective laws if they can be circumvented by perpetrators with clout? Rigorous enforcement needs financial and human resources as well as the integrity to ignore vested interests, otherwise we might have to take to the streets instead.