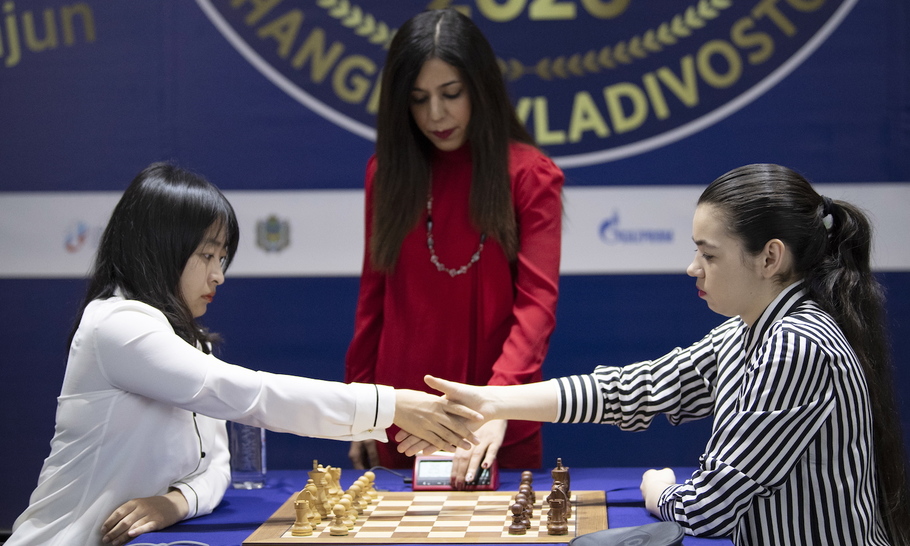 The story of Iranian Chess Arbiter Shoreh Bayat (pictured, centre) has been extraordinary. Shoreh seemed to have everything going for her, elegant, beautiful, educated, an intellectual and with such a global reputation for excellence as a chess arbiter that she was selected to oversee fair play in the recently concluded Women’s World Chess Championship in Shanghai.

Unfortunately, a slipshod photo of her, seemingly not wearing the hijab which is mandatory by Iranian law, even when Iranian women are outside the country, caused her endless problems in the land of the Ayatollahs.

In fact, as Shohreh explained, this was a trick of the camera angle, since she was wearing a permitted loose form of the hijab. Nevertheless, Iranian religious zealots jumped on their favourite bandwagon of screaming insult to religion and thus endangered Shoreh’s return to Iran, to the extent that she might even face the death penalty on her return. Certainly she faces the lash, imprisonment and prohibition from further foreign travel.

Accordingly, Shoreh took the plunge, abandoned the hijab entirely and, on a visa originally intended for Gibraltar, has surfaced in the UK, where she currently resides.

It goes without saying that Shoreh is exactly the kind of guest that we should welcome here. Not only that, I urge the civilised world chess community to band together and offer Shoreh every professional opportunity possible to display her arbiting skills and be rewarded commensurately.

Tournaments abound in Gibraltar itself, The Isle of Man, St. Louis, Russia, Norway and so on, where Shohreh can be gainfully employed. I will set the ball rolling now by offering Shoreh a book contract from my publishing conduit BuzanWorld to detail her experiences with the oppressive theocracy in Tehran. Shoreh, if you are listening, please get in touch. In any case I hope to meet, when Shoreh takes up her first arbiting post in the UK at the annual Oxford vs. Cambridge Varsity Match at the Royal Automobile Club, Pall Mall, London, next Saturday March 7.

The relationship between chess and Islam has occasionally been a rocky one.

As I pointed out last year in my very first piece for TheArticle, in the Islamic world over the past 1,000 years or so, chess has from time to time been banned, only for the prohibition to be regularly rescinded. When the Ayatollahs came to power in Iran, incidentally torpedoing my position as chess tutor to the Iranian Imperial Court, one of their first acts was to issue a fatwah against the playing of chess; this prohibition has subsequently been relaxed and chess is permitted once more.

This cyclical aversion to chess is difficult to justify, given that the original form of chess, Shatranj (see my column on Shakespeare and chess where the rules of Shatranj are fully explained) first flourished in the Baghdad Caliphate over 1,000 years ago. Indeed, Harun al-Rashid, the Abbasid Caliph from 786-809 AD, was known to be an ardent chess-player.

The most likely pretext for forbidding chess derives from a verse of The Koran which, when translated, reads: “Oh true believers, surely wine and lots and images and divining-arrows are an abomination of the works of Satan, therefore avoid ye them that ye may prosper.” Although chess is not specifically proscribed in The Koran, some Muslim lawyers around 800 AD extended the condemnation of lots, dice and images to chess.

Fortunately, Ash-Shafii, the 9th-century Islamic scholar and jurist, put forward counter­arguments. He asserted that chess, as a simulacrum of warfare, could be played, not just for a stake or for pure recreation, but as a mental exercise for the solution of military strategy and tactics.

This view has tended to prevail, not least because the Caliphs themselves were often avid chess-players, and during the late 9th and early 10th centuries in Baghdad, kept a court retinue of aliyat, or “Grandmasters”, such as Al Adli, Al Lajlaj and As Suli, who regularly conducted competitions for their rulers’ amusement. Tradition states, in fact, that the oldest chess problem on record was composed in 840 by the Caliph Mutasim Billah, third son and successor of Harun al-Rashid.

Chess has graduated from the pastime of the Caliphs to becoming an international sport, but the Ayatollahs seem to have missed the point that being part of a world sporting community brings obligations as well as benefits.

Thus, until recently, Iranian chess players in international events were granted a “fudge” by the world governing body for chess Fédération Internationale des Échecs (FIDE), which avoided their having to play against Israeli representatives.

This immoral dispensation is no more. The ancien regime of FIDE has been swept aside and thanks originally to the efforts of our admirable new FIDE Vice President Grandmaster Nigel Short, Iranians must now face Israelis in tournaments, when the situation demands it, or lose by default.

I interviewed Nigel during the tournament in Bunratty, Republic of Ireland, last week and the game this time is his ultra rapid demolition of the Grandmaster and former World Championship Candidate, Vlastimil Hort.

The result of the tough new FIDE stance is that those Iranian talents who wish to make chess their life career are defecting in droves. A key example is Alireza Firouzda, victor of this month’s elite tournament in Prague. Confronted with the choice between loyalty to the medieval superstition of the Tehran Theocracy, or pursuing his chess career and aiming to become World Champion, Alireza chose freedom of thought and Paris as his future.

The Iranian quandary calls only too readily to mind the bulwarks against freedom of thought symbolised by the Berlin Wall, and we all know what happened to that.

As Friedrich Schiller, the German poet and thinker, and one time Berlin resident originally wrote (before the 18th-century German political censors bowdlerised his words by substituting “Freude” or ‘joy’ for “Freiheit” or ‘Freedom’, which Beethoven subsequently adopted for his 9th Symphony “Ode to Joy”):

We enter holy one, intoxicated with fire, your divine realm.”