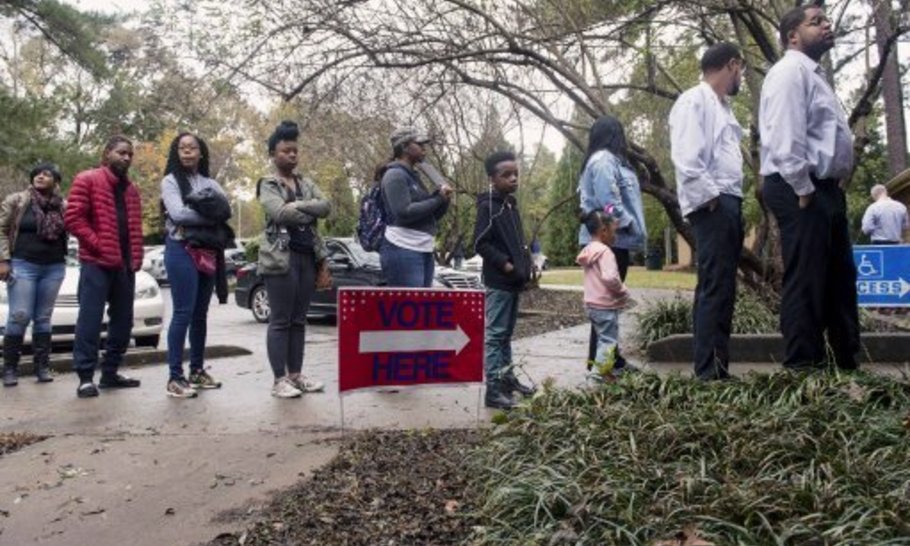 In a piece for TheArticle last year, I posed the question whether Britain is importing voter suppression from the US. In another article  in February, I went on to explore the topic of voting fraud, ostensibly the reason for the British Government proposing the introduction of a photo identification requirement for voters. Voter suppression, which I defined as “the attempt to manipulate the vote by disenfranchising certain groups”, has only recently become an issue in the UK, but has a far longer pedigree in the United States.  Donald Trump’s claims that the election was “stolen” from him by voting fraud – claims thrown out in multiple court cases – were treated as risible by most people, but not all. Certainly not by his die-hard supporters, some of whom in Georgia have been using the claims to introduce controversial voting laws.

Georgia, a former Republican stronghold, was a surprise defeat for Trump in the presidential election, but the state authorities remained in Republican hands. As election arrangements are devolved in America, on 25th March the Republican Governor Brian Kemp signed into force new voting laws. The 98-page Act contains a myriad of provisions that opposing campaigners say, taken together, represent “restrictions that haven’t been seen since the Jim Crow era” (“Jim Crow laws” were sustained attempts in some parts of the US to disenfranchise black voters.)

Black voter suppression in the US has evolved significantly since the blatant examples of its origins in the aftermath of the American Civil War after 1865. It now takes the form of apparently neutral measures that are, in fact, designed to disadvantage, demoralise and deter black voters. Many of the provisions in the new Georgia law, especially around voter identification, are highly technical, but just one example that has attracted public attention are restrictions placed on campaigners’ ability to hand out water to voters waiting in queues to vote. A study showed that at a polling place where at least 90 per cent of voters were white, waiting time was on average six minutes, while at a polling station where 90 per cent of voters were black, the average waiting time was 51 minutes.

Here’s one response to the new laws: “Last week, the Georgia legislature passed a sweeping voting reform act that could make it harder for many Georgians, particularly those in our Black and Brown communities, to exercise their right to vote. The entire rationale for this bill was based on a lie: that there was widespread voter fraud in Georgia in the 2020 elections. This is simply not true. Unfortunately, that excuse is being used in states across the nation that are attempting to pass similar legislation to restrict voting rights.”

Just the sort of overblown rhetoric to be expected from disgruntled Democrat politicians or excitable civil rights activists. But that’s not where the response came from: it came from the heart of corporate America, in an internal memo to employees from the Chief Executive Officer of Delta Air Lines, Ed Bastian. He was not alone. Coca-Cola is another big player in Georgia and its Chief Executive Officer, James Quincey, echoed Bastian’s view: “Let me be crystal clear and unequivocal. This legislation is unacceptable. It is a step backward and it does not promote principles we have stood for in Georgia around broad access to voting, around voter convenience, about ensuring election integrity.”  Unsurprisingly, Donald Trump has called for a boycott of Delta Air Lines and Coca Cola.

If the response of corporate America is something of an eye-opener to us in the UK, how about the response of sporting America? The people who run Major League Baseball (MLB) are, like most sporting authorities, instinctively apolitical and the diversity of its players – only 8 per cent black compared, for example, to less than 30 per cent non-Hispanic white in American Football – would not suggest any sort of stand being taken on racism.

But Rob Manfred, the MLB Commissioner, joined the clamour: “MLB fundamentally supports voting rights for all Americans and opposes restrictions on the ballot box. Fair access to voting continues to have our game’s unwavering support.” He proceeded to move the MLB’s 2021 All-Star Game (a sort of baseball FA Cup final, with teams specially created for the event) from Atlanta, Georgia to Denver, Colorado.

Faced with this unprecedented blow to Georgia’s economy and prestige, the state’s Republicans then started to get “theological” about the technicalities of their voting laws compared to Colorado’s, arguing the toss about which state’s electoral systems were more restrictive. But their arguments were taken about as seriously as their denial of any malign motive. President Biden described the new laws as a “blatant attack on the Constitution and good conscience”.

This is not the first time sporting America has shifted a match in response to political developments. The National Basketball Association (NBA) also has an All-Star Game and, in 2016, it was moved from Charlotte, North Carolina in response to the state passing a “bathroom bill”, the Public Facilities Privacy & Security Act, which was argued to be transphobic. In 1990 the National Football League (NFL) took the XXVII Super Bowl away from Tempe, Arizona, because of the state’s refusal to make Martin Luther King Day a public holiday.

Perhaps more predictable is the response of Hollywood. Apple Studios, which is making a film with a black director and leading actor about slavery called Emancipation, has just announced: “We cannot in good conscience provide economic support to a [state] government that enacts regressive voting laws that are designed to restrict voter access. The new Georgia voting laws are…impediments…to prevent many Americans from voting”. The studio has shifted production of the film out of the state.

Voting arrangements in the US are far more complex than the simple polling station/postal/proxy voting options here and are made more so because they are different in all fifty states. They then vary even down to the county or precinct level. But one feature that prompted the cries of “restrict(ion of) voting rights/access…step backwards…regressive voting laws…impediment to voting” was stricter identification rules for voters. This brings us back to the UK, where the Government has restated its intention to press ahead with the introduction of mandatory photo ID in polling stations in a Bill promised this year, in good time for the general election in 2023.

But how far can we read across from the US to the UK? Governor Kemp’s response to criticism of the new laws in Georgia was to claim that “the aim was to make it easier to vote, harder to cheat”. Here, the Conservative Cabinet Office minister Chloe Smith’s response to similar criticism of her government’s proposals: “This is not about voter suppression, nor is it about disenfranchisement. This is a reasonable step to protect voters’ choices.” The name of the controversial Georgia measure: the Election Integrity Bill 2021. The name of the UK Government’s proposal: the Election Integrity Bill 2021. (That’s enough comparisons, Ed.)

The British Government’s proposals have met with condemnation from the “usual suspects” – opposition parties, civil liberties organisations and campaign groups like the Electoral Reform Society. But what is the likelihood of a response here comparable to that of cultural, sporting and corporate America to Georgia’s voting laws? I suppose we do have Marcus Rashford.