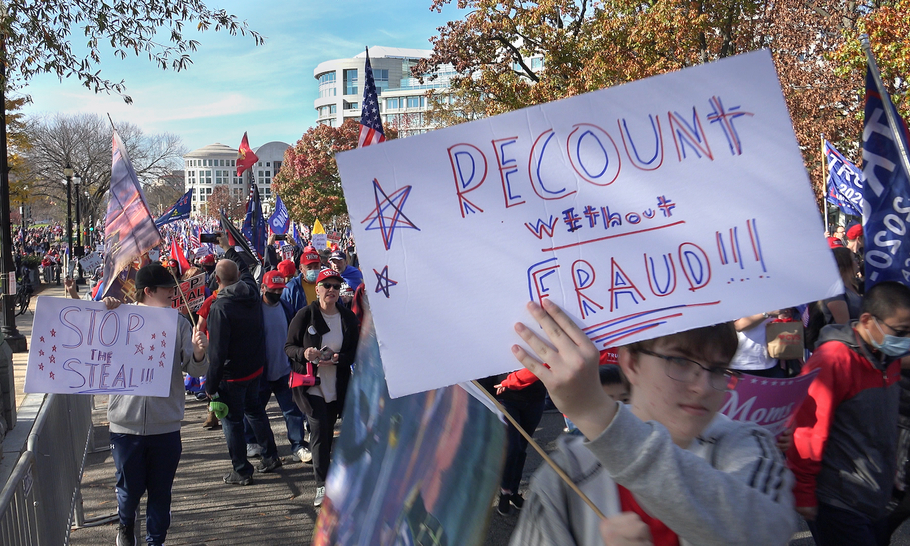 Two elections in quick succession have been challenged by the losers claiming “voting fraud” as a reason to overturn the result. The military seizing power in Myanmar is nothing new; it has done so several times since independence in 1948 and has effectively controlled the country since 1962. The novel feature, this time, was its claim of voting fraud as justification for challenging the result of an election which it lost by massive margins. The junta leader, Senior General Min Aung Hlaing, made a TV appearance on Monday, justifying the coup on the grounds of “voter fraud “. He gave no details and provided no evidence to back up his claim.

It is not difficult to work out who the military got the idea from. The Myanmar election was held on November 8, 2020. Two days earlier Donald Trump had held a press conference in which, commenting on the US presidential election five days before, he claimed “…if you count the legal votes I easily win. If you count the illegal votes, they can try to steal the election from us…”

Social media crackpots went into overdrive, throwing the two elections into the same voting-fraud conspiratorial melting pot. Indeed, there were so many claims that the Dominion Voting Systems machines used in the US elections had also been used in Myanmar’s elections, that the company was forced to issue a categorical denial. Subsequently, a Reuters “fact check” showed that no machines, Dominion or otherwise, were used in the Myanmar elections. All ballots there had been counted by hand.

But is there reason for a mature democracy such as the UK to be worried about electoral fraud? Are electoral institutions, systems and rules robust enough to deal with attempts to cheat and, perhaps more significantly, is the sense of propriety and probity of the UK’s political culture strong enough to resist attempts to challenge properly conducted elections with false claims of fraud? Three cases from recent years can help us answer those questions.

First, it is certainly the case that voting irregularities happen – in some cases, quite dramatically. In the 2016 elections for the London Mayor and Assembly, Chief Rabbi Ephraim Mirvis went early to cast his vote in his local polling station in Barnet, only to be told he was not on the electoral register. It turned out that when the electoral lists had been printed the day before, a wrong key had been pressed: the lists sent to all Barnet’s 155 polling stations only had newly registered voters on them. Voters who were turned away were asked to return later in the day, while town hall staff frantically printed out correct lists and biked them out to polling stations. Unfortunately, the Chief Rabbi had been booked on a flight and couldn’t wait, so he missed the chance to vote. But the successful mayoral candidate (Labour’s Sadiq Khan) polled almost 240,000 more than his nearest rival on the first round, so there was no serious suggestion of any sort of re-run. Happily, the losers did not see this as an opportunity to cry “fraud” and challenge the validity of the election — as their counterparts in Myanmar and the US might have done.

Second, can the outcome of elections be affected? Another example shows that they can be, and equally dramatically. In Winchester, in the 1997 general election, the Conservative junior health minister Gerry Malone was facing a strong challenge to his 8,000 majority from Liberal Democrat Mark Oaten. It was close. A full twenty hours after the counting had started, and after much argument over “spoilt” ballot papers and many recounts, Oaten was declared the winner — by two votes. But 54 ballot papers had been discounted for lack of the official mark (ballot papers are marked with an embossed stamp at the point of issue in the polling station). Lawyers for Malone launched a legal challenge. The High Court ruled that the lack of the mark could have been nothing more than a simple clerical error, but the rules simply did not allow those 54 votes to be counted. However, the justices decided that because there were more of them than the majority, the outcome could have been affected and the result was declared void. Malone was delighted: courts are normally very reluctant to overturn election results, but he had got his re-run, which was held just under six months later. Oaten won the re-run — with a majority of 21,556. The creaking UK electoral legal framework, based on the 19th-century Representation of the People Act, is often said to be in need of reform, with some justification – but in this instance the law seemed to get it just about right.

Finally, what evidence is there of actual voting fraud in the UK? Here a single case from the London Borough of Hackney in the run-up to the 1998 council elections provides a comprehensive answer. Two friends and borough councillors, one a Liberal Democrat and the other a Conservative, committed voting fraud on such an industrial scale that their actions read like a textbook guide to the different ways to cheat, manipulate and play the system: they tricked pensioners into handing over their proxy votes by claiming they were signing a petition about refuse collection, seven non-existent voters were registered in a derelict house (with one of the conspirators noting to himself “seven votes in the bag” against the address); he also registered his brother as two separate voters. In addition, 84 votes were cast from a residential college that had only 30 beds and one man turned up at a polling station to find his vote had already been cast. There were underage voters, voters without nationality qualifications, and the list goes on.

Described at the time as the “UK’s biggest electoral fraud” when the two were brought to trial in 2001, the prosecuting barrister argued that the control of the borough — in which, at that time, the Conservatives and Liberal Democrats both had 31 seats and Labour 29 — could have been affected. One of the conspirators was jailed for six months and the other for four. Breaches of electoral law are all handled by the Metropolitan Police’s Special Branch and here they did their job well. Unwisely, some Labour parliamentarians sought to make petty political capital out of the fact that the guilty men were from the other two main parties; but, in general, political parties are loath to do too much finger-pointing. They can never be sure that it won’t be a maverick from their own side who tries it on the next time.

In fact, while there has been some suggestion (discussed here by me) that in recent years party political motives may underly some Government policy on elections, experience has shown a high degree of public trust and confidence in the system. While it is said that some Leave supporters demanded pens rather than pencils to mark their ballot paper on entering polling stations to vote in the EU referendum, disaffection in the UK has never crossed over into distrust to any real extent. It is for the reader to draw their own conclusions on whether electoral institutions, systems and rules are robust enough to deal with attempts to cheat and whether the honour and dignity of UK politicians is greater than the tawdry attempts to cling to power of Donald Trump and the Myanmar military. As Tom Stoppard wrote: “It’s not the voting that’s democracy, it’s the counting.”