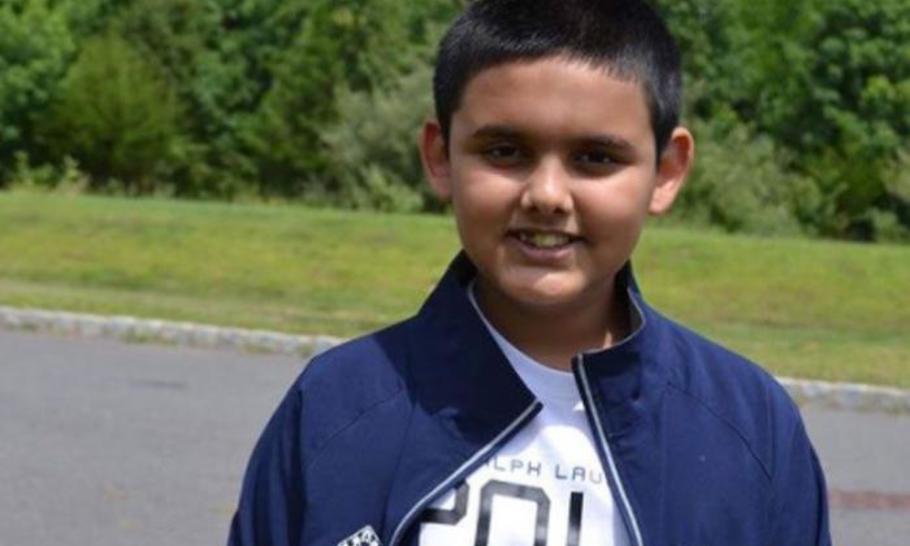 He was the greatest player that the Caribbean Islands have ever produced. He was born in Havana in 1888 and learnt chess at the age of four, amazingly with no formal tuition. Instead, the infant José Raúl Capablanca (1888–1942) picked up the moves by watching his father play with friends. This was just about the time when the World Championship match between Wilhelm Steinitz and Mikhail Chigorin was being played in Capablanca’s hometown, where chess was the headline news.

The Cuban prodigy was the first modern chess player to achieve superstar status. His name was known to millions throughout the world, even those who did not play chess. Only Paul Morphy, Bobby Fischer and Garry Kasparov have achieved similar widespread renown. In his 1921 match, when he toppled Emanuel Lasker from the world throne, he became the first man in the history of chess to avoid losing a single game while winning the World Championship. The myth of invincibility clung to him throughout his career and there was universal shock when he lost the coveted title in 1927 to the Russian, Alexander Alekhine, after a mammoth struggle involving an amazing 25 draws.

José Capablanca’s early education was sponsored by a local industrialist, who paid for his protégé’s schooling in America. In 1906 he entered Columbia University to study engineering, but spent most of his time at the famed Manhattan Chess Club, where he played frequently against Lasker, the then World Champion. In 1908, perhaps hoping in vain for some sign of academic results, his patron withdrew his support and Capablanca was left to try to earn his living… as a chessplayer. At first revenues were thin, but in the following year he defeated Frank Marshall in a decisive match, winning eight games, losing one and drawing fourteen. At Marshall’s generous insistence, the young Cuban was then invited to compete in the tournament of San Sebastian (Donostia) in 1911. This was intended to be an elite event, where all the contestants were supposed to have won at least one Grandmaster tournament. Two other participants, Aron Nimzowitsch and Ossip Bernstein, protested that Capablanca should not be included. His honour demanded that Capablanca (pictured below) should destroy his two naysayers and carry off first prize, both of which Capablanca duly achieved. 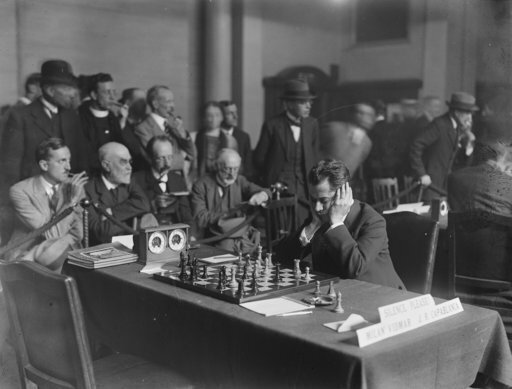 Two years later the Cuban government rewarded Capablanca with a sinecural position in the foreign office, which afforded him ample opportunity for travelling and playing chess. He had no particular duties, but was to be an international ambassador, a famous and attractive figure, representing Cuba wherever he went. In 1921 he reached the pinnacle of his chess career by seizing the World Title from Emanuel Lasker in his home city, Havana.

In the later 1920s, however, Capablanca’s tournament record as world champion was neither very active, nor overly imposing. His fortunes revived in New York in 1927, when he won an immensely strong, six player, quadruple round, tournament without losing a single game over 20 rounds. Once again the myth of invincibility was revived. Yet a few months later, just 10 days before his 39th birthday, Capablanca conceded defeat in his World Title match against Alexander Alekhine. Writing much later, Alekhine explained that Capablanca had made the fatal error of overestimating his own powers and underestimating those of his opponent.

Capablanca never raised the prize stakes necessary for a return match, although he continued playing in tournaments with mixed results. In 1936 he won a powerful tournament in Moscow, a point ahead of Botvinnik. In the same year he tied with Botvinnik for first place at the elite Nottingham Tournament, ahead of the World Champion, Max Euwe. His last first-class games were played in the 1939 Olympiad in Buenos Aires, where he represented Cuba on top board. The outbreak of the Second World War, whilst the Olympiad was in progress, heralded a period of disruption for many of the world‘s leading players. Capablanca was not to play at top level again and he died of a heart attack in the Manhattan Chess Club in 1942.

In Cuba, Capablanca has left a legacy of fervour for chess. Since the time of the 1959 revolution, chess has been given extensive official encouragement. In 1966 I represented England, while Havana was host to the 17th chess Olympiad. In Havana, I watched first hand as Fidel Castro played chess with both Bobby Fischer and the reigning World Champion of the day, Tigran Petrosian. Che Guevara was known to be much more adept at chess than Fidel, but, by the time of the Olympiad, Che had already left Cuba to foment revolution in other parts of Latin America. Giant posters of the eternal revolutionary were everywhere to be seen, but equally popular was Capablanca’s legacy, and his reputation, as perhaps the greatest child prodigy chess has ever witnessed, lives vibrantly on. In my column Die Harmonie der Welt: Chess, I pointed out that chess, mathematics and music all exhibit a natural harmony, which very young people can access, with no need for life experience. A twelve year old can create a chess masterpiece, a five-year old Mozart could compose a passable minuet and Srinivasa Ramanujan (1887–1920) mastered advanced trigonometry by the age of 13 (see 2nd table below). I suggest, though, that writing War and Peace, or À la Recherche du Temps Perdu, would be quite beyond the capacity of any pre-teen, however gifted, talented or prodigious.

Chess prodigy Sergey Karjakin, later to become a World Title Challenger, graduated as the youngest ever chess Grandmaster in the world at the age of 12 years and seven months back in 2002. This record has now been broken. The new holder of the accolade of youngest Grandmaster is Abhimanyu Mishra, who achieved this feat at 12 years, four months and 25 days, beating Karjakin’s 19-year old record by 66 days. The chirpy 12-year-old even opined that he could have smashed the previous record even more decisively, had it not been for a paucity of qualifying competitions during the various pandemic lockdowns.

According to the authoritative British Chess Magazine, having spent several months in Hungary playing tournaments back-to-back, with the goal of accumulating the required results for the Grandmaster title, the record-breaking moment was achieved when Mishra defeated the almost equally youthful 15-year old Indian Grandmaster Leon Luke Mendonca. Mishra himself is yet another example of the teenage Indian school of Grandmasters, many of whom are distributed in a worldwide diaspora. Abhimanyu is a resident of New York, while in London we have Shreyas Royal, a one-time pupil of the Praeceptor Britanniae, Julian Simpole, who also trained leading UK Grandmasters, David Howell and Luke McShane. Shreyas is now clearly on track to break Howell’s record as the youngest UK player ever to earn the Grandmaster title.

The British Chess Magazine also pointed out that this latest triumph is not the first record set by Abhimanyu Mishra. The boy from Englishtown, New Jersey, was already both the youngest master in US history at nine years and two months, and the youngest ever international master at 10 years and nine months.

He learned to play chess at the age of two-and-a-half, having been introduced to the game by his father. “My ultimate goal is to become world champion, but my next intermediate goal is to become a super Grandmaster and I’m hoping to do that before the age of 15,” he said. As is the case with many other chess talents, Abhimanyu struggled to get funding so he could travel and compete. His father Hemant, a data management professional, used his savings to fund his son‘s chess ambitions. The family then turned to crowd-funding. By early July they had raised $16,500. Speaking live on the Meltwater Champions Chess Tour broadcast, the relative Lilliputian said he has put everything into earning the title. Asked if he does anything outside chess, he pointed out that he was fully focused on the game: “It‘s taking up so much time that there isn’t any left… All day is chess.”

Here is a table of the ten youngest chess Grandmasters, four of whom are from India and two, strikingly, from Uzbekistan. 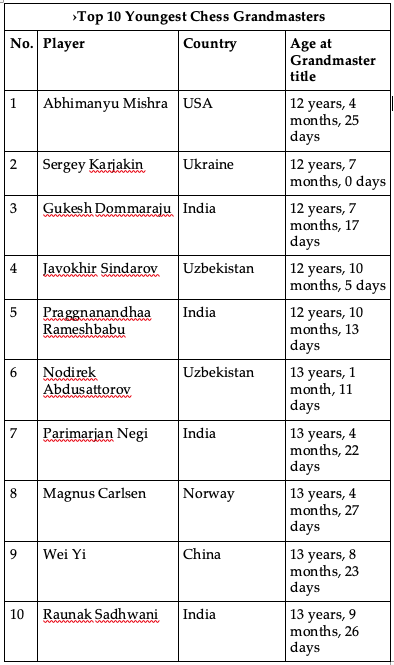 To conclude this week, my earlier elucidation of the great historical IQ’s according to CMM Cox and Tony Buzan has aroused a considerable degree of comment, notably from renowned expert Martin Kemp, who is one of the world’s leading authorities on the life and works of Leonardo da Vinci, as well as Dr Michael A Crawford of Imperial College. This week, therefore, I offer my own preferred evaluation of this controversial topic.

Before embarking into the minefield, I should mention that Garry Kasparov, World Chess Champion from 1985–2000, registered an IQ score of 136 on the Stanford-Binet Scale, with 132 being the entry threshold for MENSA, the high-IQ society. Tony Buzan himself held a world record “off the scale” in the parallel Torrance rating of creative IQ. 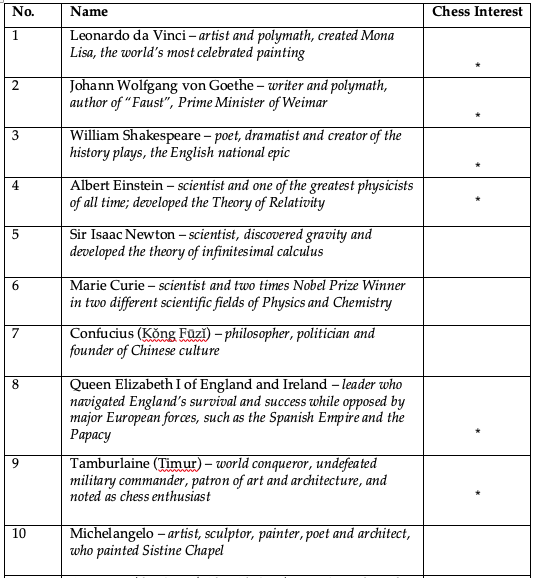 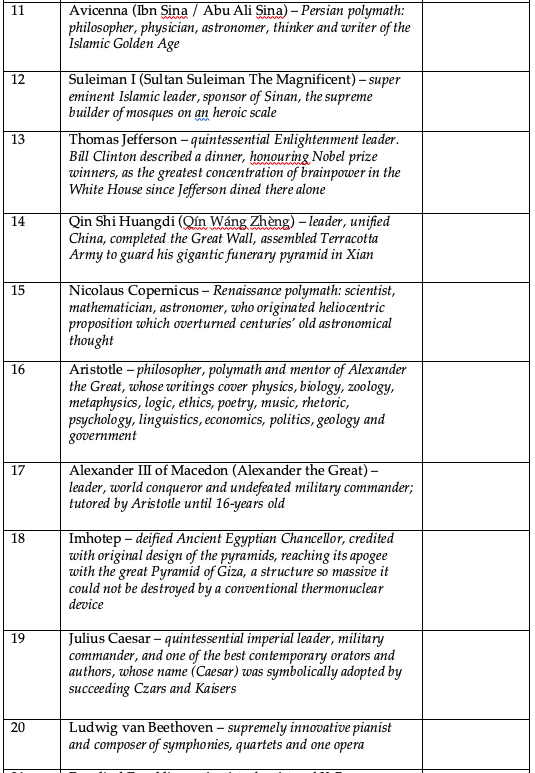 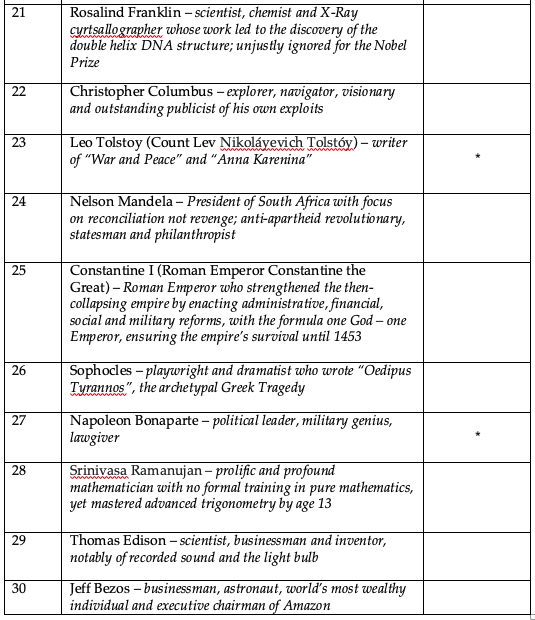 Although many cultures will have different takes on this, I am happy to juxtapose and expose my lucubrations alongside those of the IQ experts, Cox and Buzan. I look forward to opposing choices, corrections and conclusions from readers who may take entirely different positions from those which I have proposed. Lively opinions are already being generated on our ratings pages.

Analysing “my” group I find that there are ten national, imperial or military leaders; eight scientists/inventors; three philosophers; three literary giants; two artists; one musical composer; one mathematician; one businessman; and one explorer. As for nationalities: Britain four; Ancient Greece three; USA three; Germany three; Poland two; China two; Italy two; Roman Empire two; the Middle East two; Uzbekistan one; India one; South Africa one; France one; Spain one; Russia one; and ancient Egypt one. Those whom I have identified as definitely playing chess, commenting on chess, or owning a chess set, I have marked with an * in the column “Chess Interest”.

This week’s games are victories by the young José Raú l Capablanca  and the world’s newest and youngest Grandmaster. In 1901, Jose Raul Capablanca vs Juan Corzo . And 120 years later in 2021, Levente Papp vs Abhimanyu Mishra .