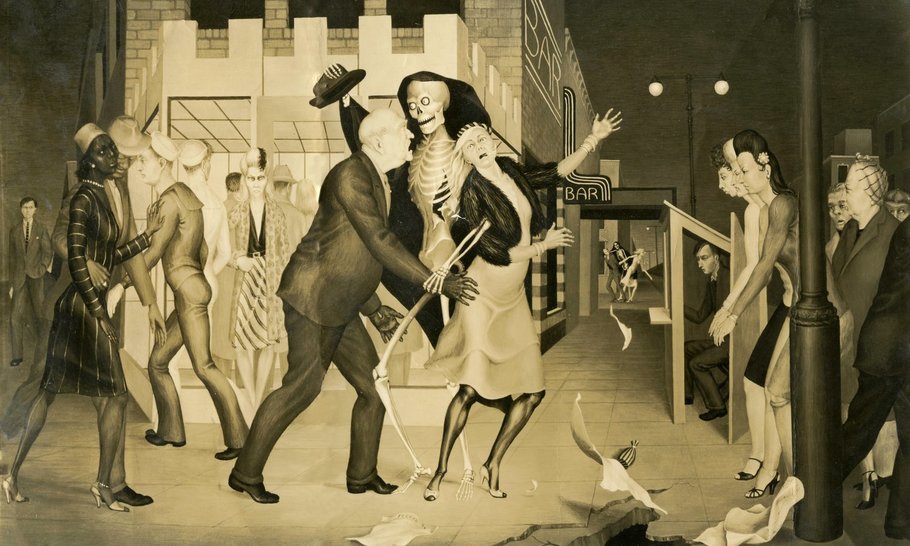 At the beginning of his postwar career and while still in his twenties, the American artist George Tooker (1920-2011) expressed his dark vision in his three greatest works.  Subway portrays the alienated crowd, Children and Spastics the terrified victims, Dance the flight from death.  All three paintings combine realistic details with a nightmarish atmosphere to create a vision of modern man: isolated, helpless and inevitably doomed.

Explaining the locale of Subway, his most famous painting, Tooker wrote, “I was thinking of a large modern city as a kind of limbo. The subway seemed a good place to represent a denial of the senses and a negation of life itself. Its being underground with great weight overhead was important.”  Subway depicts the main level of the station, with one empty staircase on the right leading up to the daylight, the other with two figures descending into dark oblivion. The picture contains twenty, sometimes shadowy, people, all wrapped in thick overcoats and trapped in a strong-beamed, low-ceilinged, labyrinthine underground train station. The people on the main and lower floors, confined by heavy black iron fences, are imprisoned in a modern version of Dante’s Inferno, with no possibility of salvation in Purgatorio, let alone Paradiso.

In the left rear three men, decreasing in size and visibility, peer warily out of constricted white-tile phone booths that look like upended coffins. Behind them a man looks uselessly into a wall and two other figures disappear behind him. The central figure in the front, a woman in a bright red dress and blue overcoat, with widely-spaced eyes, high forehead and tightly-curled brown hair, has an anxious expression.  She instinctively puts her oversized hand on her belly as if to protect her unborn child from the harsh and threatening world.

Three identical men, two of them carrying a briefcase and portfolio, have fedoras pulled low on their foreheads, blank deep-set eyes, blunt noses and downturned mouths.  They approach from behind the woman, don’t seem to recognise her but intensify her fear.  Behind these men, two figures recede into the distance toward an older woman with a fur collar seated tensely on a chair. She defines the distant perspective and passively awaits her fate. Caught behind the iron fence on the right, a young man with hunched shoulders and hands in his pockets lounges idly against the wall. Another woman seems to be caged in the fixed and spiky no-exit revolving door.

Tooker, imagining the subway as a place of menace, violence and despair, recalls the suicides who push others or throw themselves under the trains. All the people, sequestered in their hate, are frozen, going nowhere and apparently doomed. Close to, but isolated from each other, they may never escape from their eternal punishment. I’m particularly moved by this painting because my dear grandmother had a fatal heart attack in the New York subway.  When she fell down on the concrete platform the surging crowd thought she was drunk and no one tried to help her as she lay dying.

Tooker’s painting creates a vivid visual parallel to the sense of isolation within the crowd that was described by two major authors.  In his chapter on “Crowds” in Paris Spleen (1862), Baudelaire incisively observed that modern man “does not know how to populate his solitude, does not know either how to be alone in a busy crowd.”  In The Origins of Totalitarianism (1951), Hannah Arendt described modern man as a radically lonely person who, “without any other special ties to family, friends, comrades or even mere acquaintances, derives his sense of having a place in the world only from his belonging to a movement” or a crowd.

In Children and Spastics (1946) five ugly, dwarf-like, mocking, malevolent children — completely without their traditional innocence — are dressed entirely in black and accompanied by a snarling whip-tailed black dog that bites the shoe of a sick spastic child.  One crouching boy wears a metal helmet with spiky spears, like the two little black monsters to the left of the cracked egg in Hieronymus Bosch’s The Garden of Earthly Delights (1510).  Two others wear threatening tall paper hats with eye holes, copied from the hoods worn in religious processions during Holy Week in Spain and adopted by the Ku Klux Klan.  Two of the boys, armed with long black metal rods, taunt the terrified, recoiling victims who are backed into a corner and can neither escape nor defend themselves. The three elongated, skinny, pale, twisted, twitching, grotesque and agonised spastics — afflicted with involuntary muscle contractions — have open mouths, glaring eyes and elongated splayed fingers like the models of the Expressionist artist Egon Schiele.

The eight figures — five against three — are enclosed within pyramid-tipped blood-red stone walls, the lower one topped with a border of fierce black nails. A small staircase and railing behind them leads nowhere. The spiked metal fence behind them and moveable fire-escape ladder above them intensify their imprisonment, as one man’s bent elbow touches the fence. Two tall square buildings, with blank black windows and smoke escaping from one chimney into a pale blue sky, tower above the walls. The fearful, vulnerable spastics are trapped and helpless. The cruel children — bonding with their prey — are about to intensify their attack by stabbing and perhaps even killing their victims.

Dance (1946) portrays a complex pattern of twenty-three figures on intersecting city streets, doing a medieval Dance of Death inspired by Hans Holbein’s woodcuts of 1538.  Their morbid movement, in the front centre, is led by a black-caped, wide-eyed, grimacing, bent-legged skeleton. His bony arms grasp a fleeing woman and lift the hat from the head of an older, open-mouthed bald man who pursues and assaults her.

Wearing an orange dress and shoes, black fur jacket and stockings, the woman flings out her gloved hands with desperately spread fingers, her blond hair streaming behind her, in an open-mouthed and hopeless attempt to elude her predator and to escape from death.  A large jagged chasm in the city sidewalk opens before them, like the death-trap that sucks in Don Giovanni at the end of Mozart’s opera. The hellish air that rushes out from below the ground blows up five pieces of greyish-white paper with vague but troubling messages, one of them bearing Tooker’s name, and a tightly-bound orange-and-black cloth pouch that holds coins or spices.

These floating, birdlike papers form a pyramid that leads, under a bluish black sky, to two moon-like street lights and two curving neon signs advertising a bar, and to a smaller caped skeleton that grasps another doomed couple. As usual in Tooker’s work the surrounding crowd is indifferent to the tragic fate of the victims.  As WH Auden wrote in Musée des Beaux Arts, “they had somewhere to get to and sailed calmly on.”  On the right a sullen seated newsagent is confined in his tight empty cabin.  Three tall, high-haired women with open-toe shoes, are seen in profile and march bent together in mechanical formation.  Behind them four other partially obscured figures, dominated by a stout, jowly older woman wearing a yellow snood, are disappearing out of the picture.

On the left are a well-dressed black couple, two sailors heading in the opposite direction, three people getting cheap food at a crenellated shop based on the old White Tower hamburger joints. A scowling, garishly dressed prostitute, eyed by one sailor, stares angrily ahead while waiting for custom. A small man, wearing a brown suit and with one hand in his pocket, calmly enters this frenzied scene from the left rear and is actually a self-portrait: Tooker himself. All these joyless, deluded night-lifers, except for the artist who witnesses this impending catastrophe, are unaware of the mortal danger and think they can escape from the inevitable death of all mortals.

Tooker, who spent his first forty years in New York before moving to rural Vermont in 1960, sees the inhabitants of the hellish city as indifferent to suffering and demonically cruel. He uses realism to portray menace and evil, and his disturbing yet poignant paintings are redeemed by their fascinating details, brilliant technique and compassionate themes.