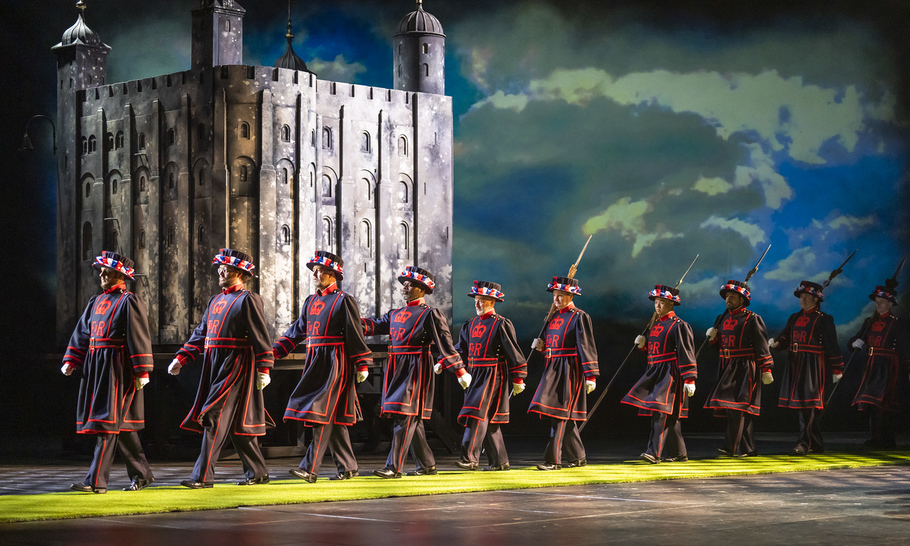 A scene from Yeoman Of The Guard by Gilbert &amp; Sullivan @ Coliseum. ©Tristram Kenton

This Yeomen of the Guard was huge fun. Gone are the days when the English National Opera wanted to be at the vanguard of companies creating new and sometimes absurd twists on much loved operas. That has disappeared, at least for now, and sensible stagings are the order of the day. I went with a friend who had encountered Gilbert and Sullivan at school, and he loved it.

The story centres on Colonel Fairfax, unjustly imprisoned in the Tower of London and due to be executed the next morning. The Yeomen Warders who guard the Tower are the Beefeaters (a name going back to Tudor times when they were permitted to eat as much beef from the king’s supply as they could manage).

The trick of the story is that should Fairfax die unmarried his estate will be inherited by his wicked cousin, whose trumped up charge against this honourable gentleman landed him in the Tower in the first place. Fairfax is beloved by Phoebe, daughter of Sergeant Meryll, and an audacious plan is cooked up to save him, with the help of roving entertainers Jack Point and Elsie Maynard. High stakes and fantastical plots, including a sham marriage that turns out to be a ticket to happiness, drive this operetta forward, and director Jo Davies has done a superb job of staging it for the ENO.

We see the Tower of London itself, along with Beefeaters, Guards in tall bearskin caps, and wonderful skies in the background of Anthony Ward’s designs. All done in an unfussy production that complements the music with delightful choreography, emphasising the playfulness inherent in the story while never going over the top. Musically this was arguably Arthur Sullivan’s most accomplished score to date (1888) and the opening song of Act II, “Night has spread her pall once more”, was beautifully expressive under the baton of Chris Hopkins, principal conductor of the English Sinfonia and Orchestra of the City.

He conducted an excellent cast, with Alexandra Oomens particularly notable as a delightfully cheeky Elsie brimming with life and vocal strength, and Richard McCabe slyly charming as Jack Point, with his second-hand jokes and conjuring tricks. Anthony Gregory made a noble Fairfax, with Heather Lowe hugely expressive as Phoebe who eventually marries him. In the meantime Neal Davies as her father portrayed a sturdy Sergeant Meryll, with Susan Bickley a stout and fearsome Dame Carruthers, until she melts as the Sergeant expresses his love. As deputy warden under the patrician Sir Richard Cholmondeley (Steven Page), who first appears in khaki uniform, she embodies the terror of the Tower, along with the sinister presence as the gaoler (John Molloy) who is easily bamboozled by Phoebe.

Gilbert and Sullivan fans may quibble with details such as the mix of costumes. But they and others who are new to this operatic double act will surely love the irrepressible humour on stage, and the musical performance, in what is perhaps the most emotionally engaging of the Savoy operas.