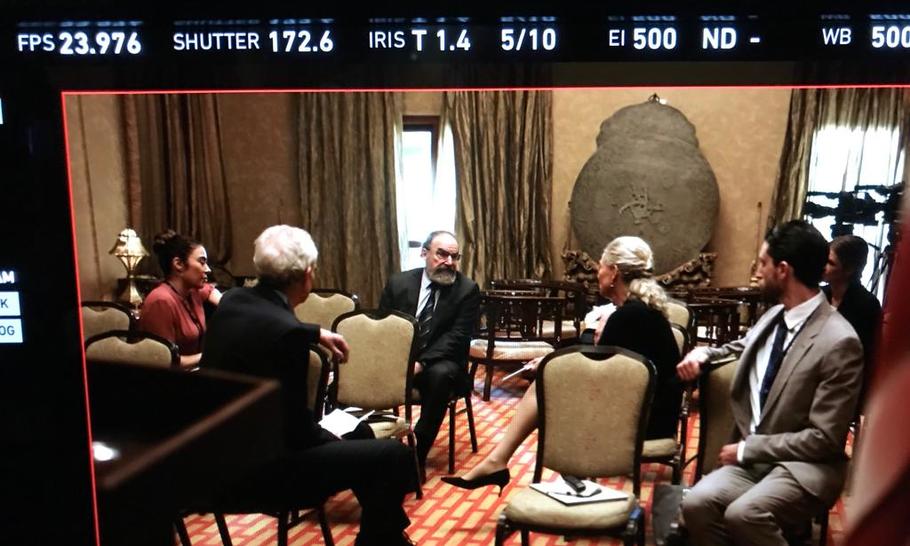 Through the lens filming Homeland

My 42 seconds of fame in Homeland came by the oddest route — through a friend of my son. I have known Nick since he was 10 years old. Now he worked for a casting agency that had the contract to find real reporters to play reporters for a scene in a series about Afghanistan. Nick knew I had been a foreign correspondent for the BBC most of my adult life, and knew I had been to Afghanistan a lot. Was I interested in an audition?

You bet I was. I have been a great admirer of Homeland since the beginning. It is the best thing to come out of American TV for a long time, with the compelling story of the American hero Brody, turned into a secret al-Qaeda suicide bomber while in captivity in Iraq. The writing is first-class, the relationships grown-up, the characters complex, not always predictably good or bad, and most importantly for those of us who have spent a lot of time in Afghanistan and Iraq, it strives for authenticity.

The soldiers on screen are real ex-soldiers; now they were looking for real reporters. When I met the lead creator and writer Alex Gansa during filming, it was clear that he had talked to a lot of people who know what is going on in Afghanistan to craft what is going to be the last series, based around peace talks with the Taliban.

This is a high-risk enterprise, given that there are currently peace talks going on with the Taliban, but so far so good in terms of fact and fiction. The opening scene, where I was “Reporter 1” was set in a resort hotel in Doha. This precisely matches reality; America has been talking to the Taliban in Doha since last year. Actually the filming is in Morocco, where the government gives generous terms to film-makers, and the Moroccan military will lay on a Blackhawk helicopter or two when required.

The advantage of filming the press briefing in quite a shabby function room, in a hotel whose main business is a casino, was that it needed no set. There were padded hotel wedding reception chairs, indifferent paintings on the wall, and a makeshift podium. This was just the kind of room where I have spent too much of my life, waiting for press briefings. Our scene — early in the episode — is used as an explainer, with Saul, now the US National Security Advisor, played by Mandy Patinkin, coming in to tell us how the talks are going. My lines — “What do you mean by that?”, “Why?”, “Which you just said isn’t an option,” — were written to give Saul a chance to tell the audience what America is thinking in the talks process. I also snorted in contempt when Saul’s opening gambit was to tell us what the Taliban were eating tonight. So they had an authentic reporter’s snort to nonsense spun by an official. One other authentic touch was that I was wearing my own suit, which was made in Kabul.

Reporters “2” and “3” were Ramita Navai, one of the best freelancers on TV in the UK (“Come on Saul. Make some news,”) and Siobhan Darrow, from CNN (“President Warner seems confident enough.”)

We were on set for most of the day, redoing the lines, for less than one minute on screen, as they reset the huge camera onto mini railtracks to do different shots. That gave me the opportunity to tell Mandy that Ramita had a childhood crush on his first big role, Inigo Montoya — he of the famous line “My name is Inigo Montoya. You killed my father. Prepare to die,” in The Princess Bride.

I took the chance to tell Mandy of this obsession, standing next to him while we took what Americans call a “comfort break”. Mandy is as generous, funny and clever off screen as you would hope — which was lucky, since he had no one else to talk to in the long hours of resetting the camera. In the next break, he whispered the line in Ramita’s ear.

We spent the evening in Rick’s Café, this being Casablanca. Of course there never was a “Rick’s” — it was a Hollywood set. But this “Rick’s” was opened some twenty years ago by an American journalist who moved to the city and thought it needed one. The piano plays As Time Goes By at 9pm every night, while Chinese tourists take pictures of their food. So reporters playing reporters had dinner in a bar set up by a reporter that was itself a fake.

It’s very easy to knock Homeland. Sure, there are no palm trees in Kabul, and the quality of the dual carriageway along the North African coast where they filmed a night scene is far better than the road to Ghazni. And even the most ardent admirers think Brody was kept alive for an unrealistically long time, and the middle series were nothing like as good as the first two.

But it came good in Russia in series seven, and while I saw only the script for my episode, series eight on the Taliban is looking good so far. There have been few good creative works that have come out of the post-9/11 conflicts — nothing like the outpouring from Vietnam. Perhaps it is all still too close. But just as the first two series said something to post-Bush America about the moral swamp of Iraq, perhaps this will re-engage the US audience with the Afghan war, which is not yet over and could still end in disaster.

As I write, we are halfway through the first agreed pause in hostilities since the fall of the Taliban in 2001. If it lasts a week, the US will sign a deal with the Taliban to withdraw. So far the signs are good, and the relief in the country is palpable. Final withdrawal is conditional on a more lasting ceasefire, and the Taliban talking directly to the Afghan government.

America is the guarantor of a peace process that could take some time to come to fruition, and will need to keep its nerve if this is to work. Having a population that has at least considered a fictional version of the peace process through the eyes of Saul and Carrie means they may be more willing to give peace the time it needs.