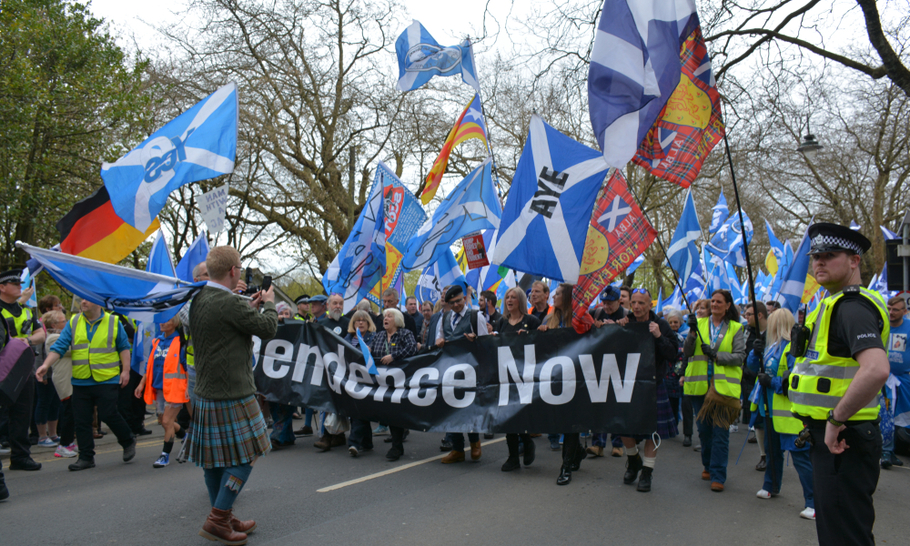 The English-speaking nations on both sides of the Atlantic are disunited. Great swathes of voters feel disenfranchised, alienated from each other and their leaders. A political culture held up as a paragon of the democratic ideal is creaking at the seams.

Democracy has to change if it is to be saved. The reasons for the decline are complex and varied: changing demographics; globalisation; inequality among many others.

Four, long bumpy years of Donald Trump in the White House have left America badly shaken. Pretending that Joe Biden’s victory is proof that the system works, and all will now be well, is wishful thinking.

On this side of the pond Brexit has cleaved Britain in half, leaving a gaping wound that will take a generation to heal and threatens the integrity of the Union. Pretending that this has settled the issue is equally short-sighted.

The US has escaped by the skin of its teeth. Liberal democracies and those who favour the rule of law can breathe a little easier. The degenerate Trump presidency will end. Biden will be sworn in as the 46th President of the US with the first female, African-American Vice President at his side.

This breathing space gives America a chance to begin the slow haul back to decency, reason and dependability. But we should take nothing for granted.

If the storming of the Capitol was intended to wrest control of the US government it was as inept as it was deplorable. That it failed was no thanks to those who watch over America. It was a shocking failure of intelligence – to say the least – by the FBI and the Department of Homeland security. But this insurrection is not over, not by a long chalk.

The insurgents who stormed the inner sanctum of American democracy, like an angry host seeking retribution for an America they feel has been stolen from them, were small in number. But their roots run deep and broad. They are merely the outliers. Their full-throated rage and aggrieved sense of patriotism – about who they are and what real Americans stands for – is shared to varying degrees by millions of their compatriots.

Perhaps more astonishing than the painted shaman in his buffalo head-dress storming the Capitol, was the mumsy, middle-aged figure from North Carolina who quietly intoned she had joined in the revolution” to protect freedom and democracy.

When things get really fractious in America the itch to rebel against or even secede from the Union becomes overwhelming. Talk of a second civil war and secession has been fuelled by Trump and his Alt-right acolytes whose idea of change is to blow things up without much idea about what to put in its place.

But Trump is not the cause. He did not light the fire. He is merely an accelerator that encourages the urge towards American disintegration that lies dormant until it resurfaces.

The desire to secede is as old and American as apple pie. Last December, shortly after the Supreme Court rejected Texas’s demand that Biden’s win in four key states should be overturned, the Lone Star state’s Republican Party chairman issued a furious statement. Perhaps,” he said, “law-abiding states should bond together and form a union of states that will abide by the constitution.”

America is not on the verge of break-up. The benefits of togetherness are too great. But it is deeply divided. Perhaps irrevocably so.

It would be surprising if we did not see the rise of a new, Trumpist party that gives voice to the alienation felt by many, and perhaps more episodes like the storming of the Capitol.

Secession is a powerful idea not confined to the US, as Brexit and the rise of Scottish nationalism demonstrate. Storming out of a relationship that isn’t working is what human beings do. Language becomes so poisonous that understanding and accommodation no longer seem possible. As it is with individuals, so it becomes with collectives.

Judges who hand down decisions we don’t like become enemies of the people”. Political opponents are no longer adversaries. They are traitors. We don’t just disagree with them. We loathe them. Britain feels inhibited in the European Union, so it leaves. Brussels is the enemy”.

The Scots feel under-appreciated, so the campaign for independence ratchets up. Liberalism is a socialist conspiracy intended to impose its beliefs on others. The 24-hour news cycle, Twitter, Facebook, Parler amplify this inchoate rage.

Perhaps the most entrenched fault line in America is race. Movements like Black Lives Matter challenge not only endemic racism, but also the self-image of those who regard the assertion as a slur on America, their America. The same doctrine of states’ rights that protected segregation back then is held up as a justification for white supremacy today.

In his magisterial Letter from a Birmingham Jail written on April 16, 1963, the black civil rights leader, Martin Luther King, speaks powerfully of man’s inescapable network of mutuality”. We are,” he tells the warring factions of the movement, tied in a single garment of destiny. Whatever affects one directly, affects all indirectly…Anyone who lives inside the United States can never be considered an outsider anywhere within its bounds.” Yet this message still only resonates with half of Americans.

King was the leader of a prolonged and disruptive civil disobedience movement with a specific goal. But his words have a deep relevance today. We have made a world where the collapse of trust, as I have argued, has become contagious. This is not helped by a political culture which discourages plurality.

In Britain, the last time a British government was elected with more than 50 per cent of the popular vote was 1931 (the Tory-dominated National Government led by Ramsay MacDonald). Hillary Clinton won the popular vote in 2016 by some margin, but lost the Electoral College. Political engagement in the US and Britain is low compared to Germany or France. I don’t do politics” is becoming a familiar mantra on the doorstep.

The US already has a highly participative political system. President-elect Biden’s challenge is to find themes around which enough Americans can unite. Britain, on the other hand, is starved of ways in which the citizen can exercise real sovereignty. After all, isn’t that the true definition of democracy?

It isn’t that there’s not enough politics. Arguably there’s too much. But it’s the wrong sort, in the wrong place and in the hands of too few people.

The sidelining of parliamentary select committees, emasculating of local government, slapping down of civil servants, the rise of the SPAD and the corporate lobbyist and, recently, packing the unelected second chamber with cronies are all symptoms of a deep malaise.

Relying on a top-heavy, party political system to achieve economic stability, social progress and smooth transitions of power is like hoping that a 19th-century steam engine can carry you as far and as fast as a bullet train.

Vesting power in a handful of people at the centre, chosen in turn by a tiny minority from just one of two or three political parties, seems faintly absurd in the 21st century. When public debate is so democratic it seems odd that democracy itself is not.

The pandemic has shown us, if we didn’t know already, that local solutions are often the best way to solve local issues. The centre must now find ways of sharing power. Constitutional reform and a new compact between the citizen and the state are the prerequisites.