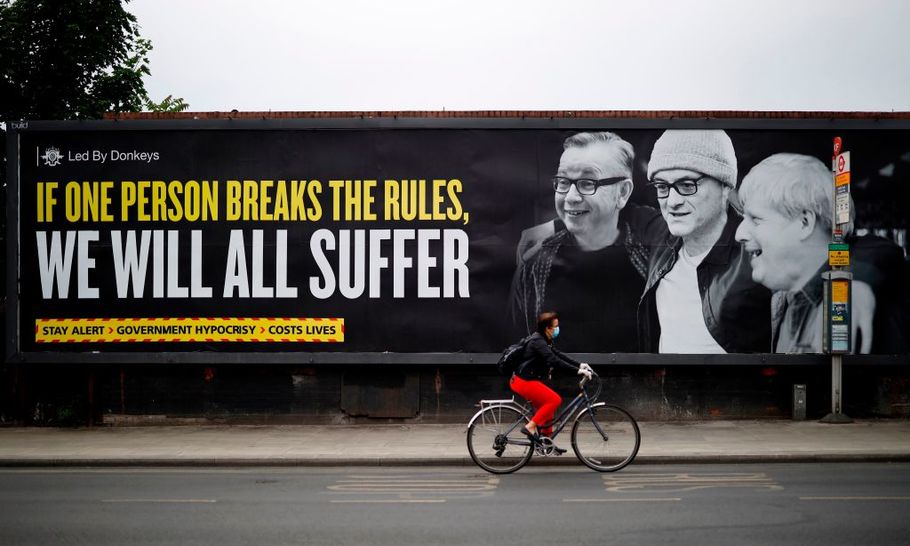 Well, who would have thought it, that a government headed by Boris Johnson, and dominated by Michael Gove and Dominic Cummings, might have a problem with “leaks”?

Johnson — who made his name as a lying journalist, and used it as a platform to become a lying politician, and thanks to his doing so in the post-truth, post-shame world of Trump and Putin, rose to fulfil his dream of sitting in Winston Churchill’s chair.

Gove — the “sources close to” Gove would be tax exiles if they were paid by the word, given how often “Michael’s thinking” is trotted out in the Murdoch press for which he used to work as a journalist. Some inside Murdoch’s empire have taken to calling him “Rupert’s SPAD”.

And Cummings — the author of very long and unreadable blogs who likes to be known as a super-forecaster, but who in an earlier journalistic incarnation was in charge of the Spectator’s website and published a cartoon depicting the Prophet Muhammed with a bomb in his turban. Cummings has always been keen on blowing things up, and sadly the thing he is currently helping to blow up is the United Kingdom.

The latest leak was of details of a meeting on Friday at which Johnson, Gove, the Chancellor Rishi Sunak and Health Secretary Matt Hancock discussed steps towards a second nationwide lockdown. This provoked “fury”. Not the lockdown, but the leak. We know this because Cummings and his acolytes in the Number 10 media operation told their media contacts — Johnson is furious. Downing Street is furious. The Cabinet is furious. The whole damned government is furious. There was so much fury, anyone would have thought something really really serious had happened, like 50,000 Brits had died, or £13 billion quid had been wasted on a track and trace system that didn’t work, or companies were getting massive Covid contracts, not because they were qualified to do the job, but because they were friends of Boris, Michael, Dom, or because they had shoved shedloads into the coffers of Vote Leave and/or the Tory Party.

No, all of that and more seems to leave the government unmoved. Fury, what fury? But someone letting the public know that their lives might be about to be put on hold through a leak? This was beyond the pale. Leak inquiries all round.

Alex Wickham of the Politico website was among those briefed about the fury, and he could not resist putting a rolling eye-ball emoji at the end of his tweet: “Told Boris Johnson is furious that details of the imminent lockdown were leaked from yesterday’s meeting to Sky/Times/Mail, and has ordered a leak inquiry. No 10 insist they didn’t brief it and that whoever is responsible has damaged trust in the middle of a public health crisis.”

How not to roll your eyes at that one? “Damaged trust in the middle of a public health crisis”? I can think of many more things that have done more damage to trust in recent months, and no prizes for guessing who or what would be top of the list. Let’s hear it one more time for Dominic Cummings and the Barnard Castle eye-test road trip.

It would be unfair to put all the blame on Cummings, however. The real culprits are Johnson and Gove, who are so beholden to “Dom” that they could not see the damage he was doing to them, to the government messaging, and to their handling of the crisis, which was bad enough already.

Johnson has damaged trust almost every time he has opened his mouth. Go back to the start, when he was telling us not to worry about going to Cheltenham or the football, not to bother with a mask — they make it worse, don’t you know! He channelled his inner Churchill in saying there had to be one country that would not sacrifice its economy to the pandemic, so let it be Britain. The net result of his underplaying and over-promising, followed by relentless under delivery, was one of the highest death tolls and worst economic outlooks on the planet, even before Brexit is taken into account.

Incompetence erodes trust. Broken promises erode trust. Moving the goalposts erodes trust. His pathetic performances in Parliament have eroded trust — not taking questions and criticisms seriously, not taking Parliament seriously. What was it a “senior government source” said from the JohnsonGoveCummings abuse factory, in a cut-and-paste text sent to Laura Kuenssberg, Robert Peston, Beth Rigby, Tom Newton-Dunn, Harry Cole and more when Keir Starmer called for a two-week circuit breaker? “Keir Starmer is a shameless opportunist playing political games in the middle of a global pandemic.”

Oh yeah? And I wonder what might have happened if they had actually bothered to listen to what he was saying. Too late now, Genius Dom.

The real reason for the fury over the leak about the meeting was that Johnson and Co were still to decide how they intended to label the lockdown without it being called a lockdown. They certainly can’t call it a circuit breaker, because that was Starmer’s term. And they can’t say lockdown, because they have all been saying there won’t be another one.

They need a new name for a lockdown. And they need to test it with focus groups before they can be sure what they can get away with. And they need a new advertising campaign, like the one currently running on Brexit, which keeps telling us the rules are changing in January, but can’t tell us what rules they are talking about and they can’t tell us what they will change to.

I am made furious every time I see those ads, as I think of all that public money being spaffed up a wall to cover up their venality and incompetence. I am furious that a government that had two central challenges — deliver the oven-ready deal and manage the pandemic — has failed spectacularly on both, cost the public purse a fortune, and ruined lives and livelihoods.

They have so eroded trust that I doubt many will believe their denial that the leak came from inside Number 10. It may well just be a way of giving Johnson a line to cling to when he stands up in the Commons and the Speaker expresses his anger that yet again the media was told what was happening ahead of Parliament. “I’m furious, Mr Speaker, I have ordered a leak inquiry.” I hope Lindsay Hoyle is practising his eyerolls.

I’m afraid this is what happens when you put journalists pretending to be politicians in charge of a government.

And remember this too — such is the moral perversion of this government that tens of thousands are dead, tens of billions have been wasted, tons of lies told. That seems to be fine. They can live with all that. But look at the eruption of fury when someone tells the truth about what they might be planning for the people who, sadly, elected them.