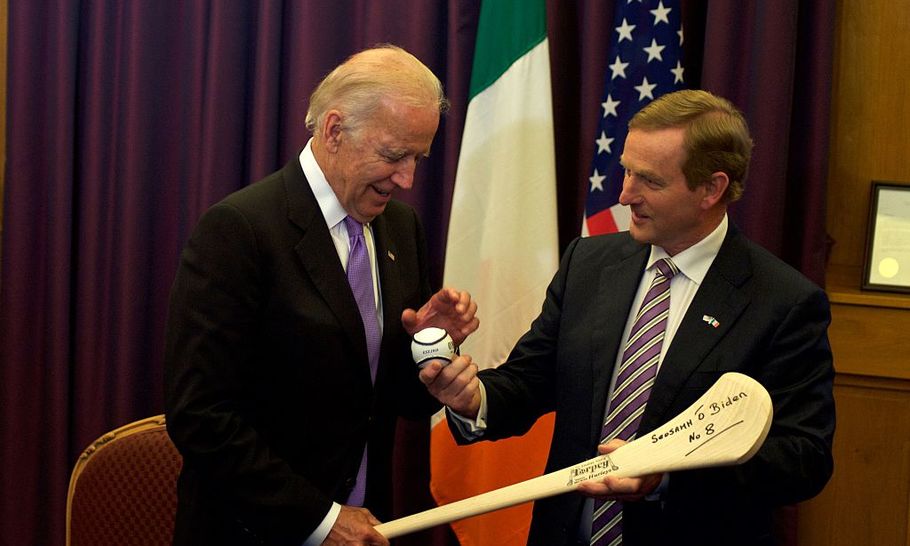 If the opinion polls are even nearly correct in their predictions for the general election on November 3, Joe Biden is still on track to become the 46th President of the United States. Other than denouncing Donald Trump’s record, Biden has been short on detail. So far, we know remarkably little about the direction of his foreign policy, although his record as Vice President under Obama offers a few clues. But what has emerged this week gives cause for concern on two issues that ought to concern many people in Britain: Ireland and Israel.

Following Trump’s example of announcing policy on Twitter, Biden fired a shot across Boris Johnson’s bows by warning him that a trade agreement with the US was incompatible with his Brexit negotiation strategy. He has sided with the EU by claiming that peace on the island of Ireland was at risk from the UK Internal Market Bill, which provides powers to override the Withdrawal Agreement in order to prevent trade barriers in the Irish Sea.

“We can’t allow the Good Friday Agreement that brought peace to Northern Ireland to become a casualty of Brexit,” he tweeted. “Any trade deal between the US and UK must be contingent upon respect for the Agreement and preventing the return of a hard border. Period.”

Biden’s tough line follows a letter to the Prime Minister from a group of Congressional Democrats, making the same threat in more detail. The Irish American lobby in Washington has evidently been reactivated by the row between London and Brussels. But Biden doesn’t need to be lobbied by Dublin, or even by Democratic Congressman like Pete King, who once supported the Irish Republican fundraising organisation Noraid and described the IRA as “the legitimate voice of occupied Ireland”.

For Biden is himself part of the Irish American lobby. “The Irish cause is in his veins,” a former aide, Shailagh Murray, told the New York Times. One of two great-grandfathers of Irish descent was the Pennsylvanian politician Edward Francis Blewitt, whom he described as “an engineer with a poet’s heart”. Blewitt is not the only Irishman in Biden’s poetic pantheon. He often cites Yeats and in his acceptance speech for the Democratic nomination last month, he quoted lines by Seamus Heaney, adding: “This is our moment to make hope and history rhyme.” Biden’s cultural and political hinterland is suffused with Irish nationalism. In any Anglo-Irish dispute, he will instinctively take the Irish side. No doubt he will have made this clear to Dominic Raab when he met the Foreign Secretary this week.

What that means for Boris Johnson is that unless agreement with the EU across the board has been reached by the end of the transition period in December, a newly inaugurated President Biden would make common cause with Dublin and Brussels. The British could forget about a trade deal with the US and would find that the “Special Relationship” had turned specially sour.

Critics of the Internal Market Bill will argue that this is too high a price to pay for the sake of preserving the economic integrity of the UK. The Prime Minister accepted an invisible border in the Irish Sea when he signed the Withdrawal Agreement last year. But the EU is now using the threat of impeding the UK internal market to extract concessions on other issues. In TheArticle Owen Polley has explained here and here that the Good Friday Agreement is not actually threatened by the UK Internal Market Bill, but rather by the EU’s insistence on turning a blind eye to the agreement’s cardinal principle of consent. On this issue, however, Biden is deaf to any voices except those of hardline Irish Republicans and their American allies.

The Democratic candidate is similarly inflexible on another neuralgic issue, the Middle East. This week he spoke at a virtual campaign event to mark the Jewish New Year. Biden said that he “had not planned on running” for President until seeing the white supremacist rally at Charlottesville in 2017 made him realise that these racists were “chanting the same anti-Semitic bile that was heard in the streets of Germany in the 1930s.” He was appalled by Trump’s remark that there were “very fine people on both sides” in Charlottesville. Biden told his mainly Jewish audience that this is a President “who appeals to the dark side of us”.

No doubt Biden is sincere in his hatred of anti-Semitism and his promise to be “a steadfast ally of Israel”. But he does not seem to have noticed that Israel and the Middle East have moved on since he was Vice President — and one of the main reasons for this is the man he hopes to evict from the White House.

Trump has transformed the American relationship with Israel in ways that are unprecedented since Harry Truman became the first world leader to recognise the Jewish state within 11 minutes of its declaration of independence in 1948. Under Trump, the US has recognised Jerusalem as Israel’s capital, as well as the annexation of the strategically vital Golan Heights. He has consistently supported Israel at the UN, even when America’s European allies refused to do so. He has ignored the Palestinian veto on the so-called Middle East peace process, by refusing to make a two state solution the sole criterion of progress.

Now Trump has brokered the first peace treaty between Israel and the Arabs for a quarter of a century, by persuading two Gulf states to recognise as a Jewish state what has hitherto been rejected across the Islamic world as a mere “Zionist entity”. Such a diplomatic breakthrough would normally be more than enough to earn an American President at least a share of the Nobel Peace Prize. Barack Obama was made a Nobel laureate merely for becoming the first black American President. Needless to say, Trump is unlikely to receive the same accolades. Only in Israel is he seen as the man who has broken the logjam in the Middle East, where the balance of power has irreversibly shifted. The Gulf Arabs now see cultivating close ties with Israel as their insurance policy against irredentist Iran and Islamist terrorism.

Biden appears to be oblivious of all this, stuck in a previous era when it was sufficient for a Democratic presidential candidate to denounce the Nazis and utter bromides about peace in the Middle East in order to secure the Jewish vote. Not any more. He will have to say whether he supports the measures Trump has taken. And he will need to show that he understands and appreciates Israel’s new role in the region. There is no sign yet of either.

Whether on Israel or Ireland, Biden seems to belong to the past. At 77, he is too old a dog to learn new tricks. On many other matters, from free trade to Nato, the world needs better US leadership than Trump has been able or willing to offer. But Biden has shown little evidence of new thinking in his foreign policy. The rest of us must beware lest a Democratic victory in six weeks’ time, to which so many are eagerly looking forward, should prove to be a false dawn.