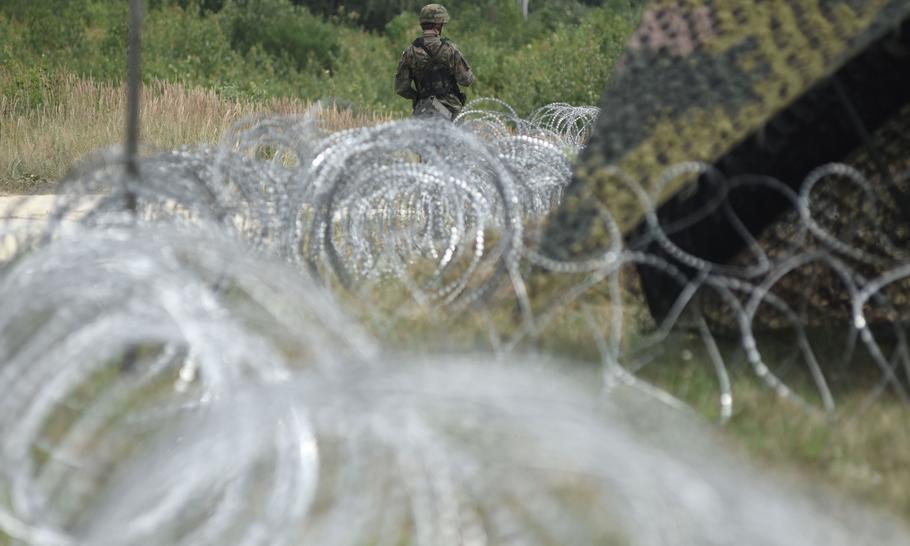 Across the eastern marches of Europe, confusion reigns. Even before a unit of 140 Royal Engineers could be deployed in Poland to help rebuild fences and other infrastructure, it appears that Belarus has pulled thousands of migrants back from the border. Just days ago, Europe shuddered at images of what seemed to be turning into pitched battles, with Polish police and troops using water cannon on asylum-seekers attempting to breach the frontier with wire-cutters. Now, abruptly, border anxiety has abated — for the moment. Will this respite endure? Or is it the calm before the storm?

What has happened? Perhaps the most significant development was that Angela Merkel picked up the phone — twice — to Alexander Lukashenko. The mere fact that the German Chancellor is now talking to the Belarusian President represents a diplomatic triumph for the latter. In August 2020, Lukashenko’s legitimacy was reduced to nothing when he stole the election and, propped up by his patron Vladimir Putin, toughed out the mass protests that followed. Having come so close to being deposed, “Europe’s last dictator” has taken no chances: he has been brutalising the opposition ever since, pursuing its leaders in exile and using military jets to divert an airliner to Minsk so that he could arrest a journalist who had satirised him.

So it cannot have been pleasant for Mrs Merkel, obliged to postpone her retirement as Chancellor months after Germany’s election while a new coalition takes shape in Berlin, to negotiate with the brute of Belarus. However, the border crisis has left her with no choice. The woman who is proud of her record as a champion of migrants, human rights and democracy is now, in her caretaker role, obliged to give priority to the EU ’ s eastern perimeter, now facing the prospect of a new wave of uncontrolled immigration as large or larger than in 2015.

Yesterday the Polish Prime Minister, Mateusz Morawiecki, chose Germany’s biggest tabloid, Bild, to fire a shot across Berlin’s bows. “By defending the Polish border, we defend the whole of Europe. We Poles are determined to protect our border by all means, which is also the eastern border of the EU and Nato.” He warned that unless Belarus got the message that the migrants shall not pass, “millions” more would flood into Western Europe.

Morawiecki and his government are suspicious of the Germans and uncomfortable about negotiations being carried out between Mrs Merkel and Lukashenko or Putin over their heads. The memory of the Ribbentrop-Molotov Pact, which wiped Poland off the map, is still vivid in Warsaw. But Poles have to accept that in this stand-off, vital German interests are also at stake. These include not only asylum and security, but also energy supplies.

Last week Lukashenko threatened to interrupt Russian gas pipelines that pass through Belarus to Poland, if the EU were to step up sanctions against him. That threat seems to have had an impact, although Moscow cannot have been pleased to have its reliability called into doubt at a sensitive time when the hugely expensive and controversial new Nordstream II pipeline under the Baltic still awaits regulatory approval in Berlin and Brussels. This unpredictability is a reminder that Lukashenko is to Putin what Kim Jong-un is to Xi Jinping: a client but not a puppet.

We do not know precisely what Mrs Merkel may have promised Lukashenko in return for de-escalating the border crisis. He may have hoped to be paid off in hard cash, like the Turkish strongman Erdogan, but Mrs Merkel does not have the authority to promise danegeld on behalf of the EU. More likely, he has been reassured, implicitly at least, that Europe will turn a blind eye to his defiance of democratic norms and domestic repression.

Meanwhile, further to the south-east, Ukraine is bracing itself for a new challenge. Kyiv is now prepared for Putin’s hybrid warfare that resulted in the annexation of Crimea and the de facto secession of the Donbas region. But the regular forces now stationed along the Russian-Ukrainian border are even more formidable. This military buildup places the peace of Europe and potentially of the whole world in peril.

Ukraine may not be a member of Nato, but the US and the UK are both signatories to the 1994 Budapest Memorandum, whereby Russia gave assurances on the territorial integrity and political independence of Ukraine in return for the latter handing over its nuclear weapons. At the time, Ukraine had the world’s third largest nuclear stockpile. If Kyiv still had a nuclear arsenal, the Kremlin would not now dare to risk a confrontation. Although the Budapest Memorandum does not have the status of a treaty, the Americans and British have a prima facie legal obligation to protect Ukraine. Putin is counting on our moral cowardice.

It seems incredible that, after so much bloodshed there during the last century, the eastern marches of Europe are once again so unstable. But it has been thus throughout medieval and modern history. The very name “Ukraine” comes from the Slavic word ukraina, meaning “borderlands”. We were reminded this week of a past epoch, when the Polish-Lithuanian Commonwealth ruled over vast tracts of Eastern Europe. The Tartar community that survives on both sides of the Polish-Belarusian border originally settled there as warriors, rewarded with land by the Polish kings in return for defending their border against incursions from Muscovy or others. Now, however, the Polish Tartars have been burying unknown migrants from the Middle East, found dead in the woods, in the only Muslim graveyards in the region. These solitary graves mark a sad new chapter.

Thus does history come full circle in an inhospitable land. We can only hope and pray that the chaos fuelled by border anxiety does not spill over from Eastern Europe to the rest of the Continent. Seldom has there been a greater need for wisdom and restraint all sides — and seldom has statesmanship been in such short supply.