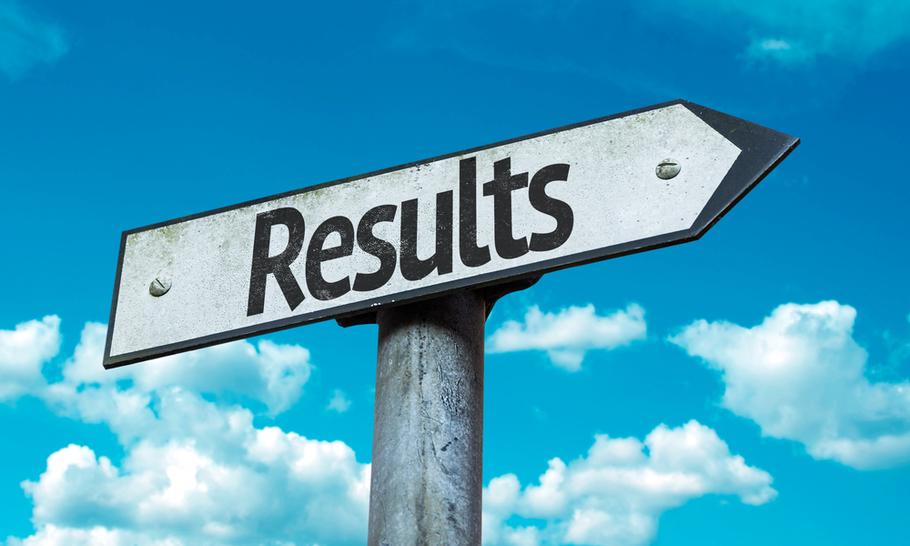 Last week I discussed the ways in which the Tory lead might slip to the point where we end up with a hung parliament. The opposite possibility also exists: a Conservative landslide.

If that is where we end up, it will, more than anything, reflect a huge structural change in the way millions of people decide how to vote.

Here is the evidence. I have combed through YouGov’s archives to unearth the data in the following table. It contains some of the most startling polling numbers I have ever seen. Simply put, Brexit has completely transformed Britain’s political landscape, by prompting millions of voters to rethink their politics and their party loyalties.

Start with the way Conservative support has evolved. Its share of those who voted Leave in the Brexit referendum has almost doubled since the 2015 election, from 38 to 73 per cent. In contrast, its share of the Remain vote has almost halved, from 27 to 16 per cent.

Labour’s support has moved in the opposite direction, though not as dramatically. It gained among both groups in 2017, though more among Remainers (up 17 percentage points) than Leavers (up eight points). Since 2017, Labour has lost ground among both groups. Jeremy Corbyn says Labour’s policy is intended to bring the country together. In a way he has succeeded: his stance is alienating both Remainers and Leavers to broadly the same extent.

Finally, the Lib Dems, who stayed flat on their electoral back in 2017 in all bar a handful of constituencies, have seen big gains since then among Remainers alone. 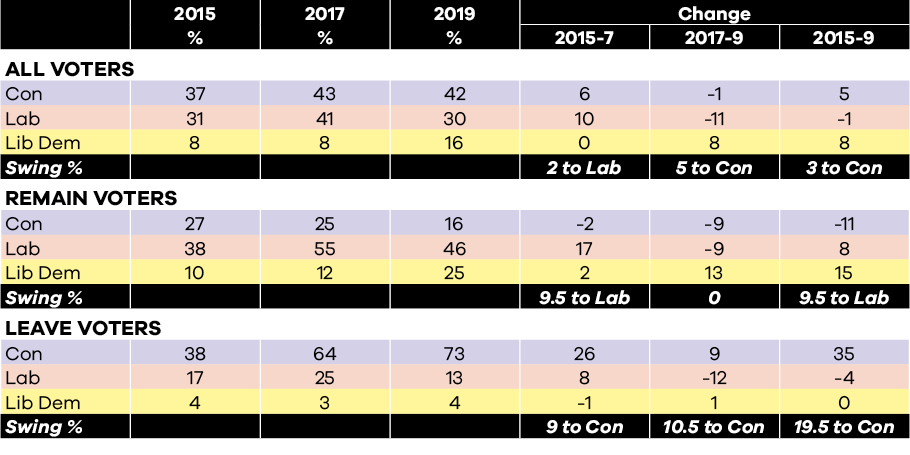 Cumulatively, then there has been a swing of almost 10 per cent from Conservative to Labour among Remain voters since 2015 — and a swing of almost 20 per cent to the Tories among Leave voters. Both are extraordinary figures in themselves; the contrast — a 29 per cent difference in swing between the two groups — represents an electoral earthquake. In eight decades of polling, nothing remotely like this has ever happened between any two general elections, let alone two held less than five years apart.

Why, though, might these numbers prefigure a big Conservative victory? The 2017 election famously set in train these opposite trends and destroyed Theresa May’s majority — Labour capturing Remain seats such as Kensington and Canterbury for the first time, while the Tories gained a handful of traditional Labour seats in Leave areas such as Mansfield and Walsall North.

Since then there has been no net shift among Remain voters: both Labour and Conservative support is down nine points. But Leave voters have continued to shift to the Conservatives in large numbers. This matters because most Labour marginals voted Leave in 2016. It is here that the potential epicentre of the electoral earthquake is likely to be found.

Taking account of the figures in the table above, I reckon that current voting intentions could result in swings of around 8 per cent to the Conservatives in Leave seats defended by Labour. Overall the Tories would capture 71 Labour seats if they achieved such a swing everywhere. However, 15 of these seats voted Remain. That leaves 56 Labour marginals that voted Leave.

If we assume the Tories lose around 20 seats to the SNP and Liberal Democrats (without tactical voting, their losses may be fewer), and gains 56 seats from Labour, then Boris Johnson ends up with a majority of 65 (assuming Sinn Fein MPs stay away from Parliament).

It would not take much for the Tories to do significantly better than that. Labour has 90 seats vulnerable to a ten per cent swing. Of these, 70 voted Leave. If the Conservatives gain all these, their majority approaches 100.

Statistics are one thing: places and people another. The scenario outlined above implies that the Tories will overrun such Labour citadels as Bolsover and Sedgefield. Is it really plausible that the Conservatives will unseat Dennis Skinner and capture the seat once held by Tony Blair? Surely the Tories are anathema in places like these?

No longer. The Tory vote last time jumped by almost 5,000 in Sedgefield and more than 8,000 in Bolsover. YouGov’s data indicates that it will rise once again in both seats, along with many other Labour/Leave seats in the North and Midlands. Even if the Conservative vote stands still in every Labour marginal, the party could still make plenty of gains if, as seems very likely, the Labour vote falls.

Is all this inevitable? By no means. Perhaps the current double-digit Conservative lead will shrink. Perhaps tactical voting will rescue Labour and the Liberal Democrats from catastrophe. Perhaps the Brexit Party will syphon enough Leave votes from the Tories to help Labour retain key marginals.

All in all, a Conservative landslide is not inevitable; but it is certainly possible. After all, when an earthquake strikes, a landslide often follows.