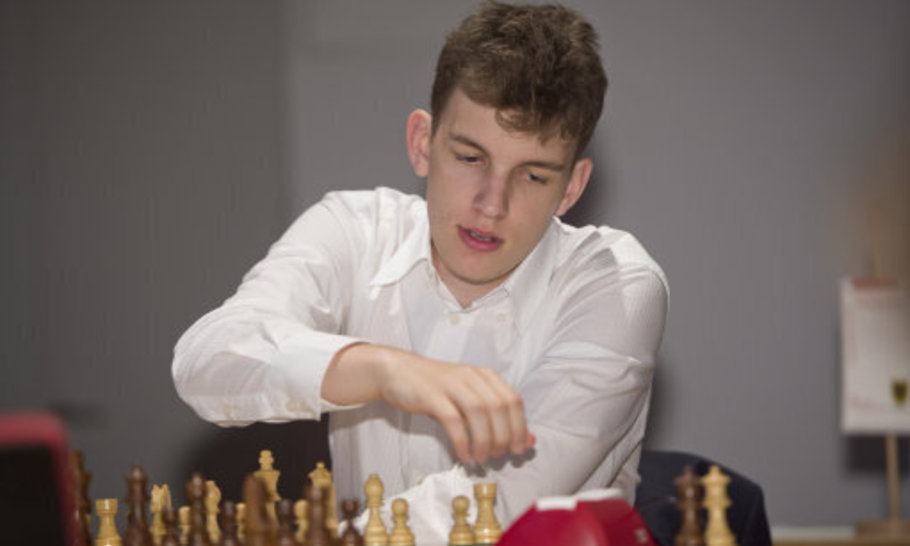 Without a doubt, the towering genius of Polish chess was Akiba Rubinstein (1882-1961) born in Stawiski, Poland (then part of Russia). The youngest of 12 children, his father died shortly before his birth and he was raised by his grandparents, who gave him an orthodox Jewish religious education, in keeping with the family traditions of Talmudic scholarship.

It is remarkable for our age, accustomed to pre-teenage Grandmasters, that the young Akiba had no contact with chess until the age of 18. However, once having learned the game, he devoted himself to it completely, abandoning his religious studies and moving to the city of Łódź (amazingly pronounced “Vooch”) which contained a thriving chess club. This club included among its members the prominent master Georg Salwe, against whom Rubinstein contested no fewer than 39 published games, plus, presumably, a host more practice bouts, which, sadly, have been lost to posterity. Rubinstein improved rapidly as a player and in 1903 played two formal matches against Salwe, drawing the first, with five wins and five losses, but, as an indication of his accelerating grasp of the game, winning the second match with five wins to just three losses.

The following year Rubinstein moved another rung up the ladder, when he came fifth in the Russian national tournament at Kiev (now Kyiv) and soon thereafter made his international debut, sharing first prize with Oldrich Duras, at Barmen 1905. Important successes followed swiftly, including victories at Ostend 1907 (tied with Bernstein), Carlsbad 1907 and Łódź 1907. In 1908 he won matches against the prominent Grandmasters Teichmann, Marshall and Mieses, while in 1909 he reached his perihelion, tying with the world champion, Emanuel  Lasker, for first prize in the St Petersburg tournament , and sensationally defeating  the champion in their individual game. For those playing over the game, note should be taken of the crucial Queen manoeuvre starting with 18 Qc1.

These results left Rubinstein as a leading challenger for the world title, but efforts to arrange a match with Lasker in 1910 proved abortive through lack of financial backing. Rubinstein’s tournament play, though, continued unsurpassed, culminating in 1912 with a series of five successive first prizes in major events. Renewed attempts to obtain a title match with Lasker resulted in a tentative agreement for a match to be played in the spring of 1914. Tragically for Rubinstein, this contest was first postponed and later abandoned, owing to the outbreak of war.

The privations of war did considerable damage to Rubinstein’s delicate psychic balance, and in post-war years he never again reached his former eminence. While he was still capable of producing brilliant individual games, his results as a whole were erratic and sometimes marred by elementary blunders. As Tartakower put it: “His play became keener but his thinking less clear.” Symptoms of a persecution complex gradually became evident – he suffered from imaginary distractions and complained of being followed and threatened by enemies.

In spite of his growing psychological disturbance, he still enjoyed numerous successes: 1st at Vienna 1922, =1st (with Nimzowitsch) at Marienbad 1925; 2nd (after Capablanca) Budapest 1929; 3rd (after Alekhine and Nimzowitsch) San Remo 1930, as well as victories in match-play over Schlechter in 1918 and Bogoljubov in 1920.

As the Swedish Grandmaster, Gideon Stahlberg, wrote in Chess and Chessmasters: “A latent disease of the mind was slowly weakening the titan’s creative powers and sapping his ability to achieve successes. But meanwhile, one could still recognise that he was a great master; his play was almost more subtle than before, and his art more remarkable.”

That perceptive critic, Richard Réti , ascribed Rubinstein ’s problems less to the ravages of war, than to the unusually late age at which Rubinstein learned the moves. “Rubinstein is like an orator speaking not his own but some foreign language, that he has learned late in life, so that in spite of his profound ideas, he cannot always find the most effective word. Capablanca, on the other hand, speaks his native tongue when he plays chess.” Capablanca, in sharp contradistinction to Rubinstein, picked up the moves at the age of four.

Rubinstein retired from serious play in 1932 and, after spending some time in a sanatorium, lived out his remaining years in reduced circumstances in Belgium. He died in 1961 in an old people’s refuge.

The Belgian Grandmaster Count Alberic O Kelly de Galway, Rubinstein’s chessboard student, recounts that during the Nazi occupation of Belgium, Rubinstein, a Jew, sat in the lobby, clad in his greatcoat, awaiting the inevitable arrest. However, when the SS eventually did march up, the Leutnant in charge, recognising the utter futility of dragging off a vacant old man to a concentration camp, abandoned the attempt, and marched his squad away, leaving the distracted grandmaster to his hermetic internal memories of chess  glories past.

Less overtly aggressive than some of his contemporaries, Rubinstein‘s style was marked by profound strategic and positional insight; his particular forte was the endgame. In  Modern Ideas in Chess   Réti wrote: “With Rubinstein all is refined tranquillity; for with him, in building up his game, the position given to every piece is the necessary one. It is not a matter of a fight for him, but the working out of a victory, and so his games create the impression of a great structure, from which not one stone dare be shifted.” But he was also capable of brilliant attacking play when the position demanded, as witnessed by the 1911 game in which Rubinstein inflicts defeat on the near invincible Capablanca , miraculously basing his key calculations on a Queen manoeuvre commencing 17 Qc1, the same move which had baffled Lasker two years beforehand. The odds against this quasi repetition occurring against two such Titans as Lasker and Capablanca must be astronomical.

The Polish team, with Rubinstein at its head, carried off the gold medals in the Chess Olympiad of Hamburg 1930. The other stalwart of the victorious Polish squad was Grandmaster Xavier Tartakower. 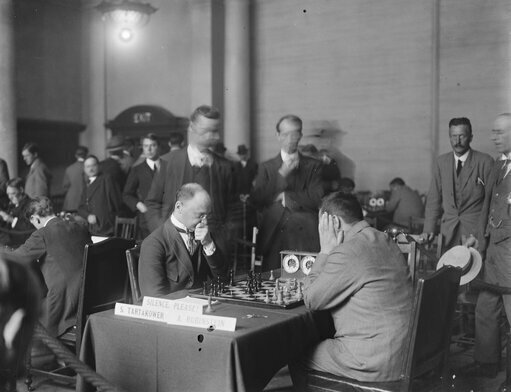 Tartakower was, by birth, a Roman Catholic. However, when the Nazis rose to power, he resolutely allied himself with the Jewish cause and fought against the Nazis in the Second World War, despite having fought for the Austro-Hungarian camp in the First World War. He represented Poland in six Olympiads and must be deemed the second most illustrious Polish Grandmaster, after Rubinstein.

From Poland, Tartakower studied at Geneva, where he matriculated in 1904, thence relocating to Vienna, where he qualified as a doctor in law at Vienna University, using that great chess city as the base for his early playing career.

Tartakower became recognised as a master player when he won the Hauptturnier (Major Tournament) of the Nuremberg Congress in 1906 and, from then on till the outbreak of the Great War, he competed in many tournaments, with a respectable degree of success.

Decorated for valour in the field during the First World War, he resumed intensive tournament and matchplay in 1920, during which year he became a globally recognised figure, winning first prizes at Vienna, London 1927, Liège 1930 (ahead of Sultan Khan, Nimzowitsch and Rubinstein himself) and Jurata 1937, where he left future world title candidates Miguel Najdorf and Gideon Stahlberg in his wake.

By now he was resident in Paris and he remained in France for the rest of his life (except for some of the Second World War years when he fought from exile in the free French army). He eventually became a naturalised French citizen and played for France, rather than Poland, in the 1950 Olympiad at Dubrovnik.

The enforced break in play during the Second World War did not at first seem to affect his form when International chess was resumed. He was first at Hastings 1945/6, first at Venice 1947 and first at Beverwijk 1949.

But now a decline did set in and his results became rapidly worse. Always a gambler, he found himself harder and harder pressed to make sufficient money to cover his losses at the gaming table and this, together with incessant writing work, destroyed any real chance he may have had at maintaining his former grand-masterly results. When he died in Paris in 1956 his circumstances, though not exactly poverty-stricken, were in the nature of hand-to-mouth. As Dolly Levi says in  Hello Dolly   , if you are living hand to mouth, it helps to be ambidextrous, but unfortunately, the ageing Grandmaster’s feats of legendary legerdemain were becoming harder to pull off. Tartakower’s previous magical feats of prestidigitation, as he was nearing the height of his once formidable powers, are seen against Maroczy .

As a grandmaster of enormous gifts, Tartakower dissipated many of them through a reckless passion for experiment and for the bizarre. Had he been content to be less variegated, he could, perhaps, have been world champion. As it was, he undoubtedly equalled the class of a world champion at many points of his career, notably at London 1927 and his great triumphs of Liège 1930 and Jurata 1937, the last of which, as was the case with Petrosian’s great victory at Moscow 1971 seems to have been mysteriously forgotten.

Tartakower has also gone down in chess lore as a great chess writer. His witty epigrams became proverbial: “The mistakes are all there, just waiting to be made”; “only a strong player knows how weakly he plays”; “The player who wins is the one who makes the mistake before the last” and so on. All have the ring of bitter truth. He was also the master of the devastating aphorism, referring, for instance, to the Ruy Lopez opening as “the Spanish Torture”.

Earlier this month a new Polish chess star soared above the horizon, to make a decisive entry into the chess firmament.

Jan-Krzysztof Duda (born 26 April 1998) now continues the tradition of Polish chess greats. A quasi prodigy, he achieved the title of grandmaster in 2013 at the age of 15 years and 21 days. Duda won the Polish Championship in 2018 and also triumphed in the Chess World Cup this year, during the course of which he defeated both the reigning world champion Magnus Carlsen and the former challenger, and previous holder of the youngest ever Grandmaster title , Sergei Karjakin. This week I give the link to Duda’s series of impressive victories from the World Cup .

Raymond Keene’s latest book “Fifty Shades of Ray: Chess in the year of the Coronavirus”, containing some of his best pieces from TheArticle, is now available from  Amazon , and  Blackwell’s .