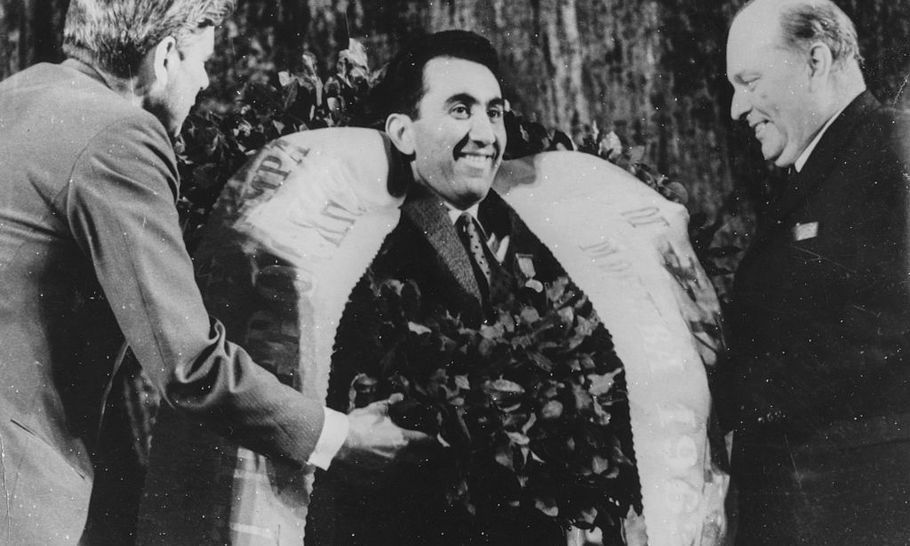 The 24th Congress of the Communist Party of the Union of Soviet Socialist Republics, held in Moscow in 1971, might be said to have condensed into the vapours of time past… all but for one thing, provided that you are interested in chess. For years I have been aware of a quick play game won by Tigran Petrosian against his future successor as World Champion, Anatoly Karpov. I had, though, no concept of the context in which this victory had been achieved. Now, though, chess archivist Douglas Griffin (@dgriffinchess on Twitter) has excavated the source of this forgotten clash of titans, and the answer is truly spectacular. That lone game (and only one other game from it has been preserved) occurred in a hugely powerful fast play competition, assembling almost all of the leading Soviet Grandmasters, held to celebrate that same 24th Party Congress.

This was an extraordinarily powerful test of chessboard skill and speed of reaction, including, as it did, no fewer than three past and future World Champions, one challenger, two further aspirants for the world title (one of whom was Yuri Averbakh), plus a host of leading Soviet Grandmasters.

Petrosian won with the astonishing score of 14.5 out of 15 possible. In the table, 1 represents a win, 0 a loss and ½ a draw. In modern times, such a quick-play (five minutes per player per game) clash of arms would be recorded in full, every game, at whatever time control, followed live and retained by electronic means. Half a century ago, though, such technology was not available and Petrosian’s triumph at Moscow 1971, an Atlantis of the chessboard, has submerged as surely as Plato’s mythical civilisation.

Tigran Petrosian (1929–1984) reigned as World Champion from 1963–1969. Born to Armenian parents in Tbilisi, the capital of Soviet Georgia, Petrosian‘s formative years were dogged by personal misfortune. Both his parents perished during the “Great Patriotic War” against Nazi Germany and at one time the young Petrosian was forced to work as caretaker in a military officers‘ club to maintain what was left of his family. His main consolation was chess, and although his progress in this field was comparatively rapid, it was achieved by stages and exhibited no prodigious or meteoric quality. At this early stage in Petrosian‘s development his most influential chess mentor was Archil Ebralidze, who instilled in him a deep and lasting regard for the play and principles of the great prewar strategists, José Capablanca and Aron Nimzowitsch.

In later years Petrosian was, in fact, to raise the Nimzowitschian theory of prophylaxis to an extreme echelon of sophistication, developing from this his own highly individualistic, pragmatic and flexible style, with a penchant for manoeuvres, which often baffled his opponents.

In 1946 Petrosian won the Armenian Championship and over the next four years he competed regularly in the preliminaries of the USSR Championship. His next important success came in 1951 when he won the Moscow Title and shared second place in the USSR Championship itself. This marked him out as a player of unusual ability and also qualified him for the World Title cycle.

In 1953 Petrosian competed in his first World Championship Qualifying Candidates’ event, taking an honourable fifth prize at Zürich; yet three years later in Amsterdam his share of 3rd to 7th places, in his second appearance at this level, was no real improvement. Throughout the mid-1950s Petrosian‘s results seemed to reach a standstill and he showed few signs of fulfilling the promise of 1951. At a loss to equate Petrosian‘s undoubtedly great talents with his consistent yet colourless play, which involved many short draws, critics began to level accusations of lack of fighting spirit against him.

However, an upward curve gradually became discernible, commencing with his victory in the 26th USSR Championship in 1959 and third place, this time undivided, in the 1959 Candidates’ Tournament (1st was Mikhail Tal; 2nd was Paul Keres). Petrosian‘s great opportunity finally came when he took 1st place in the 1962 Candidates‘ Tournament at Curaçao, scoring 8 wins, 20 draws, and zero losses, a half point ahead of Keres and Efim Geller. This important victory gave him the right to challenge Mikhail Botvinnik for the World Championship.

Petrosian’s victory over Botvinnik in the 1963 World Title match, achieved by the score of 5 wins, 15 draws, and 2 losses, was convincing rather than spectacular, and the overriding impression was that Botvinnik succumbed, not by any innate inferiority in his play, but as a result of the age difference (Petrosian was only 34, while the Champion was 18 years his senior). In many games Petrosian hovered perilously on the brink of defeat and only Botvinnik’s fatigue, combined with his own eel-like defensive ability, contrived to salvage the half points which are shared in a draw. Nevertheless, Petrosian did win one memorable game, the fifth, which demonstrated that the application of pure technique in a simplified position can create a deeply aesthetic effect. Here one can detect the verdict of one of Petrosian’s biographers, the English Master Peter Clarke, who wrote about Petrosian’s “strategical masterpieces of a mysterious vein”.

Petrosian‘s first defence of his World Title came in 1966. Scoring 4 wins, 17 draws, and 3 losses against the rising star Boris Spassky, Petrosian became the first World Champion to win a Title Match outright since Alexander Alekhine’s defeat of Efim Bogoljubov in 1934. Petrosian finally relinquished his Title after a renewed challenge from Spassky in 1969. Maintaining an equal score up to game 17 of the contest, Petrosian collapsed in the final phase of the match, going down by 4 wins, 13 draws, and 6 losses.

During his six year period as World Champion, Petrosian‘s results in important tournaments had been muted; yet, with the burden of the Title cast off, Petrosian no longer felt the depressing obligation to prove himself primus inter pares and his results outside the World Championship cycle began to show a significant improvement. At home Petrosian shared first place with Lev Polugayevsky at the 37th USSR Championship in 1969, winning the play-off with two wins, two draws, and zero losses. Then he took the title outright at the 43rd USSR Championship in 1975. In the Candidates’ Series Petrosian reached the final in 1971, the very year in which he achieved his astonishing domination in the 24th Party Celebration at Moscow. 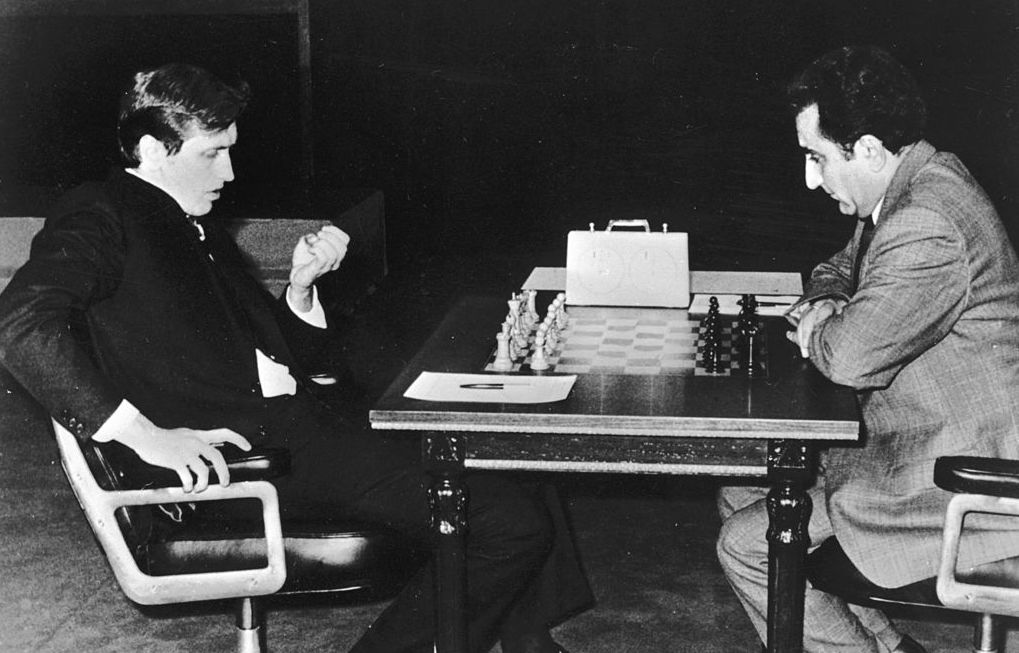 Sadly, Petrosian lost in the Candidates’ final to Bobby Fischer (pictured above). Fischer, of course, was the mercurial American, who went on to defeat Boris Spassky for the World Title, only to retreat into the isolation of a fanatical hermit. He thus achieved, by a feat of insane legerdemain, a transformation from the most globally lauded hero of the chessboard, into the most disappointing and inactive World Champion since the days of Paul Morphy, a century or so before. Rois Fainéants indeed.

In spite of his outstanding record, Petrosian has continually suffered from an unfairly distorted public image. He performed with a remarkable consistency in seven Candidates Events, held the World Title for six years and won the USSR Championship on no fewer than four occasions, so what can be the explanation for this apparent paradox? Possibly the answer is to be sought In his leaning towards a defensive style over the board, aimed more at avoiding loss, rather than playing va banque for a victory. (In football terms, it might be seen as the José Mourinho vs Pep Guardiola of styles). Indeed, in his best years Petrosian achieved a reputation for almost total invincibility. Petrosian’s six-year tenure as World Champion, including one successful title defence and two top board Olympiad individual and team gold medals, puts Bobby Fischer’s incumbency decisively to shame. As Champion, Fischer did not play one serious game, losing the supreme title by default to Anatoly Karpov, without a metaphorical shot being fired. Yet apologists for Fischer, and not least Fischer himself, in an article for Sports Illustrated unreasonably accusing Petrosian of cheating, have coloured the public image of a great and supremely subtle exponent of the game.

As a result of his failure in the 1962 Candidates’ Qualifier Tournament, Fischer asserted in a Sports Illustrated article of 20 August 1962 that three of the five Soviet players (Tigran Petrosian himself, Paul Keres, and Efim Geller) had a pre-arranged agreement to swiftly and painlessly draw their games against each other, with the objective of conserving their energy for their games against Fischer. I believe this accusation to be false and have refuted it in some detail for my book Petrosian vs the Elite.

With Petrosian, undoubtedly one of the greatest players of all time, one yet harbours the suspicion that his talent would have been capable of still further development had it been supported by greater determination to succeed. When he chose to do so, he could exploit his untapped reservoirs of power, as evinced in his Party Piece from Moscow 1971, where, without mercy, he systematically slaughtered many of the world’s best.

This week’s game is between Petrosian and the much younger Karpov in 1971.

An impressive new book is Cyrus Lakdawala’s In the Zone: The Greatest Winning Streaks in Chess History. Although this tome contains exploits by Morphy, Alekhine, Fischer, Kasparov and Carlsen, there is no mention of Petrosian. As a fan of Cyrus’ books, I heartily commend Petrosian’s Party exploits at Moscow 1971 for the second edition.

Raymond Keene’s latest book “Fifty Shades of Ray: Chess in the year of the Coronavirus”, containing some of his best pieces from TheArticle, is now available from  Amazon , and  Blackwell’s .