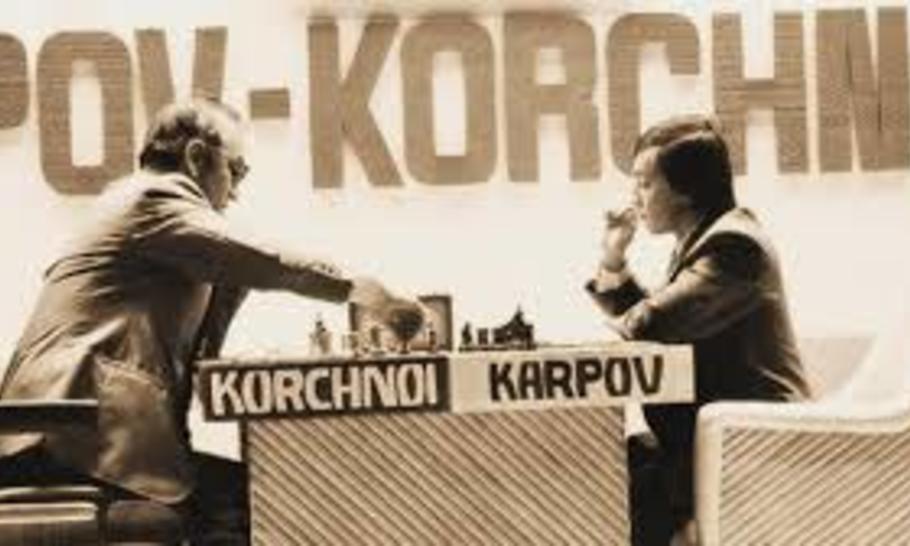 Closing Gambit is a film by Alan Byron which has been airing on the PBS America TV channel for the past two weeks. Also available via Sky, Virgin, Freeview, and doubtless inspired by the runaway global success of the fictitious Netflix miniseries The Queen’s Gambit, PBS schedulers decided to screen a documentary about a real World Chess Championship, the 1978 clash between the Soviet World Champion, Anatoly Karpov, and the Soviet defector Viktor Korchnoi. Karpov eventually won the match by six wins to five with 21 draws, after Korchnoi — along with Rubinstein, Bronstein and Keres, one of the greatest players never to have won the world title — fought back bravely from a most unpromising start.

In far Baguio, where we lay our scene, these two Matadors of the Mind fought out their battle for the World Chess Championship, which, given the nature and political polarity of the two combatants, attained new heights of acrimony, way exceeding the quantum of bitter hostility which usually marked such confrontations. Baguio City is the summer capital of the Philippines and the published Soviet account of the match was titled “I Dalekom Baguio”, hinting perhaps at the origin (from the Russian) of the word “Dalek” in the world of Doctor Who, meaning “alien” or “distant”, much as Anthony Burgess purloined the word Droog (“friend” in Russian) to signify Alex’s bowler-hatted henchmen in A Clockwork Orange.

I had the privilege of being Korchnoi’s Head of Delegation for much of this 1978 marathon, which finally extended to 32 games. Much of my time was spent negotiating with the Soviets, led by the formidable KGB Colonel and former military prosecutor, Viktor Davidovich Baturinsky, a prominent member of a colourful cast of characters involved in the contest. One joke popular at the time was that the KGB always went around in threes: one who could read, one who could write and a third to keep a watchful eye on the two intellectuals. In Karpov’s case, though, the entourage amounted to no fewer than 20 accompanying persons. Clearly this amounted to more than a couple of “intellectuals“ and a minder.

The various casus belli included the auditorium seating of the alleged ray- beaming Soviet parapsychologist, Dr Vladimir Zukhar, the X-raying of Korchnoi’s custom built chair and the controversy surrounding Korchnoi’s own entourage of orange-clad Ananda Marga gurus, who turned out to be on bail for the attempted assassination of an Indian diplomat. By a considerable margin, though, the world’s media was most fascinated by the great yoghurt gambit.

During the drawn second game, a yoghurt was delivered to Karpov. After the conclusion of hostilities Petra Leeuwerik, Korchnoi’s colourful and volatile confidante — herself a former prisoner of the USSR concentration camp in Vorkuta — came to me and said: “We must protest!” At first I thought she was joking, but she was, in fact, deadly serious.  So, when an identical yoghurt was delivered to Karpov in game three, the audience burst out laughing – for by now The Great Yoghurt Controversy, for which the match may be remembered long after the chess has been forgotten, was in full swing. Mme Leeuwerik had been incarcerated for attempting to blow up a train, so we were not unaccustomed to expressions of extreme opinions from her.

After the second game the Korchnoi camp issued a formal protest claiming that the delivery of a yoghurt could convey a kind of coded message. Thus a yoghurt after move 20 could signify “we instruct you to offer a draw”; or a sliced mango could mean “we order you to decline a draw”. A dish of marinated quail eggs could mean “play Nb5 at once” and so on. The possibilities are limitless.

Predictably only Baturinsky and Mme Leeuwerik appeared to take the protest seriously, but their intransigence was sufficient to blow the dispute up out of all proportion. After a lengthy meeting of the match appeals committee had failed to solve the problem, Lothar Schmid, the German chief arbiter, finally saved the day by decreeing that Karpov could have his yoghurt, provided that he consumed only the violet-coloured variety, served at a fixed time by a designated waiter.

The Great Yoghurt Controversy gave the press a field day. On-the-spot reporter Ian Ward must have enjoyed himself when commenting in the Daily Telegraph on the compromise: “But will the yoghurt crisis now really subside? Herr Schmid is the first to admit the tenuousness of the situation. He fully realises that yoghurt can come in many colours – green, blue, pink, yellow, to name but a few. Under the Schmid ruling a change in the colour of the yoghurt passed to Karpov would throw the whole compromise into confusion: for then the Russians must seek official permission once again.”

The Schmid ultimatum continued: “If it is a violet yoghurt again no mention need to be made in advance to me or to the deputy arbiters. In case Mr Karpov wishes to change beverages, please let an arbiter to know in advance of the game by describing the new beverage in a short note.” German humour is, of course, no laughing matter, and Herr Schmid’s deadpan Judgement of Solomon was universally admired. Ward concluded: “In this rarefied atmosphere that only chess grandmasters appear to comprehend fully, it appears that there might be serious complications if Herr Schmid is asked to distinguish between, say, mauve and violet yoghurt. The implications remain frightening.”

I had been dealing with the Soviets at close quarters ever since 1974, when I attended the first match between Korchnoi and Karpov in Moscow, while both participants were still, in theory, reliable sons of Lenin. This was the encounter which ultimately decided the world title in Karpov’s favour, when Bobby Fischer decided to default rather than defend it. I was in Moscow to gain first hand information for my book on the match, and it may well be that I was in Moscow at the same time as Laszlo Solymar (who recently wrote an excellent piece for TheArticle ‘When life was simple: A trip to Moscow, circa 1974’. I also failed to buy a chess set in the GUM department store, but came away instead with a mock crocodile leather briefcase.

Korchnoi complained that the leading Soviet Grandmasters deserted him during his match against Karpov, one reason for his defection in 1976. I, however, suffered no such political qualms and freely offered my advice while I was in Moscow. In fact Korchnoi used one of my ideas to destroy Karpov in record time in game 21 of the match, a game which can be found at the close of this column. Presumably it weighed heavily in Korchnoi’s decision to invite me to assist him in his World Title campaign three years later.

My trip to Moscow may have proved fruitless in terms of acquiring a chess set, but, like Laszlo Solymar, I did succeed in negotiating a substantial rouble payment for the Russian translation of my book on Nimzowitsch, the author of  classics of chess strategy. I also encountered Soviet humour, largely stemming from the “spherical” (as Nigel Short’s described him) Soviet Grandmaster, Eduard (“Eddie”) Gufeld — a kind of Russian Falstaff, not only witty in himself but the cause that wit is in others.

A few of the printable examples of Gufeldian humour will set the tone. The first concerned The Kremlin Nightclub, formed in 1974 to increase intake of foreign currency. The opening night was a huge sell out success, the second night less so and nobody turned up at all for the third outing. The club manager was duly summoned to explain this dismal state of affairs to the party chairman.
“Well, Comrade, why have the figures declined so catastrophically?”

The manager vigorously defended himself: “It’s a mystery, Comrade Chairman. No expense was spared. Superb decor in Russian imperial style. We served the best champagne, highest quality beluga caviar, we hired Moscow’s top band and the best chef, straight from the Metropol.”

“And the stripper?” quizzed the chairman.

“Impeccable”, the manager shot back, confident that he was on particularly safe ground with this line of questioning: “her loyalty to the state is beyond doubt and she has been a card carrying Party Member since the 1917 Revolution.”

The next anecdote was claimed as God’s own truth. I have my doubts. As the USSR opened up, ambitious German businessmen began to frequent Moscow, and the Russians, eager for foreign currency, were determined to maximise their opportunities. On one such visit by a German banker, the Russian hosts were particularly determined to make a good impression and to fulfil any wish or foible their guest might express.

The German banker entered into the spirit of proceedings and demanded to shoot a bear. Wild bears in the Moscow woods might have been prevalent during the reign of Ivan the Terrible, but not in the 1970s. Nothing daunted, the Russian hosts arranged an excursion to the woods and positioned the banker strategically in a tree at the meeting of three forest paths.

Ingeniously, they had acquired an old, rather moth-eaten circus bear, and surreptitiously launched it in the banker’s direction. All was going well, as the bear lumbered towards the banker, until a little old lady cycled along the same path. The bear leapt up, terrifying the cyclist, who promptly abandoned her bike and fled. She was evidently not accustomed to meeting bears on her daily ride.

Being a well-trained performer from the Moscow State Circus, the bear righted the bike, mounted it and now proceeded to cycle towards the German banker, who would probably have completed his dream of shooting a wild bear, had he not dropped his gun, fallen out of the tree in shock at seeing his bear cycling towards him, and broken his leg. The business deal is said to have been called off.

I conclude with the game from 1974, where Korchnoi adopted my suggestion to annihilate Karpov, which led to my appointment as chief second, entrusted with analysis of openings, and Head of Delegation for the 1978 World Championship.