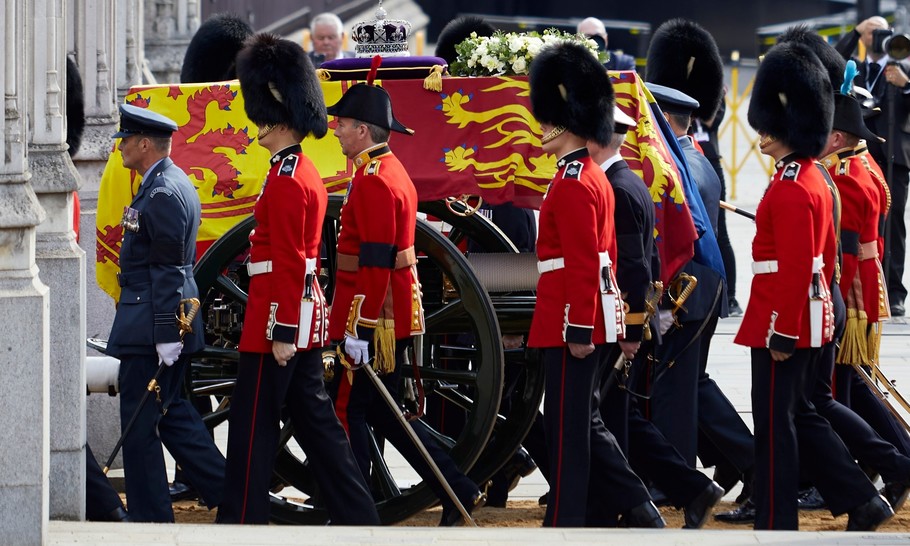 Ten days of national mourning for the Queen touched and cheered a depressed, divided and anxious country. Thanks to the dedicated efforts of the BBC, everything that should have been said was said, and heard. In addition, and less noted, the pageantry and media commentary demonstrated to the world the unique nature of British governmental institutions, the complex relationship between Church and State, the subtleties of its constitutional monarchy —including royal protocol that placed President Biden in Westminster Abbey fourteen rows back, behind the fifteen Commonwealth countries of which the Queen had been Head of State. Heartening as were the shared expressions of genuine grief, the ceremonies concealed certain tensions.

Throughout the period of mourning and her funeral rites, the Queen’s “servant leadership” was recognised and applauded, her rigorous compliance with constitutional norms praised. She was acknowledged as the constant focus of togetherness during the transition from empire to commonwealth, a calming, reassuring voice in a changing world. But she was also Commander-in-Chief of the Armed Forces, colonel-in-chief of sixteen British army regiments and many Commonwealth units. A living Britannia, as well as a staunch practising Christian and Supreme Governor of the Church of England. The public ceremonies accordingly tried to strike an extraordinary balance between military choreography and Christian liturgy. Yes, it was extraordinary.

The expression of the State’s military power during a British State funeral is very distinct from displays of the latest military technology at, say, a Russian May-Day parade, where the threat is overt. Spectators at such parades in Moscow clearly see what the State is all about: power. But in London and Windsor the dress uniforms, the seductive colours and headgear, the Grenadier Guards, the Royal Company of Archers, the Household Cavalry, the many gun salutes and the Royal Navy’s gun-carriage, the different steps and drum-beat rhythms, all spoke of controlled, reassuring power, the strength of restraint, of discipline, soft power with swords. It was military power, nonetheless.

Before Archbishop Geoffrey Fisher anointed the 25-year-old Elizabeth II with chrism in June 1953, before she became “Defender of the Faith”, she had been a member of the Armed Services. Towards the end of World War II she took the first opportunity aged 18 to join the Auxiliary Territorial Service (ATS), training as a driver and mechanic and was awarded the rank of captain. One BBC commentator even described her later reign as “burnished by war”.

The Queen’s family has intimate connections to the Armed Forces, some having been on active service. Prince Andrew’s civilian clothes at the State funeral were a public expression of his disgrace and his family’s disapproval — though he did not ask to wear uniform, it must have pained him not to do so. A military profile is expected of the monarch and of close members of the royal family.

Why this martial identity? Monarchs once led their troops into battle. Today a constitutional monarch represents or embodies the State and the prerogative of the State is sole possession of the means of coercion needed both to defend the realm and to maintain law and order. At the same time, because we have a national, established Church, the monarch is Defender of the Faith, a faith which enjoins loving our enemies and worships “the Prince of Peace”. We are so accustomed to this dual role that we overlook any tension between monarch as head of a national Church and monarch as head of State, between the practice of Christianity and the practice of war.

The Queen’s State funeral service in Westminster Abbey was almost defiantly Christian, as if by way of counterweight to the spectacular military display we had seen up to this point. It was, as the Queen had wanted, within the magnificent setting of the Abbey, the ordinary simple Church of England prayer-book service accompanied by wonderful choral music. The Archbishop of Canterbury took the unprecedented opportunity to preach an evangelical sermon to a vast national and global television audience . “Jesus – who in our reading does not tell his disciples how to follow, but who to follow – said: ‘I am the way, the truth and the life’. Her Late Majesty’s example was not set through her position or her ambition, but through whom she followed.”

Words spoken a few brief lines into his sermon. A little after came: “People of loving service are rare in any walk of life. Leaders of loving service are still rarer. But in all cases those who serve will be loved and remembered when those who cling to power and privileges are long forgotten.” One wonders how the many leaders attending, the Queen’s former prime ministers and politicians in office, fellow royalty, heads of State and dignitaries, felt as they listened to that. But around the world, around millions of television sets, there must have been cheers, or at least silent assent.