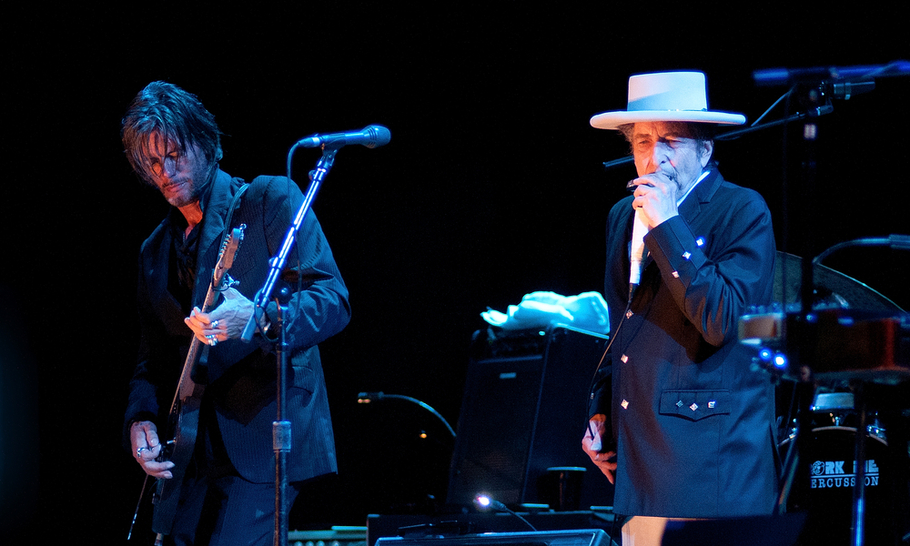 In his second letter to the church in Corinth, St Paul notes that God pours his treasure into earthen vessels. How could it be otherwise? God is maximally good, and we are intrinsically fallen. Paul himself was a case in point: the primary persecutor of the early church conscripted to become its greatest advocate. God has a sense of humour. He uses the most unlikely of us to make his point. The Christian God is alive with us in the here and now and his mechanisms of revelation will sometimes take an unlikely form.

Bob Dylan’s Changing of the Guards was written in 1977 at a time when his faith was evolving into solid (which in his case means “written”) form. In the song, Dylan proposes a sequence of images which describe the transition of the Old Covenant into the New. He offers a supremely exquisite theological metaphor in which Israel is a beloved maid, captured by pagans. God is a “captain” mired in unrequited love for the maid, still hopeful that his “love will be repaid”. The maid is systematically violated by the pagan practices – her head is shaved, and she is forced to lift her veil.

Towards the end of the song the Jesus-figure announces himself:

“Gentlemen”, he said, “I don’t need your organisation

I’ve moved your mountains and marked your cards

But Eden is burning

So either brace yourselves for elimination

Or else your hearts must have the courage for the changing of the guards..”

Dylan’s presentation of Jesus here is bracingly faithful to Biblical orthodoxy, an orthodoxy which has surrendered itself to liberal fashion. The second person of the Trinity emerges from the Gospel accounts as a disturbing, almost sinister, figure who (according to Matthew) claimed to be bringing not peace, but a sword.

Most people miss this. Dylan does not. In a later song In the Garden, he has Jesus say this:

“Pick up your bed and walk, why must you criticise?

Same thing my Father does…I will do likewise”

Once again, as an item in Bob Dylan’s theology, Jesus is full of snark.

Jesus could never have been a comfortable figure because he was demanding something: repentance. And repentance is properly understood here by the original Greek: metanoia, the obligation to discard your current mind and acquire a new one. This is the proper changing of the guards: to invert completely everything you have previously believed; in order to do that your heart must be full of courage. And you must abandon everything.

The historical Jesus had to have been a sinister figure because of his central claim: that he was, and is, God. Not a mere messenger, nor a privileged act of creation, but God himself. We have a contemporary orthodoxy which would disentangle Jesus from the theological and deliver him into the ethical: that Jesus wasn’t really God, but was a useful vehicle for certain spiritual truths. Yet this is not possible. As CS Lewis argues, either Jesus was God, or he was evil, or at best a madman. His claim to divinity requires that we choose.

And we will always be uncomfortable with the choice. Because that’s the way choices are supposed to be when they touch on the really important stuff.

If Jesus claimed to be God then it follows that he was a figure who crashed all available ways of thinking. That he made that claim is controversial in some circles. There are some scholars who dispute Jesus saw himself that way. But what Jesus did claim was the ability to forgive sin; and we know that he was a child of the Temple and therefore knew that only God could offer that absolution.

Again: mad, bad or God. All options are sinister.

So, here’s the obvious response: what right do I have to climb inside the mind of a genius and report to you what he is thinking? How do I know that Dylan had any of this in mind when he wrote that song and came up -possibly on the back of an envelope – with the lyrics I am “praying in aid”?

The objection has some force. The critic, Susan Sontag, suggested that interpretation involves a sort of violence against art. Dylan probably did write the song with a set of intentions that have nothing to do with my presentation of it. But that, in a way, is my point. Dylan himself has said that he never knows exactly where his lyrics come from. So, if he’s not prepared to offer a finality here, then why should the rest of us not speculate? Music speaks to us from another place.

It doesn’t, in the end, matter what Dylan “intended” when he wrote those words, if they are a lyrically beautiful announcement of the strangeness of the ultimately beguiling and historical figure that we all agree to call Jesus of Nazareth.

When people look at Britain now, what do they see?

Off with their heads