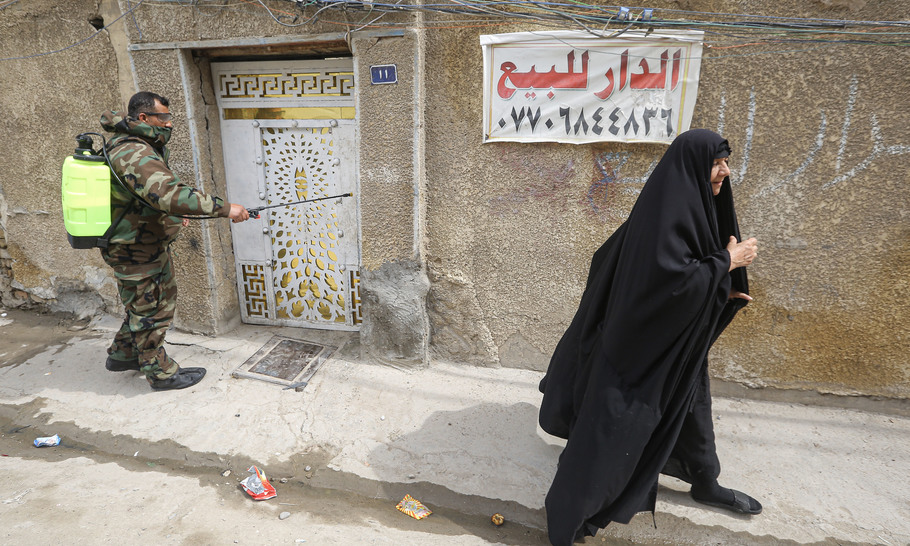 Simmering tensions between the United States and Iran risk boiling over in Iraq, despite coronavirus outbreaks swamping both nations. In mid-March, dozens of 107mm Katyusha rockets were fired at Camp Taji north of Baghdad, injuring three US soldiers and two Iraqis. It was the second attack on the base in a week, where foreign troops are training Iraqi security forces. In a previous strike, rockets killed two American soldiers and one from Britain, and left 14 others injured. No one has claimed responsibility for either action, yet Washington blames the Iran-backed Kataib Hezbollah militia.

In response to the initial attack, President Donald Trump authorised air raids aimed at Kataib Hezbollah weapons storage facilities. US Central Command tweeted images of the destroyed targets, quoting its commander, General Frank McKenzie: “We have effectively destroyed these facilities and expect that they no longer contain the type of advanced Iranian-supplied weapons that were used in the KH attacks.”

Local officials said the strikes killed three Iraqi soldiers, two policemen and a civilian. Among locations bombed was an airport under construction in Karbala, a holy city for Shi’ite Muslims. The civilian killed was 23-year-old guard Karrar Sabbar. He leaves behind a wife and two children.

“Fatalities suggest that these air strikes were not as precise as the US said that they were,” said Al Jazeera’s Simona Foltyn, reporting from Baghdad, “and this is rather embarrassing for the US because the Iraqi army and police are its partners under the coalition to fight ISIL. Essentially, rather than deterring Kataib Hezbollah and other Iranian-linked groups from conducting further attacks on US servicemen, the US in fact ended up further rupturing the relationship between its Iraqi partners and its presence here in Iraq.”

Iraq condemned the unilateral military action, with President Barham Salih calling it a “violation of national sovereignty”. The Iraqi Joint Operations Command described it as costing “the lives of Iraqi fighters while they were doing their military duty” and as a breach of “Iraqi sovereignty and [contrary to] principles of cooperation and alliance between Iraqi security forces and US forces”.

“We also refuse that the American forces or others take any action without the approval of the Iraqi government and the commander in chief of the armed forces,” it added. “[Such an attack] weakens the Iraqi State’s ability to provide its own security… This necessitates the speedy implementation of the Parliament’s decision on the issue of the coalition’s withdrawal.”

US-Iran relations have slumped since an American contractor was killed by a rocket attack in December. The US responded with air strikes killing 80 militia forces near the Syrian border. The US embassy in Baghdad was then attacked and in early January, Trump ordered the assassination of Iranian General Qasem Soleimani. That attack also killed Kataib Hezbollah commander Abu al-Muhandis. Five days later, Iran retaliated with ballistic missile strikes on US forces based in Iraq, leaving more than 100 troops with traumatic brain injuries.

The most recent Camp Taji rocket attack was the 23rd against locations in Iraq housing US soldiers and diplomats, since October. A de facto spokesman for Kataib Hezbollah warned Iraqi security forces to distance themselves from US troops and facilities, suggesting more attacks are imminent and a spiral of violence inevitable.

The Iraqi parliament demanded the US  withdraw from the country following the drone attack on Soleimani, but the Trump administration has refused. “At this time, any delegation sent to Iraq would be dedicated to discussing how best to recommit to our strategic partnership — not to discuss troop withdrawal,” the State Department said.

“The only solution for the US is to implement the parliamentary decision and leave,” the Washington Post reported an Iraqi official as saying. “If the US leaves, then Iraq will be able to deal with these groups, but with this situation it’s chaos and undermines the state.”

The United Nations Assistance Mission for Iraq urged restraint from all sides as the only way forward. “These ongoing attacks are a clear and substantial threat to the country, and the risk of rogue action by armed groups remains a constant concern,” it said.

“Beyond the immediate security threat, this also takes critical political attention away from urgent unfinished domestic business. The last thing Iraq needs is to serve as an arena for vendettas and external battles.”

There are around 5,000 US soldiers currently in Iraq, which has been the central theatre for its clashes with Iran. Two aircraft carriers will remain in the Middle East region for the foreseeable future, while Patriot anti-missile batteries and other weapons are expected to arrive in Iraq soon.

The volatile situation risks rapid escalation, exacerbated by the limited communication between the nations. Unlike recent tensions between Russia and Turkey over northern Syria, where there is both direct communication and an active back channel, this is all but non-existent between Washington and Tehran, leaving little chance for diplomacy to succeed.

Back in the United States, the threat of conflict with Iran led Congress to pass — on what was coincidentally Soleimani’s birthday (March 11) — a bipartisan resolution directing the president not to use military force without its authorisation, just as it had previously done with regards to Yemen. The Commander-in-Chief has promised to veto the measure, warning that if his “hands were tied, Iran would have a field day”.

Chairman of the House Foreign Affairs Committee, Representative Eliot Engel, said the resolution “sends a clear message that the American people don’t want war with Iran and that Congress has not authorised war with Iran”.

Initially imposed following Trump’s withdrawal from the nuclear deal in 2018, the new measures add further stress to a country in the grip of coronavirus infections and fatalities.

It’s difficult to deny the analysis of Simon Tisdall in the Guardian: “Displaying the sort of unthinking bellicosity that has characterised his tenure as US Secretary of State, Mike Pompeo chose last week — a time of unprecedented global turmoil — to impose yet more unilateral sanctions on Iran. This was akin to pouring petrol on a burning building, then waiting to see how big an explosion ensues.”

The pandemic will soon, too, overwhelm the US. Thoughts of war and schoolyard one-upmanship during such a time must be forgotten by both nations, and their actions must mitigate the threat.