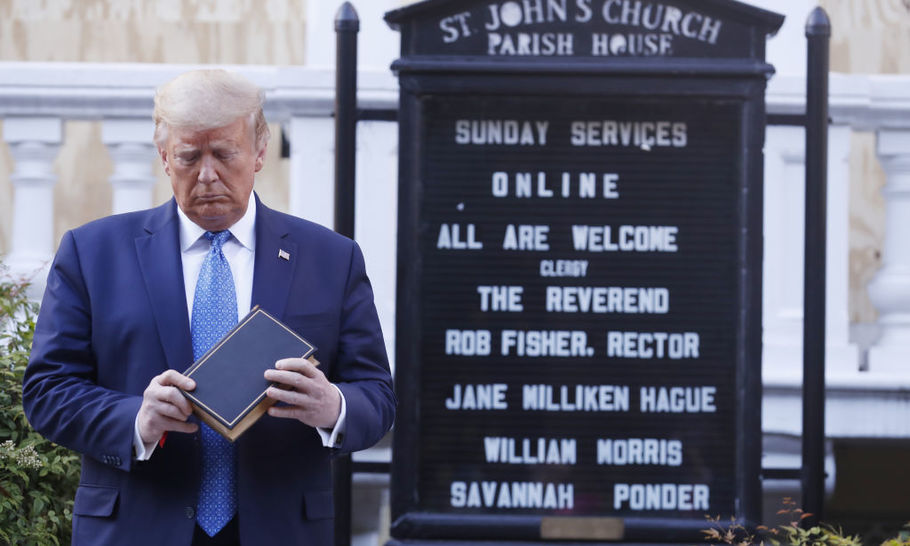 One in Four American adults identify as a born-again or evangelical Christian. At 22 per cent of the population, Roman Catholics are almost as numerous. An insidious US Christian nationalism is abroad. Religious influences amongst almost half the voting population in November 2020 will matter.

Exit polls at the 2016 Presidential election, commissioned by the respected Pew Foundation, showed 81 per cent of evangelical Christians voted for Donald Trump; disaggregated, 60 per cent White Catholics and 21 per cent Hispanic Catholics. Compared with Obama in 2012, Hillary Clinton lost between 3-5 per cent of such voters. Overall, Trump’s White Christian vote was older, poorer and less educated. His support increased with reported frequency of church attendance.

How, you might ask, can this be? Does the Christianity of White America make no difference to the kind of person sought as President? Not entirely. Two thirds of White Catholics in a March 2020 Brookings survey thought that the statement Trump “fights for what I believe in” corresponded well, or fairly well, with their beliefs, notably about abortion and gay marriage. They also believed they were winning the “culture wars”, but unsurprisingly had mixed feelings about Trump’s personal conduct. But evangelicals tended to discount his conduct on grounds that God often chose flawed people for his purposes. Some, echoing Israel’s Netanyahu, compared Trump to Cyrus the Great, who liberated the Jews from their Babylonian captivity 2,500 years ago.

In America’s swing States, the percentage of evangelicals becomes important: 29 per cent in Florida and Rust Belt Ohio and 25 per cent in Michigan. In 2016 Trump won Michigan by less than 50,000 votes. A recent poll in North Carolina, where 35 per cent of the population are evangelicals, showed voter intentions are complex. Participants were asked about a range of issues, including healthcare, the environment, immigration and gun control. On abortion 63 per cent of evangelicals preferred the Republican Party compared with 36 per cent of non-evangelicals, but this did not necessarily translate into Party registration. A significant number of evangelicals who voted Democrat preferred the Republican position on abortion. And this creates a vulnerability for Catholic Joe Biden who performed a U-turn to support “reproductive rights” to win the Democratic Party nomination.

Nine Republican States, seven of them in the South, pushed through restrictive abortion laws in 2019. Some of these — the so-called “heart-beat bills” — aimed at ending abortions after 6-8 weeks. But photo-ops of Mr. Trump brandishing a Bible and eyes shut as pastors prayed with him may not be entirely cynical. Trump watches a lot of television and in 2002 learned about the Prosperity Gospel from the televangelist Paula White. At the time, he was buying prime real estate with the multi-million inheritance from his father. The Prosperity Gospel with its promise of faith bringing rich financial rewards rang a bell. Paula White undertook Bible readings with Trump. In 2017 she delivered the invocation at Trump’s inauguration. In October 2019 he appointed her to lead his White House Faith and Opportunity Initiative.

Evangelical numbers also explain Trump’s public support for Netanyahu, the symbolic move of the US embassy to Jerusalem, and his partisan “peace plan”. Christians United for Israel (CUFI), an umbrella body founded in 2006 by John Hagee, pastor of the Cornerstone church in San Antonio, Texas, claims some seven million members. In Jerusalem Countdown published in 2007, Hagee plays on the Christian Zionist theme of Armageddon, the final battle being fought out in Jerusalem with, according to him, the head of the EU as the anti-Christ. Hagee also calls for a pre-emptive strike on Iran as a precondition for the desired Second Coming of Christ (though CUFI has since tried to move away from such eschatology). Here is Vice-President Pence’s speaking to CUFI about Trump: “a president who is fighting every single day to defend faith, restore freedom, and strengthen America’s unbreakable bond with our most cherished ally, Israel”.

US evangelicals cut across denominations and are far from homogenous in their beliefs and political attitudes. Many are traditionally compassionate in their social attitudes. There are also rising numbers of politically engaged groups of “progressive” US evangelicals who regard work for social justice and peace as central to the Gospel message. Take Dr. Rick Warren for example, pastor of the 30,000-strong Saddleback megachurch in California whose global peace plan to promote social justice was launched in 2005.

Each wing of the evangelical movement has its advocacy groups, pastoral action, think-tanks and publications. But there is no denying that the evangelical infrastructure supporting Trump, with its thousands of radio stations and televangelists, is part of the biggest religious ecosystem in the US today, and represents the highest level of political organisation and ambition, promoting a Christian nationalism sometimes synonymous with White Nationalism.

How will the Trump campaign play these final six months? He’s in trouble with Coronavirus. The evangelical vote may prove pivotal. Will Trump star in TV ads as saviour of America’s soul, a — flawed — Emperor Constantine? Too risky. But there will surely be a Cambridge Analytica-style deployment of extensive mined data targeted on evangelical voters. Evangelical and Catholic Democrats who show the strongest signs of approval of Republican positions on abortion and gay marriage will be digitally singled out for attention. Older black and Hispanic Christians, perhaps detachable from Biden, will be wooed.

It’s dangerous. The evangelicals in Trump’s court erode the separation of Church and State. Appeals to religious ideals and emotions are powerful and rarely yield to fact and argument. Before it is too late and in a concerted, powerfully appealing ecumenical response, US Church leaders must clearly, passionately and theologically counter the Christian nationalist power seekers who support Trump. Because he fights not for evangelicals or for Christian values. He fights only for himself.