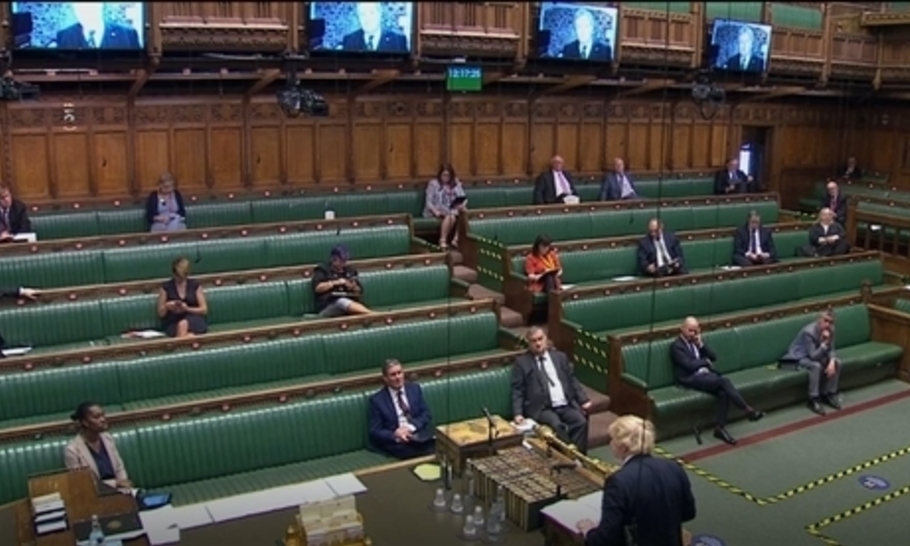 At one bound, we are free. The moment when Boris Johnson announced the end of lockdown to a socially distanced House of Commons was low-key — rightly so. It was also a rare moment of unity across the aisle: Sir Keir Starmer did the statesmanlike thing. For most people the past quarter has been an incarceration, rather than, as he put it, a “hibernation”. There is still a long way to go before anything like normality can return. Our lives have been changed forever. And the death toll, already higher than was feared, is still rising.

Yet there was still a glint of triumph in the Prime Minister’s statement:  “ The bustle is starting to come back. A new, but cautious optimism is palpable.” It was a characteristic oratorical flourish that betrayed the sense of relief that he, in common with all those who have survived a bout of Covid-19, must feel. He knows that the focus has imperceptibly shifted to a new challenge: how to revive the animal spirits of our flagging economy. Our hopes are at last prevailing over our fears.

The inquest has yet to take place, of course. As Jay Elwes argued here yesterday, there must be a “reckoning with the truth” for all those in authority, and for the Prime Minister in particular. Was he negligent, even insouciant, in the initial stages of the pandemic? Did he ignore scientific advice to introduce the lockdown weeks earlier than it was? The evidence so far published suggests that Sage, the Scientific Advisory Group for Emergencies, was never overruled by the Government, either before or during the crisis. Whatever else the PM may have withheld from us, when he claimed to be “following the science” he spoke no more than the truth — if by “science” we mean the expert consensus.

Yet questions remain about why Britain was seemingly slow to react to the warning signs. Whether Boris Johnson was guilty of sacrificing lives for the sake of popularity, as has been claimed, or will emerge with his reputation intact, will be determined in due course by a public inquiry. By the time that reports, many months or even years hence, the world will have moved on. In the meantime, the court of public opinion will make up its own mind. Some believe that elected politicians ought to have been less deferential towards unelected scientists. Others are adamant that too many risks were taken, with ultimately fatal results, when the wiser course would have been to err on the side of caution. We know much more now than we did during the gathering storm in March, of course, but politics is a rough old game in which the wisdom of hindsight is liberally deployed. Boris Johnson has frequently made use of it himself, indeed; he can hardly complain if those whom he has vanquished by fair means or foul now seek their revenge.

There is much, though, that we still don’t know. Even as Britain ascends blinking into the sunlight, like the prisoners in Beethoven’s Fidelio, to enjoy our liberation, much of the world is only just beginning its descent into the dungeon. Globally, almost ten million people have tested positive for Covid-19; nearly half a million are known to have died of it. But the true figure may be much higher. China has been secretive from the start and is still arresting journalists and others who challenged the official version of events. Well over a million people there were diagnosed with “flu” last December. How many were really suffering from the new coronavirus? Death tolls there and in many other countries, even in Europe, must be treated with caution. In this pandemic, nothing is more political than mortality.

The question remains: why was the UK hit harder than most of our neighbours? We do not know, any more than we know why Belgium suffered so much worse than neighbouring Holland. The full answer is bound to be complex and so, for most of us, boring. Levels of medical preparedness, pharmaceuticals, demographics, social structures and psychologies all play a part. But the single factor that may matter most is money. In health, as in most things, you get what you pay for.

The best example is the most obvious: Germany. In comparison with Germany, one fact stands out: the Federal Republic invests 11.2 per cent of its (much larger) GDP in healthcare, the UK just 9.8 per cent. Germany ranks fifth in the OECD for salaries paid to doctors and nurses, Britain 13th. If salaries are compared using PPP (purchasing power parity), the disparity is even greater: the Germans are fourth, with spending per capita at £4,791, the British 18th, at £3,357. General practioners in Germany can expect to earn £147,950 per annum; here, GPs earn £128,849. Salaries for a fully-qualified hospital nurse there are £44,944; in the UK, £40,281.

There are many reasons why Germany spends more on healthcare than Britain, but the most salient is the mix of private and public provision for which a patient-led insurance-based system allows. The superb staff of the NHS have been the unquestioned heroes of our lockdown, but the limitations of our state health bureaucracy, especially Public Health England, have been cruelly exposed. The decision to decant vulnerable patients into care homes without testing undoubtedly cost many lives. It follows that an important part of our reckoning with the truth must be to reconsider every aspect of our health service: its structure, its leadership, its funding and its capacity to respond to public health emergencies.

We should not forget the highs as well as the lows of this crisis. That Britain was not the moribund Soviet Union, as depicted in Chernobyl, is shown by many incredible feats of improvisation that limited the human damage done by the pandemic. NHS hospitals were never overwhelmed, as some of their counterparts have been elsewhere. It is no accident that researchers in Oxford were the first to come up with an effective and affordable treatment for Covid-19 patients. British science and medicine are still among the best.

It is also the case that no country on earth is more self-critical than Britain. Culpability will be found out and punished, wherever it resides. We will learn from our mistakes, without fear or favour. The liberties we are now reclaiming will also be our strongest shield against future threats to humanity.