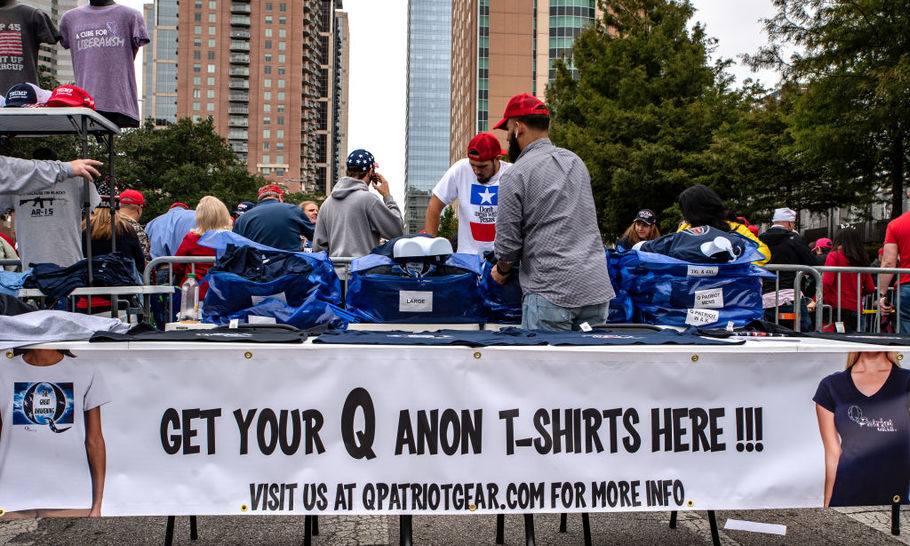 There is a good chance that when the next US Congress is sworn in, it will include at least one member who is a believer in the “QAnon” conspiracy — the notion that there a secret global pedophilic sex trafficking network involving all kinds of powerful politicians and celebrities, and that Donald Trump is working behind the scenes to bring the whole network down.

Marjorie Taylor Greene won the runoff for the Republican primary in Georgia’s 14th Congressional District, a heavily Republican corner of the state where in 2018, Republican Tom Graves beat Democrat Stephen Foster, 76.5 per cent to 23.5 per cent. Graves is retiring after this term.) In 2017, Greene declared in a YouTube video, “there’s a once-in-a-lifetime opportunity to take this global cabal of Satan-worshiping pedophiles out, and I think we have the president to do it.” Greene has never renounced the theory, and recently retweeted video of President Trump in which he gave a long and meandering answer about the conspiracy theory that included just about everything except a denial that any of it was true.

REPORTER: What about the theory, this belief that you are secretly saving the world from this titanic cult of pedophiles and cannibals? Does that sound like something you are behind, or…?

PRESIDENT TRUMP: I have not heard that. Is that supposed to be a bad thing or a good thing? I mean, you know. If I can help save the world from problems, I am willing to do it. I’m willing to put myself out there. And we are actually! We are saving the world from a radical left philosophy that will destroy this country, and when this country is gone, the rest of the world would follow. The rest of the world would follow. That’s the importance of this country. And when you look at some of the things that these people are saying, with defund the police and no borders, open borders. Everybody just pour right into our country, no testing, no nothing. You know, you talk about testing, no testing. Mexico’s, you know, is a very high rate of infection. Next week, the wall is going to be 300 miles long. Our numbers are extraordinary on the border. And this is through luck perhaps, more than talent, though the talent is getting it built when one party refuses to allow it. You don’t hear talk about the wall anymore. But I will say this, we need strength in our country, not weakness. Too much weakness.

The above-it-all pundit pose at this point is to shake heads in disapproval and observe we’re in a golden age for conspiracy theories — as confirmed by Politico and the Guardian and Josh Marshall and James Poulos. None of those essays cheer on conspiracy theories, but seem to simply accept it as an almost inevitable byproduct of the Internet, modern anxieties, unscrupulous politicians and figures who want to profit from paranoia.

But it’s a bit worse than that. If Trump loses, if Greene somehow loses in the general election, if YouTube and other social media companies become much more censorious, then the cultural environment that convinced so many Americans that QAnon is real or could be real would still exist. It’s the same cultural environment that enabled far too many Americans to believe that 9/11 was an inside job by sinister forces within the US government, and that Barack Obama was born in Kenya and secretly smuggled to Hawaii, and, as one New York magazine cover piece argued, that Donald Trump has been an asset of Russian intelligence since 1987.

This “golden age for conspiracy theories” is a reflection of the fact that a growing segment of the populace fails to understand how anything in the world works. They see omnicompetent sinister forces behind every corner, even as the world offers endless examples of the opposite — troubling incompetence in nearly every corner of society.

For example, many conspiracy theories involve “the government” secretly being up to no good in some form or fashion and hiding it all from a naïve and unsuspecting public with ruthless efficiency. But if you look at government at any level, you’ll find sluggish bureaucracy, blabbermouth employees, arrogant mismanagement, wasteful spending, deadlines missed, endless meetings and working groups and commissions and soul-crushing inertia. We never saw the Cigarette-Smoking Man on The X-Files filling out paperwork to comply with federal procurement contract regulations. A former military official once noted the most unrealistic aspect of the Stargate television series was not the Pentagon’s access to a secret ancient portal to other planets but that the US Air Force would be able to manage the program without the other branches of the military finagling a role to get part of the budget.

Governments do engage in coverups, but the operations rarely look and turn out like the methodical, ruthless, chillingly effective assassination squads of the Hawkins National Laboratory in “Stranger Things”. They look much more like the shambling bureaucratic morass of lies and cover-up as depicted in “Chernobyl“.

Another underdiscussed aspect of conspiracy theories is how much the adamant faith in the existence of all-powerful sinister forces lets the believer off the hook for their own problems. Just about everyone has aspects of their life that frustrate them — a lack of career success and money, tensions with family, health problems, a sense of being unimportant, disrespected, unappreciated. A thorough and honest self-assessment would probably require an emotionally difficult reckoning with bad choices and habits. Individual responsibility is arguably one of the most frightening concepts on earth, because it means what we don’t like about our lives is really our own damn fault, and that we’re not as smart, virtuous, wise, careful and brave as we like to think we are. It’s much easier, and strangely reassuring, to look at our failure to achieve our dreams and conclude that we were held back and sabotaged by the big corporations, the Israelis, the Bilderbergers, the media, the Freemasons.

The last aspect of conspiracy theories that gets insufficient attention is how frequently real life, with verified honest-to-God truth comes just close enough to some of the popular conspiracies to convince some people. QAnon is paranoid nonsense, but the idea of a powerful celebrities and politicians being involved in an open secret of brazen sexual abuse doesn’t feel quite so farfetched after the revelations of Jeffrey Epstein and Harvey Weinstein and R. Kelly and an actress from the superhero series Smallville becoming a recruiter for the utterly bizarre “Nxivm” cult.

Almost every conspiracy theory can draw on some sort of unnerving verified exposed skullduggery. Russia really was and is trying to influence American elections and exacerbate existing political social divisions in Western countries. Whether or not the coronavirus first emerged from a lab in Wuhan, China, American officials who visited the Wuhan Institute of Virology in 2018 really did worry about the laboratory’s safety protocols and practices. The US National Security Agency really did have far-reaching secret domestic surveillance programs. The Catholic Church really was covering up and downplaying a horrific series of sex abuse scandals. Jeffrey Epstein’s suicide really did occur in just about the most suspicious circumstances imaginable, with his cellmate removed, the security cameras not working, and the guards asleep.

Joseph Heller wrote in Catch-22, “just because you’re paranoid, doesn’t mean they aren’t after you.” Conspiracy beliefs are enabled in part by every lie by every elected official and corporate executive, every clumsy coverup of a scandal, every bit of misleading spin, every retracted media report and every celebrity whose unsavoury truths are protected by a cadre of well-paid lawyers and public relations professionals.

Bad behavior and chronic, habitual dishonesty by powerful people in our societies created a vacuum where public trust used to be — and paranoid conspiracy theories filled that empty space. Public belief in those seemingly kooky theories won’t wither away until public faith in its leaders’ honesty is restored. That will be a long and difficult task.